The Cards to a Bright Future 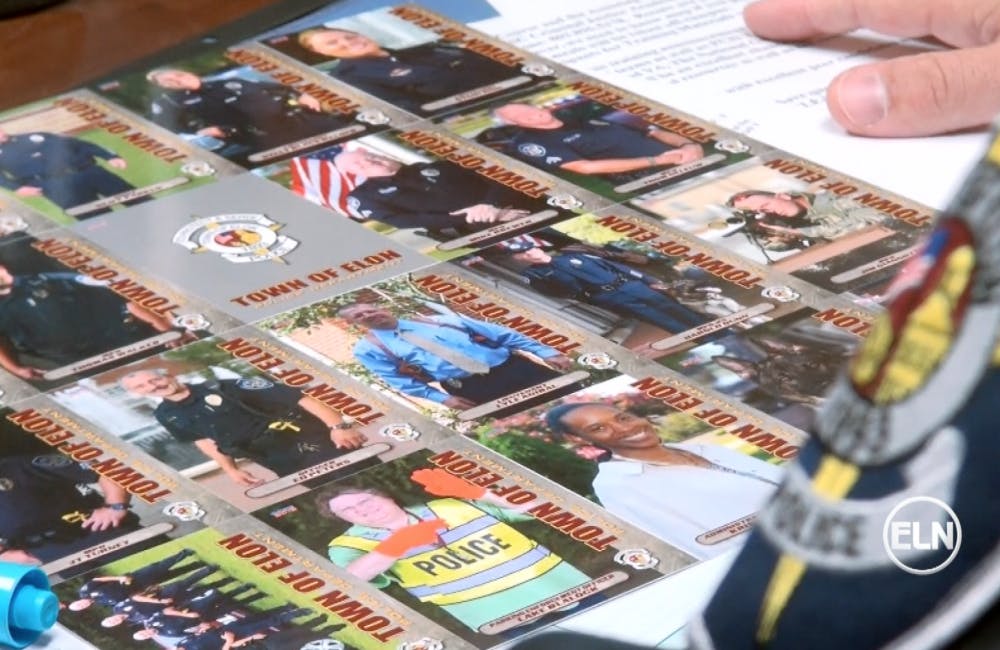 "It's funny because you'll go out there and a lot of the kids are so shy they won't even ask you for your card." Elon Town Police Lieutenant James Perry says. "They kind of just walk up but by the time they're done, they're interacting and having conversations so I think it's meeting its purpose."

"What they need to do is collect every police officer's card," Perry says. "For the children who do, we throw them a pizza party and we have games and prizes and just basically have a day where they can hang out and have fun."

The party in mid-December is open to the first 10 kids who collect all the trading cards, and is held at the Elon Elementary School. All available officers attend the party where the kids are treated to pizza and cake.

"It's really fun," Elon Elementary 3rd-grader Case Parker says about the program. "I'm almost done, I just have to get one more."

Patrol Lieutenant James Perry has been the backbone of the trading card program since he started it several years ago. He says that he's gotten a lot of positive feedback about it from parents of Elon Elementary students and believes the program has made a difference.

"These are the kids that are going to grow up and be members of our community so if we can instill that rapport now, when they get older," Perry suggests, "they'll hopefully still trust the police and be able to feel like they can talk to them if they have a problem."

Each year, Perry tries to think of new ideas to build the program.

"There's a card this year that has our badge on it," Perry explains. "What I did for this one this year is I gave each teacher 30 cards and you have to earn that card from your teacher."

In addition to chatting with police officers, these kids must perform well in the classroom for the final trading card.

"For the card from your teacher, if you do something good, she gives it to you," Parker says excitedly as he shows off his special card.

As for the other cards, the kids can find officers at the police station or at their school or elsewhere but they are given a list of "Do's" and "Dont's". "The 'Do's' obviously include approaching an officer and asking them for his or her trading card," Perry explains. "The 'Dont's' include approaching a police officer when they are involved in an emergency."

Though most kids know when to ask an officer and when to not, some just can't wait for a card.

"We were actually working a traffic collision and it was very, very heated," Perry says. "Both parties were arguing and I'm trying to separate them and this kid literally comes up, and I'm like this [focused on people involved in collision] and I look down and there he is. He says, 'Can I have your trading card?' And [chuckling] I'm like, 'Hold on just one minute.' So we had to get everything straightened out and then of course, we were able to give it to him."

The targeted date for the pizza party is December 12th. Perry says that there will also be a K-9 demonstration for the kids at the party.