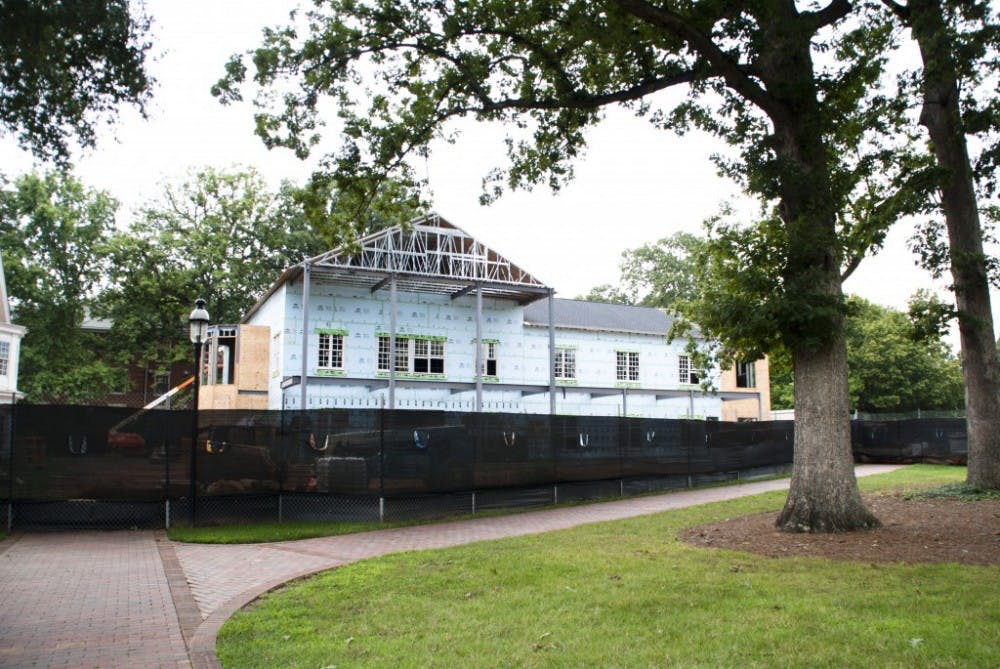 [quote]If we’re interested in living in a world full of peace that is lasting and real, we have to be understanding of other people’s religions - Jan Fuller, university chaplain[/quote]

Even on a college campus where multiculturalism is welcomed, it takes a conscious effort to create an environment that is wholly diverse and accepting.

Members of Elon University’s faculty and student body are now exploring ways an education about a wide range of religious traditions can increase and spread the understanding of various ideologies prevalent on campus.

“Religion is fundamental to who we are as human beings,” said Jan Fuller, university chaplain. “If we’re interested in living in a world full of peace that is lasting and real, we have to be understanding of other people’s religions.”

The construction of the Numen Lumen Multi-Faith Center, scheduled to open in early 2013, will provide a space to house all the university’s religious programs and practices, according to Fuller.

Bringing together religious groups that would not ordinarily associate with one another is a goal of the Multi-Faith Center, according to Fuller.

“When Christians are in one room, Jews are in another and Muslims are in a another, we’re all going to meet and we’re going to talk to each other,” Fuller said.

But, the intention behind the center is in no way to weaken individual students’ devotion to their own religions, Fuller said. Accepting the beliefs of others does not have to mean adopting them as your own.

“There may be people that are nervous that they will have to give up their claim to truth,” Fuller said. “I can imagine that sometimes your truth will be very different from my truth, but we aren’t afraid of that. We can learn to talk about it.”

Additionally, the center may help to advance student knowledge of the intersections between all types of individuals, according to Fuller.

Lynn Huber, associate professor of religious studies, agreed there are many ways in which religious diversity can deepen understanding of other forms of diversity.

“A lot of religious tradition intersects with the ways we think about gender and sexual diversity,” Huber said. “Religion shapes the way people approach these issues.”

The faculty of Elon’s religious studies department has made an effort over the last five years to be inclusive of a variety of religions, Huber said.

The course requirements for religious studies majors are intentionally designed to introduce students to a wide range of traditions.

“I think our department as a whole thinks that someone who studies religion needs to be able to engage more than one religion in a thoughtful way,” Huber said.

However, it is important to realize that an understanding of religious diversity is necessary to many majors beyond religious studies, she said.

Huber is the acting director for the Center for the Study of Religion, an initiative to promote the study of religion across campus. It will be housed in the Numen Lumen Multi-Faith Center upon its opening this fall.

“We really want to highlight how the study of religion happens in different majors,” Huber said. “We want to be a resource for students of all majors who are interested in studying religions, and we want to find ways of supporting that (interest).”

Senior Hunter Benson, a religious studies major, has seen the lessons of her major’s classes reflected in course work for other departments, she said.

“A lot of other subjects tie in with (religious studies),” Benson said, “I noticed it especially when I took British literature.”

Additionally, Benson found that familiarizing herself with a diversity of religions made her more comfortable around them and more open to trying new things, she said.

“I took Hinduism last semester and ended up deciding to go to India for Winter Term,” Benson said. “I don’t think I would have gone or been as open to learning new things, if I hadn’t taken a class that made me familiar with their traditions.”

Examining views in our community

Even with members of Elon’s faculty encouraging religious diversity, a recent study indicates that there is still more that must be done to transform the campus into an inclusive environment.

Last fall, Elon partnered with the Interfaith Youth Core to conduct an assessment of the campus’ climate for religious and spiritual diversity with a grant from the Teagle Foundation.

The survey asked students to describe the extent to which they feel it is both important and possible to recognize, embrace and learn from religious views that are different from their own.

Elon students who identify within religious minorities are more prone to have a pluralistic worldview than those in the majority, according to a report on the study’s findings.

The study also found that students who identified with the religious majority are 23.6 percent more likely to feel as if Elon University provides a “safe space” to practice their religion.

Students that do not align with any religious beliefs were substantially less likely to feel support on campus compared to those students who identified as religious, according to the report.

Huber and Fuller both agreed a fear of conflict is one of the greatest barriers to creating an environment where everyone feels welcomed and supported.

“We need to be willing to say the wrong thing sometimes, and to let other people say the wrong thing,” Huber said. “If it’s done with good intentions, I think we can work on trying to hear what others have to say, and teaching one another to talk about our differences.”

The best way to deal with a fear of offending others is just to begin a respectful dialogue, according to Fuller.

“It’s my sense that if we stop being allergic to conflict and try it out, we could learn to do it in a very gracious and honorable way,” Fuller said. “Then we might not be so afraid of it.”