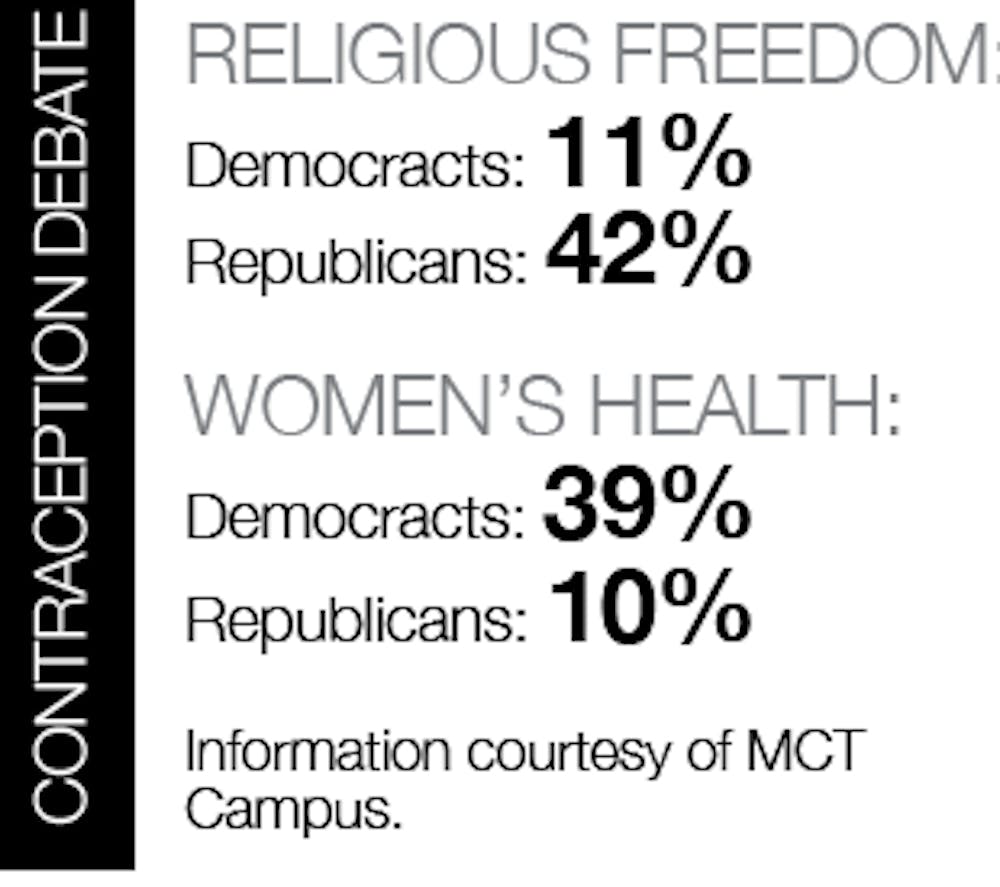 Across the nation and at Elon University, a dispute over church-affiliated organizations, hospitals and colleges having to cover birth control in their employees' health insurance plans has resulted in a debate that stems from two arguments: the lack of contraception availability for some women versus a violation of religious liberty for employers.

In light of the Obama administration’s federal requirement that employers include complete contraception coverage under all health insurance plans, conservatives and some religious organizations not exempt under the original rule — any that are not considered a church or house of worship — expressed disproval of the mandate. The Obama administration has announced an accommodation for these organizations, according to a news release from the U.S. Department of Health and Human Services.

“Most Catholics think (the accommodation) is a Band-Aid to the problem,” said Gerry Waterman, the university’s Catholic campus minister. “We feel as though it’s an infringement of religious liberty, and the rule is taking our rights away.”

The Obama administration said the accommodation would require insurance providers, not the religious organizations themselves, to offer women complete coverage of birth control.

But some conservatives still believe that the root of the issue — the government’s infringement on religious institutions’ right to refuse actions that contradict the Church’s teachings — is not being solved.

“This health care bill should be viewed as a serious threat to religious liberty,” said freshman Austin Faur. “Usually, people say churches are forcing their beliefs into government policy, but now, the government is attempting to force its policy into churches.  Right now, it may just be contraception, but this could set a precedent for future mandates that will allow the government to force religious institutions to do something more extreme.”

Leigh-Anne Royster, director of health services and health promotion, said though Elon students would not be affected by the measure concerning birth control purchases through the university’s health services, which doesn’t accept insurance as a form of payment, the availability of contraception to all women is something she supports.

“I don’t view it as a religious liberty question,” Royster said. “I view it as a preventative health care strategy.”

“If the government can legally mandate the activities of religious organizations, this violates the separation of church and state,” Maselli said. “But the way the law is worded now, any private employer can claim any vague religious reasons to skip out on providing female employees a more comprehensive, and thereby more expensive, health care plan.”

Religious organizations’ objective to not have contraception as an option under employer-associated health plans is a concern of senior Kelly Little, who said women who want to use birth control should easily be able to purchase it under their company’s insurance plans.

“It is important to respect people for their beliefs and allow them to express their opinions,” Little said. “However, I passionately believe that every woman should have access to birth control and the ability to choose for herself.  Choosing not to use birth control yourself because of religious beliefs is one thing, but inhibiting others from making their own choice about birth control is another.”

But Faur, who along with other Catholics is not completely confident in the Obama administration’s guarantee that religious organizations will be able to avoid even indirect funding of birth control, believes the universal contraception coverage rule has more implications than some realize.

“This would be extremely harmful to the United States, because many of the Catholic hospitals, universities and charities that take a burden off the government would no longer be operating,” he said. “Some of the best universities in the country would be forced to close or pay astronomical fines. Charities which would have no way of paying these fines would no longer be able to operate.”

Additionally, Faur said a major component of his and other Christians’ stance on the issue comes from the notion that birth control is not health care.

“Health care is something that prevents or treats some sort of ailment,” he said. “Birth control does neither. Birth control prevents pregnancy, which has never been considered a disease. In fact, pregnancy is the opposite of disease — it is the earliest stage of new life.”

Royster said the dilemma between private institutions and the government’s funding of conscience-violating programs is one that may have no easy fix.

“The whole separation of church and state in our culture is hard,” she said. “We do have nationally funded programs and you just can’t get away from the fact that things are probably against some people’s ideals. If we really look down at funding related to ideology, there’s no way to protect or guard against that in a blanket sort of fashion.”