The Endemic of Apathy 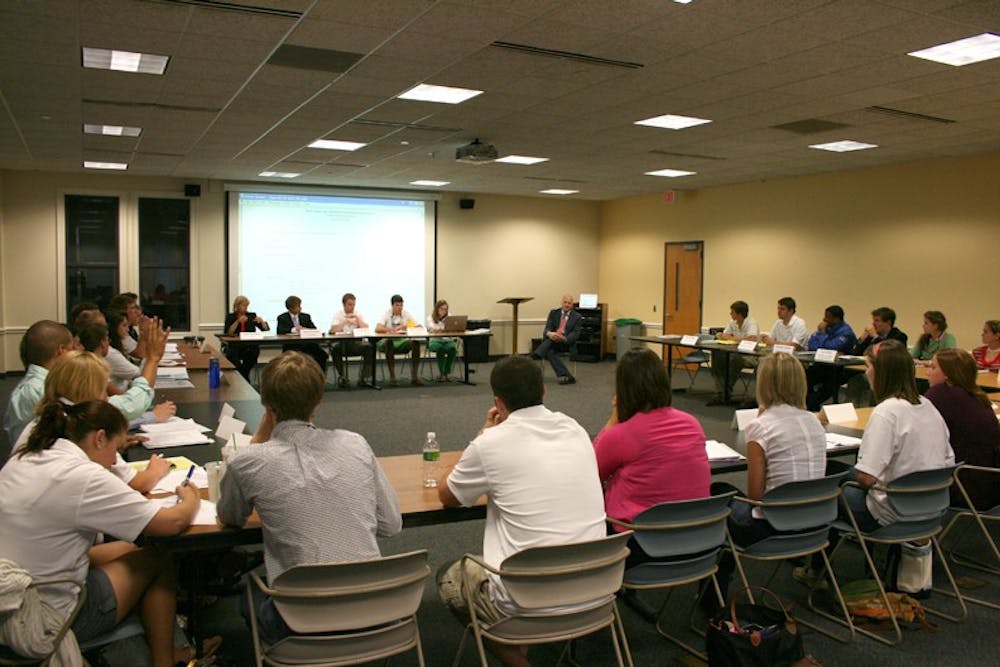 Senior guard Drew Spradlin scored nine points in the 82-67 loss to North Carolina State University. Photo by Al Drago.
Transparency was the buzzword at last week’s Student Government Association debate and in candidate speeches for the upcoming election. Students proposed more frequent video updates, student media liaisons and an open-door policy in the SGA office.
It’s no secret that many Elon students are clueless about the recent efforts of SGA, and even more painfully unaware of the financial and legislative authority they hold. It’s been a hallmark of many candidates’ campaigns to point out this shortcoming, and they promise they will do everything in their power to counteract it.

But what is the point of offering more access to students when they aren’t taking advantage of the openness that currently exists? As much as SGA should continue to make strides in their transparency as an organization, it’s time they expect the Elon student body to meet them halfway and exhibit genuine interest in the decisions and actions of their governing body.

To be ignorant is unfavorable. But to know better and not to act? That’s simply inexcusable.

SGA’s Thursday night meetings are open to anyone on campus at 7:30 p.m. in Moseley 215. They operate Twitter and Facebook pages. They have records available for view in their student-run office. Sure, there are improvements that can be made, but why is there not more significant student interest in the issues they are discussing and voting on?

It’s easy to complain and sit idle with bitterness and blame as your only companions. It’s even easier to pretend like you don’t care.

What takes courage and demands admiration is action. It could be an action as simple as casting an online ballot in the elections this week. Or as momentous as leading a movement demanding change.

[quote]SGA representatives elected this week, expect to be held to your promises of transparency. It’s only when the initiatives of the organization are paired with the action of the student body that your goals can be successful.[/quote]

In this week’s edition, you’ll read about junior Laura Sturm, who is single-handedly leading a fight for gender-neutral housing on Elon’s campus. She personally has no need for the housing option, but ask her why she does it and the passion behind her response is palpable.

“Even if we only have one gender-neutral housing situation a year, at least it’s available,” she said. “For those two people, it’s going to be such a big difference in their lives and have such a big effect on them. It’s not for everyone, but having the option can have such a difference in someone’s life and comfort in being at Elon.”

Last week, you read about junior Miles Grunvald and Ross Wade, assistant director of career services for the School of Communications, who are paving the way for causes they believe in–blood marrow drives and an outlet for the LGTBQ community, respectively.

We can’t all be Lauras. But as cheesy as it sounds, what we can be is ourselves — we know our personal interests, passions and desires for the Elon community and it’s such a shame to see them go to waste and allow apathy to win.

You may not be voting on a national legislative issue or electing the next president of the United States. But, students, at this point in your life, Elon is your community. Why would you sacrifice the opportunity to shape its future not only for the current community, but for those to come?

And to the SGA representatives elected this week, expect to be held to your promises of transparency. It’s only when the initiatives of the organization are paired with the action of the student body that your goals can be successful.

So don’t say you didn’t have time to vote. Your classmates know you spent the majority of your Tuesday class surfing Facebook and Pinterest. And don’t even bother pretending you didn’t know SGA elections were this week. You lost that excuse when you picked up this paper. Perhaps most importantly, you can no longer claim ignorance to the opportunities SGA provides for student involvement.

Understand the issues, know the candidates’ platforms and don’t vote for someone because they’re in your roommate’s fraternity or have a creative campaign gimmick.

You say that Elon is where you bELONg? It’s time to act like it — and earn it.