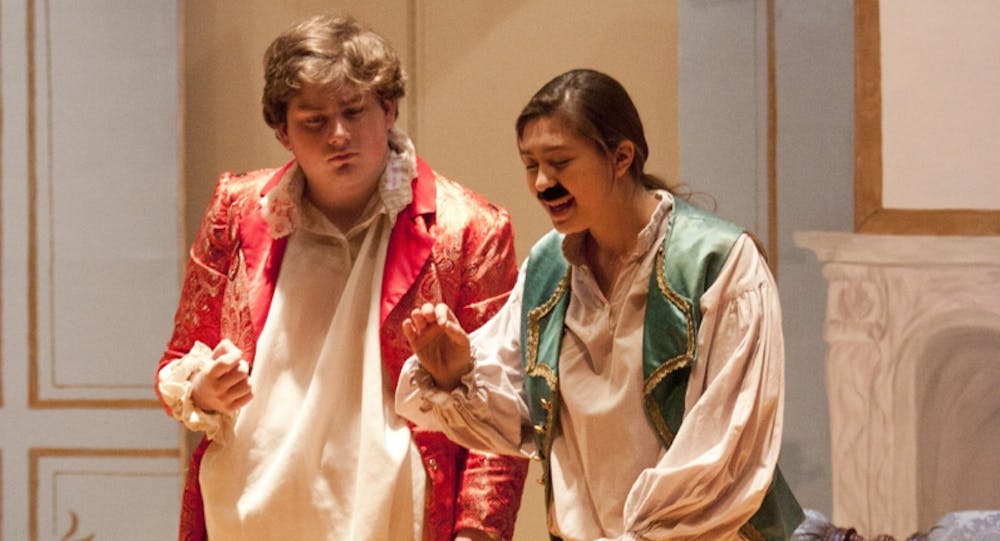 After an in-depth analysis and reading of “Le Bourgeois Gentilhomme,” students in the Winter Term course French Theatre in Production performed the play Feb. 4.

The play, written in the late 17th century by French playwright Moliere, is a comedy that satirizes French social classes. It focuses on a bourgeois man and his attempts to rise above the middle class to become an aristocrat.

His comical efforts to imitate the higher class lifestyle made for an ultimately crowd-pleasing play, despite the language difference.

A screen was positioned above the stage with modern English subtitles, so non-French speakers could understand the dialogue. The screen didn’t distract audience members and was an essential tool for those who didn’t speak the language.

For many students, this course provided the chance to revisit the stage.

“As a biology major, I haven’t really had the chance to perform in any shows,” said junior Sarah Hoopes. “It’s been nice to have a break and do something that I miss.”

Freshman Caleigh Erickson also did theatre in high school, but hadn’t continued with it since graduating. She said she was thrilled to have found a course at Elon that was both new and exciting, but also academically challenging.

Olivia Choplin, assistant professor of French, proposed and designed the entire course. She received a teaching and learning grant to pay for the production.

Choplin said most of the 17 students in the course were freshmen.

“Madame Choplin had told one of my classes that she was interested in starting this class and asked for students who were interested a year or so ago,” Hoopes said. “I was so excited when I heard it was happening.”

During Winter Term, class differed every day. Some days were spent in the classroom, learning the history of the play, discussing French society and culture or learning more about each character. After the group had developed a strong grasp of the play, they moved to the stage.

“We all grew really close through this project and we worked really hard to put it all together, despite a few setbacks,” Erickson said.

Choplin said she was impressed with how the performance went, as the students only had three and a half weeks to prepare an entire play in a foreign language.

The musicians’, actors’  and singers’ hard work allowed for impeccable memorization and enthusiasm on stage.

“My in-laws, who are French, came to the play and were astonished at how well a group of American students could present a French play with less than a month of preparation,” Choplin said.

Hoopes said she enjoyed the pace of the class and getting to know the cast members.

“I think it’s a really fun way to learn a language,” she said.

Choplin said she hopes to continue offering the course in future semesters. She plans to expand the international cultural climate on Elon’s campus and eventually have every seat filled in the theater on opening night.