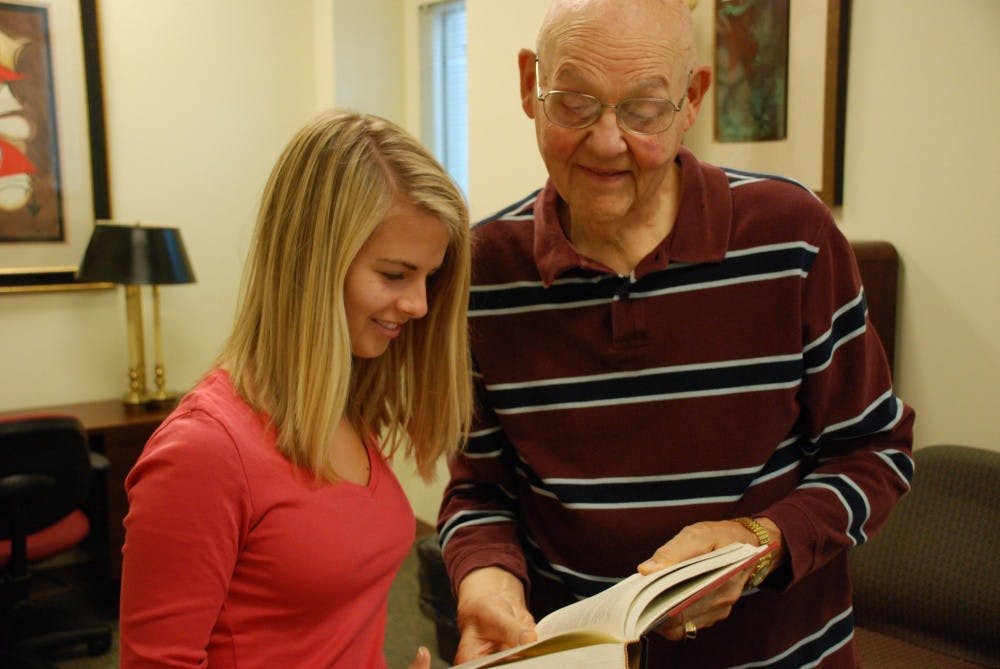 President emeritus Earl Danieley saw his current Elon 101 T.A. grow up through photography. Each December, he reached into his mailbox and pulled out a Christmas card from Kelly Harris, one of his former students, containing photos of his two children Jessica and Wade Harris.

"Dr. Kelly Harris always sent me pictures of Jessica and Wade and told me about how his children were doing as they were growing up," Danieley said. "He also told me when she first decided she was coming to Elon."

Jessica visited Elon a few times before deciding to attend the school. She first met Danieley during the dedication of McMichael Science Building in 1998.

"I had heard about Danieley a lot growing up," Jessica said. "My dad basically considers him his second dad. He taught him more than just chemistry. But I don't think I got to put a face to the name until I was seven years old."

A couple years later, when Jessica was trying to decide between Elon and University of North Carolina at Chapel Hill, she met with Danieley for a meal in 1889 Grill Room.

"He was able to tell me the whole history of Elon," Jessica said. "He introduced me to faculty and students, but it was just so obvious that he really loved Elon."

She did not make her decision until May, at the very last moment. Soon after she received her schedule, and found out she was in Danieley's Elon 101 class.

Kelly was correct. Danieley had indeed requested for Jessica to be in his class once he learned that she was enrolling at Elon. He also welcomed her to the campus as soon as she arrived.

When Jessica arrived at her dorm and started unpacking, Danieley was waiting for the Harris family at one of the registration tables by her dormitory. Later that afternoon, he saw the Harris' again, when he met all of the parents and students in his Elon 101.

"Teaching Elon 101 almost always leads to meaningful relationships," Danieley said. "Not only do I get to know the students but I also get to know the families of the students. When the students in my Elon 101 tell me that they are involved in an organization, I make sure to go see them. Most recently, baseball is now on my ticket too."

After Jessica's Elon 101 class ended, she wrote Danieley a note asking how to apply to be an Elon 101 T.A.

"I opened the letter and chuckled to myself. Then I responded that she just had applied and that she got the job," Danieley said.

Each section of the class is taught differently  because of the many professors who teach Elon 101. There are some unique attributes to Danieley's version of the class. He takes the students on a tour of campus, where he includes all of Elon's history. He also invited his class to his home for hotdogs and the last class is held during brunch at Colonnades to talk about what should be added to the syllabus next year.

"Having Jessica as my T.A. has been a joy. She is this wonderful girl who I have gotten to see grow up, and it's great that our relationship really got to go full circle," Danieley said. "I enjoy learning about my students. Especially now that Verona is gone, they are the people who help me fill my life with love and joy."