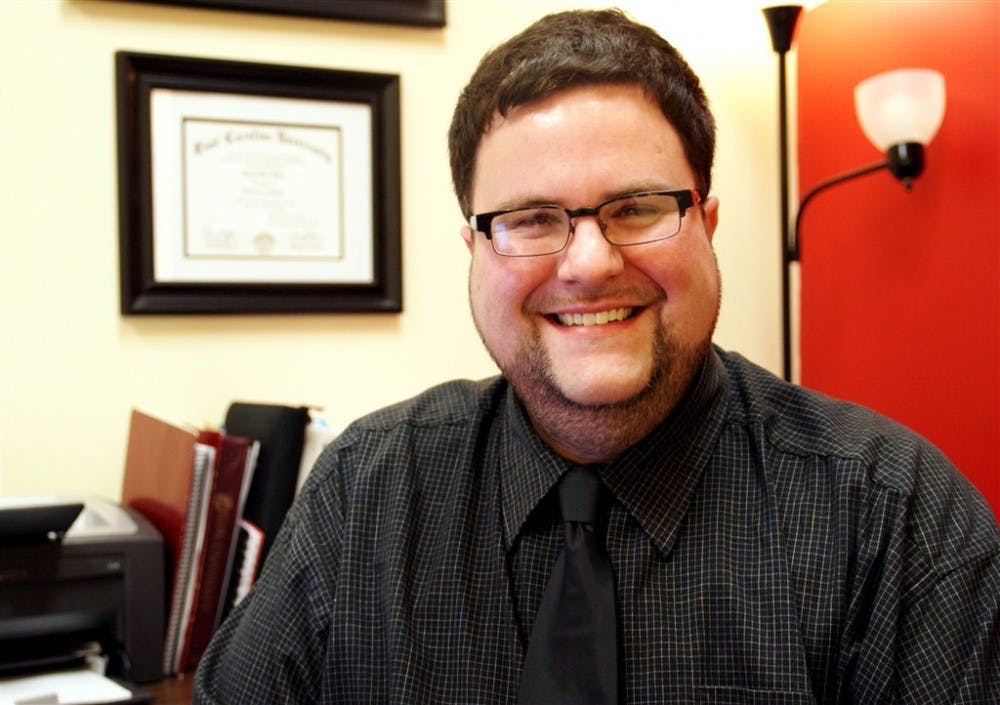 When Ross Wade first heard the explosion on Sept. 11, he didn't even flinch. Until that moment it had been a normal day. Then he reached street level from the subway, and everything changed.

"It was an area where they were always working on film productions, so no one one felt out of the ordinary or even flinched at the noise," Wade said. "When I left the subway station, everyone was facing one direction. Their faces are what scared me. It was weird how their faces looked. They weren't scared or entertained, but just confused."

Then, Wade watched as the plane hit the second tower.

He headed toward his boss' home, his original destination, because her daughter went to school right across the street from the World Trade Center. When he reached her apartment, a cleaning lady let him inside.

"I was told my boss had already left to get her daughter because things and people were falling out of the towers," Wade said. "She had this huge window that basically framed the towers. I would look out the window and then have to turn to the TV because I could comprehend it better from the TV screen."

He turned to look out the window, and the first tower fell to the ground. He left the apartment, went outside and entered the streets where masses of people were running.

His mom called from Durham. She was the first person to start to explain to Wade what was happening.

"She told me terrorists were attacking," Wade said. "I told her that I was fine but needed to run north. Everyone was running north."

When Wade hung up, several people came over to ask to use Wade's phone. They knew people in the towers. They needed to call their husbands, wives, children and friends. But his phone would not send any more calls. The networks were too full.

"No one knew what was going on — we were just all trying to escape it," Wade said. "Shop owners were passing out water bottles and masks. Everyone said more planes were coming."

He ran with the crowd to Williamsburg Bridge. When he got there, people were already crossing, but police soon came and told them to stop because there might be bombs on the bridge.

"It seemed like there were thousands of people. All of us just trying to get out," Wade said. "So we all turned around and started running south to the Manhattan Bridge. Cars were zooming past us. It all had a very apocalyptic feeling."

He was allowed to cross the Manhattan Bridge. The second tower fell. He turned around to face the city.

"Black smoke was oozing out of the bottom of the island," Wade said. "The towers were gone. It was iconic, those structures, and now it was empty."

Wade walked back to his apartment in Brooklyn, N.Y. He had not been able to talk to anyone he lived with that day. All of his roommates were in his apartment waiting for him. One of them, Eric, had hopped on the back of a Meritas Bread truck in order to ride out of the city.

"When I walked in it was the happiest moment because we were all OK, but we were all crying," Wade said. "It was a surreal feeling."

Wade stayed home for a couple of days after the attacks. He lived in an apartment without central air conditioning. In September, that meant the windows were left open. Smoke from where the towers used to stand kept blowing into his apartment. He went home not just to clear his head, but also to clear his lungs.

"It wasn't New York City after the attacks," Wade said. "When I returned two days later, everything was so quiet. All of Union Square smelled like lavender and vanilla. Parts of New York were more like candle stores than subway stations because of all of the memorials. And the faces of those who died were everywhere, all around you."

Fliers lined the walls of subways and buildings with the faces of family members who had not returned home after the attacks on Sept. 11.

"Employers would stop and look at the fliers," Wade said. "They would look and see if the employees they had not seen had not returned home. If they were on the flier, they were probably dead."

Wade had been in New York City as a production assistant, but productions stopped after the attacks.

"It wasn't just people who were mourning, but the whole city," Wade said. "I ended up basically losing my job because of it. Lots of people were suddenly out of jobs. People weren't eating out as much, so waiters no longer got paid. Everyone was just aware that it no longer felt like New York City."

For about three months, people were nicer in New York City, but then they got angry again, Wade said.

"It made me angry to hear people outside of the city talking about it," Wade said. "Ground zero became a tourist attraction. It made me mad when people tapped me on the shoulder in 'I heart NYC' shirts with a camera around their neck and asked for directions to ground zero."

Wade tried to not talk about that day too much.

"That day was like being cast as an extra in a war movie and you didn't know it. It was like a war movie with no producers or directors. Just chaos," Wade said.

The roof of his apartment, where he used to relax, now looked out onto a city that no longer had the iconic towers. For two or three weeks after the attacks, the smoke made it impossible to sit on the top of the apartment building.

"Some of the magic of the city just seemed to be gone," Wade said. "The summer after the attacks, I returned home."

Wade had moved to New York City to sublet for a friend just three months before the attacks on Sept. 11. He had been on location in Rhode Island for two of those three months.

He had already decided he was going to return to North Carolina before the attacks. It was where his friends were, he said. He already knew he would not want the late nights and deadlines of the film industry forever, and after the attacks, he started looking up counseling jobs.

Wade became the assistant director of Career Services for the School of Communications in 2005.

"I thought I could be doing something different where I could be helping people, not just showing people something," Wade said. "I wanted to help people. It's been 10 years since Sept. 11 and I am not really sure how it has affected me. But I hope that I have helped people. I hope I have made a difference since then"