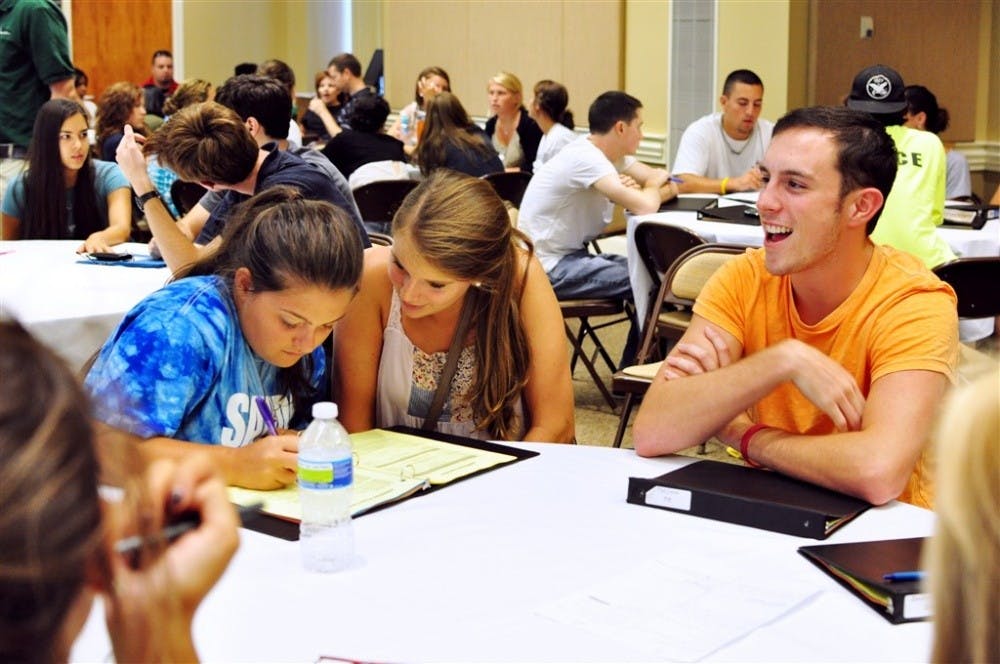 The incoming freshman class and their parents get a chance to see one of the traditions that makes Elon University unique—when upperclassmen involved with the New Student Orientation program help carry students' belongings into their dorms.

These upperclassmen start arriving to campus as early as August 12 to prepare for freshman orientation week.

"The training week is so important for Orientation Leaders because it provides them with the tools they need to facilitate their sessions with new students," said Lauren King, head team captain of New Student Orientation.

All of these students are led by Katie Hight, director of new student programs, who began the position this fall.

"Orientation week is really important for the incoming students because it allows them to learn about Elon, get connected with the university and their peers and really become part of the community," Hight said.

As director, Hight is responsible for helping to hire, recruit and train student leaders, manage the program's budget, coordinate evaluations, organize entertainment groups and schedules and be a point person for the students involved with the New Student Orientation program.

Even though Hight is new to her position, she is not new to Elon's orientation program: she graduated from Elon University in 2007 after serving as an OL and a member of Head Staff.

"I have gotten to experience Elon's orientation program in many ways now," Hight said. "I have gone full circle but I really love this program "

Sixteen students with positions on Head Staff returned to Elon's campus Aug. 12. Head Staff are the student leaders who help train the other OLs.

All Head Staff members previously served as OLs and applied to be on Head Staff last fall.

"I decided to apply for Head Staff 2010 because I truly fell in love with Orientation in 2009," King said. "My freshman year I was very shy and quiet. After being an Orientation Leader, I realized that it was okay to be my goofy self and found comfort in a group of dynamic students who I could tell had an unbreakable bond."

Orientation sessions are used to introduce students to Elon's honor code, the basics of academics, the career center, tutoring services, Elon's judicial system and the campus.

"One change to the nightly programs is that the Phoenix Extravaganza is taking place in the stadium," Hight said. "Students will attend the soccer game that night and during half time there will be a pep rally where students get to try food from local vendors."

OLs moved back to campus August 20 to start training. Students interested in becoming an OLs fill out an application and are interviewed by members of Head Staff before being selected in February. They start training in March and return to campus early for the last few days of training.

During training sessions in the spring and fall, King says OLs are given as much up-to-date information about Elon as possible, are addressed by administrators from different departments and also spend time building team unity.

"The week of training builds camaraderie, leadership and team work," Hight said. "We take it very seriously—it's a vital piece of Elon culture"