Jan. 18, 2023 marks the 100th anniversary of the fire that destroyed most of Elon’s main campus 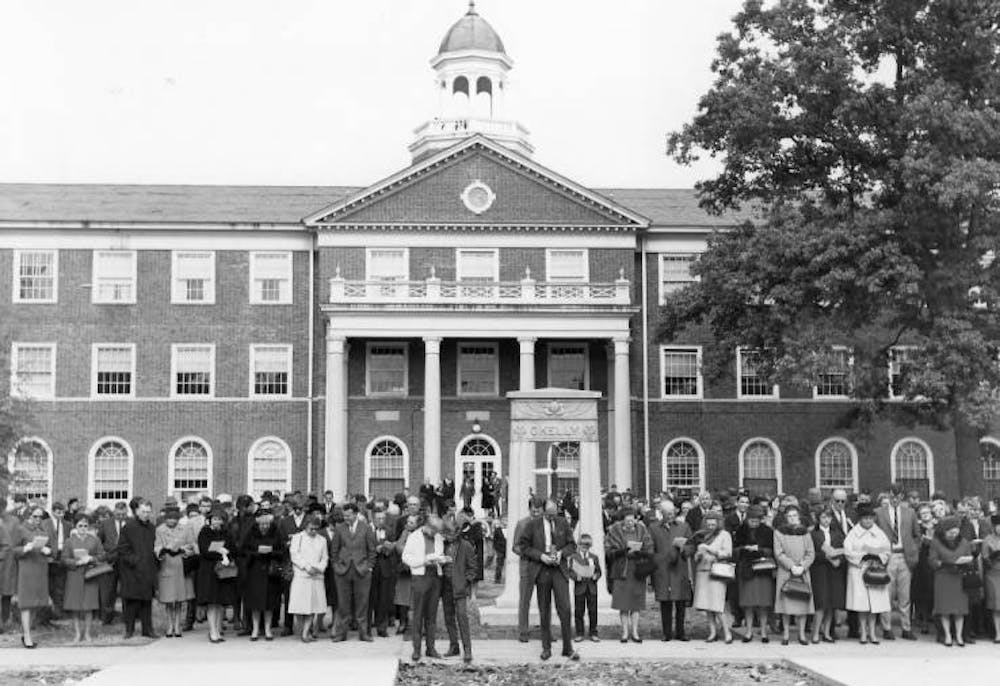 The Alamance Building was constructed after the 1923 fire which burned down the Old Main building. After the fire, multiple campaigns began to help rebuild and also establish a university endowment fund. The building opened in 1923 but wasn't formally presented until 1924. Photo courtesy of Elon University archives.

One hundred years ago, the Elon University community had no idea how fire would become so integrated into the campus community.

Beginning Jan. 18, Elon is beginning a year-long celebration commemorating the fire that destroyed most of the main campus. Senior Megan Curling serves on the 1923 Engagement Committee and has been working all year to plan large-scale events for Elon’s campus.

“It's a beast, but it's been really fun to see everyone from across campus,” Curling said. “We have representatives from university communications, archives, athletics — basically anywhere you can think of on campus coming together to come up with these events. We have a lot of meetings and a lot of subcommittees and all of the things you can imagine to plan over a dozen events throughout the year, kind of hallmarked by four pretty major events that are in each of the quarters.”

Curling said the events are all about commemorating the fire, not celebrating the fire. She said she’s learned a lot about how innovation has tied into the last 100 years of Elon’s history.

“It's been a lot of learning about the history of Elon and understanding how the community has supported us and how we've really grown into this really large university from what started as a tiny college,” Curling said. “It's been really neat and I'm really excited that we get to share all of the events and all this knowledge that we've kind of compiled with the university community this year.”

Curling said as the committee continues to meet and plan such a historic event, the goal is to make sure the greater community is involved as well.

“One of the most important focuses that we've had as a committee is making sure that the celebration is not only for our campus community, but for Alamance as a whole,” Curling said. “In our first committee meeting in October, we talked about how when there was a fire, there were so many people from the greater community who came and helped rebuild. We've really held that to a core tenet of making sure that the greater community is involved because it's just as much a celebration of how we've worked together rather than just the campus and so I think that that's been a really important part.”

According to university archives, William B. Terrell, an on-campus power plant worker and sophomore of the college, first noticed the fire and tried to ring the bell in the Old Main Administration Building, but when that didn’t work, he ended up shouting “fire” as he ran by all of the dormitories instead. He called the Gibsonville and Burlington fire departments who arrived minutes later. Students assisted with a bucket brigade, but it was too late. Flames overtook the building and destroyed student and alumni records, the president’s safe and nearly all the college’s library books. An edition of the Maroon and Gold student newspaper that next morning called “the greatest catastrophe in the history of Elon College.”

The fire caused an estimated $125,000 to $150,000 in damage. It also sparked a second fire that occured between the tin roof and the ceiling of the nearby Alumni Building. That fire was contained, but Terrell and others received minor injuries during their attempts to put it out.

Later that morning, Elon’s fourth President William Harper met with faculty to begin repairs. Harper also hosted an assembly in the Alumni Building gymnasium for students, faculty and town residents. Classes resumed just one day after the fire. For the rest of the semester, classes were held in the men’s and women’s gyms, dormitories, lodges, the post office and in faculty members’ homes. The administrative offices of the president and dean were moved to the East Dormitory.

But, that was only a temporary move. Just days after the fire, the Board of Trustees met to find a more permanent path forward and voted to rebuild the campus by creating the Emergency Fund committee with a goal of raising $600,000 – half for construction and half for the school’s permanent endowment. The first new building would be a three-story, fireproof administration building, named Alamance Building after the residents of Alamance County that donated $100,000 for the university to rebuild.

Over the next two years, four other new buildings were raised: Whitley, Carlton, Mooney and Duke that now make up the academic buildings in the Historic Neighborhood. The fire also led to the rebirth and the adoption of Elon’s new mascot, the Phoenix, in 2001.

The committee’s commemoration of the fire will include events like a special College Coffee on Jan. 31, a gala and a celebratory breakfast on the morning of Jan. 18 that will honor members of the Elon community and first responders.