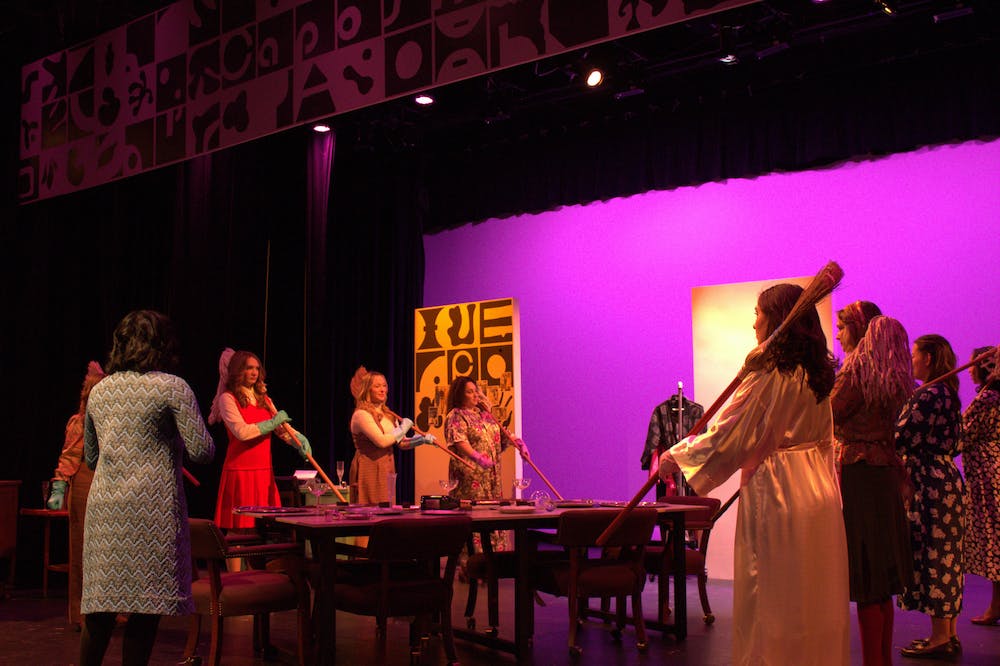 
Students in Elon University's department of performing arts rehearse lines and cues during a Jan. 18 dress rehearsal for “The Inferior Sex," a play by Jacqueline E. Lawton.

Jan. 20 marks the debut of the play “The Inferior Sex,” written by Jacqueline E. Lawton, associate professor in the Department of Dramatic Art at the University of North Carolina at Chapel Hill. The political comedy will be directed by professor of the performing arts Sarah Hankins and initiated by Elon’s Department of Performing Arts.

“The Inferior Sex” is based on a fictional female-run magazine, “Caposhi Rev,” from the 1970s, holding commentary on the political and racial environment of the time and the challenges to feminism in society. The performance aims to explore the identities of the characters and the shifting beliefs of the time while paralleling modern-day struggles of women.

Senior Carenna Slotkoff plays Penny in the show – the only childbearing character – and enjoys the powerful personalities in the play.

“I think that all the characters are lovely in the way they were written because they all have a reason and a background for what they believe in,” Slotkoff said.

Junior Jasmine Smith plays Gwen Hudson, the new political writer coming to the Manhattan magazine and the only Black woman to write there.

“There are three Black women on the show, and I feel like we all represent different Black women of that time,” Smith said. “Gwen as a character is still putting her foot down and still making way for herself in the world –  a white woman's world.”

Smith said she feels the play will relate to Elon students by spotlighting how many women’s issues carry on into the modern day.

“What we realized as a group is that we all want to do work that matters to us, but at the same time, answer to the people in charge of us,” Smith said. “The issues we speak on in the play are related to the things that women nowadays are combating, even though the play is dated in the ’ 70s.”

Smith said that having an all-female crew and cast has “felt so rewarding” and hopes the production can inspire women to fight for their spot in society and stay firm to their beliefs.

“I'm just excited to bring a piece of art to life with people that I seriously adore and to celebrate womanhood and also how far we've come but how far we know we have to go,” Slotkoff said.

The actors are set to perform in Robert Studio Theater in Arts West from Jan. 20 to 22 and Jan. 31 to Feb. 4., with 2 p.m. and 7:30 p.m.performances. “The Inferior Sex” includes discussions of sexism, sexual assault, sexual harassment, sexuality, racism and systemic racism, according to the department. Tickets are free for Elon students and $15 for the general public.