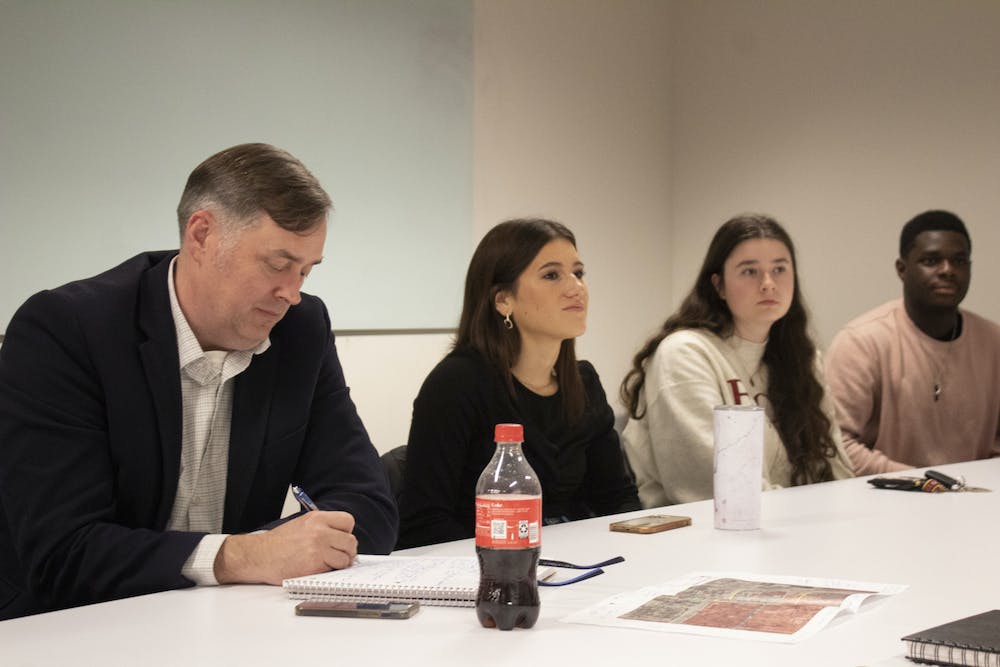 Updated as of Nov. 28 at 11:10 a.m. to include details about Elon University’s financial contributions to the town of Elon.

The town of Elon hired Benchmark Planning, a consulting firm based in Charlotte, to create a development plan for downtown. Members of the planning team Jason Epley and Dan Douglas are meeting with Elon University students, faculty and staff, as well as Elon locals and business owners, to figure out what would work best for the community.

Ten students showed up to a Nov. 14 student focus group in the Moseley Student Center, open to all Elon students, to answer Douglas’ and Epley’s questions on student needs downtown.

The biggest issues outlined by the students were the lack of sidewalks, late-night food options and emergency healthcare facilities.

Douglas and Epley asked multiple times about the live music scene in Elon, including band and a cappella performances at The Oak House, under the temporary tent downtown and in local bars.

Douglas said that while students have great plans, the town simply does not have the funding to create these opportunities.

“They don't have a lot of money — you should know because the biggest business in town doesn't give them any money and that's this,” Douglas said, referring to the university. “They don't pay taxes to Elon. … I think you probably recognize that something good happens, it's usually a partnership with the university because neither one really can afford to do it alone.”

As a non-profit, Elon University does not pay property taxes, but because it uses the town’s public services, it donates money to the fire and police departments as well as the town’s general fund. According to the town’s budget ordinance for the 2022-23 fiscal year, the university contributed $316,586, not including the property tax the university pays for The Inn at Elon and other properties not used for education purposes.

Another issue in bringing in new stores or restaurants is the lack of staff and patrons. While students suggested stores such as Trader Joes or food halls, Douglas said Elon does not have enough patrons during the academic year, but especially not during the summer.

“It's tough to figure out how to make some of these things. If there was a grocery store serving students, what would they do in July when nobody's here?” Douglas said. “They would close or lay off everybody because they wouldn't be able to make any money, so that makes it even tougher.”

Douglas said building sidewalks is a priority, and he and Epley are going to brainstorm a space that appeals to students and locals with food, drink and entertainment.

Douglas said they want to garner more student opinions and are planning on sending a survey and hosting another focus group in the near future. They also plan on having a public meeting for residents and students after Winter Break where they will also ask for opinions to develop a clearer plan.

Based on the feedback they receive, they will submit a preferred plan to the town, which will then prepare the budget for the next year.