City of Burlington preserves past through carousel reconstruction

The City Park landmark is set to reopen by Dec. 22 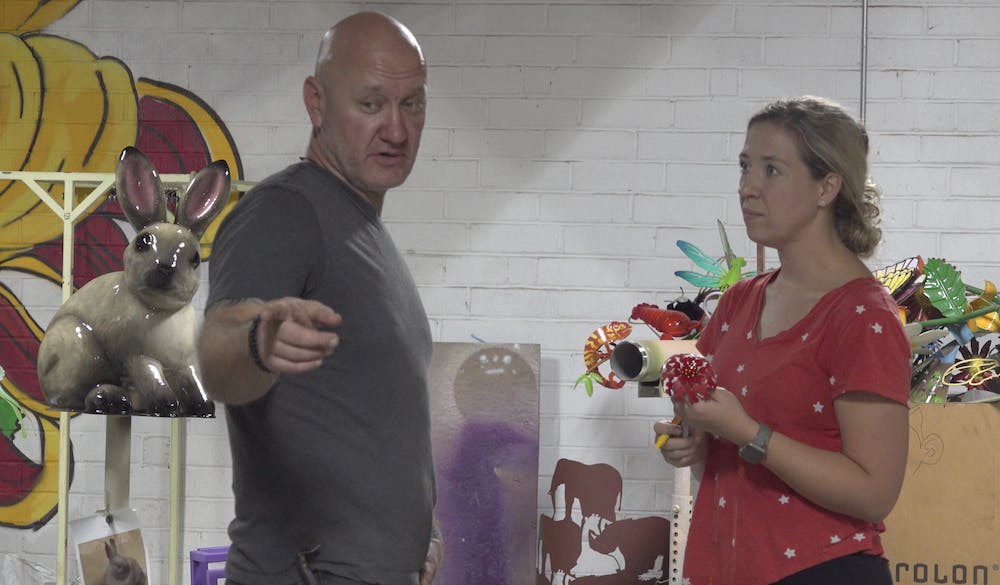 Photo by Ellis Chandler | Elon News Network
Casey Lewis and his team have been working on the carousel house for the last year. The custom metalworks company frequently works with the city of Burlington.

After over three years of restoration and reconstruction, the carousel house in Burlington is nearing completion. The final steps of the construction process are underway this month as the city’s Recreation and Parks Department prepares for the holiday season, but one of the biggest milestones was recently completed — reinstalling all of the carousel’s animals.

The 112-year-old carousel, located at the City Park,  was last restored in the 1980s, and the new structure costs almost $3 million. City of Burlington Director of Recreation and Parks Tony Laws said the biggest challenge of the restoration has been supply chain struggles. Laws said the issue was finishing the building, not finishing the animals, and the timeline is about one year and three months behind schedule.

“I get questioned every day about when the carousel is going to be up and when it's going to be back, and so forth,” Laws said. “There’s been a lot of excitement locally. I’m helping to get the word out and people are excited.”

“It's looking beautiful,” Laws said. “It looks brand new, even though it's over 100 years old, and it's been restored perfectly. We're really excited about having it back.”

The animals were restored by Carousels and Carvings, a manufacturer based in Marion, Ohio, that specializes in working with entire carousels. The carousel features horses, cats, pigs, rabbits, lions, tigers and ostriches. Some of the animals move up and down while others are stationary.

There is also an Americans with Disabilities Act-approved bench and ramp so that handicapped users can ride the carousel. Laws said some of the new additions were made so that all who want to ride can.

The animals and bench are positioned inside of the carousel house, which is glass-enclosed so that people driving by can see what’s inside. There are doors around the carousel that can be opened or closed to allow for year-round use, but the hours of operation have not been determined. Laws said it will be open on the weekends, and the city wants to keep it open some afternoons for people to come enjoy after schools let out.

There’s also sculptures modeled after the animals that will be installed outside with the railings along the path leading into the carousel house. Those were designed and made by Casey Lewis, owner of custom fabrication shop Beechwood Metalworks in Burlington. Lewis has lived in the area his entire life and completed various other projects for the city over the years, but he has been working on the carousel for the last year.

Lewis said he worked off of pictures of the restored animals and said he enjoys the design process for these kinds of projects.

“We sort of stylized what they were and hopefully made them a little more modern and interesting, just to  keep up with the new house and things like that,” Lewis said.

Every harness, hoof and hair on each animal required a special eye for detail. Lewis said he and his team drew each individual element and broke them down into tasks, such as determining the color palette and proportions.

Lewis said his least favorite part is the installation process, but watching the reactions to his work from members of the community still gets him every time.

“It's a fun feeling. I used to joke about it to my girls and say what we do is just normal,” Lewis said. “I can see how, to me, this is all normal. This is what we do on a daily basis. For others, some people are really, really fascinated. It is fun to see people smile. That's part of why we do what we do is to have people enjoy interacting with things, and it's fun to see it when they don't know you're around.”

Laws said the carousel’s first big debut will be at Christmas in the Park on Dec. 22. The city and Recreation and Parks department is hoping to have a ribbon cutting for the carousel, and all rides will be free that day. The city is expected to provide a firmer opening date and further details before then, but the structure is still being inspected by the North Carolina Department of Labor as construction nears completion.