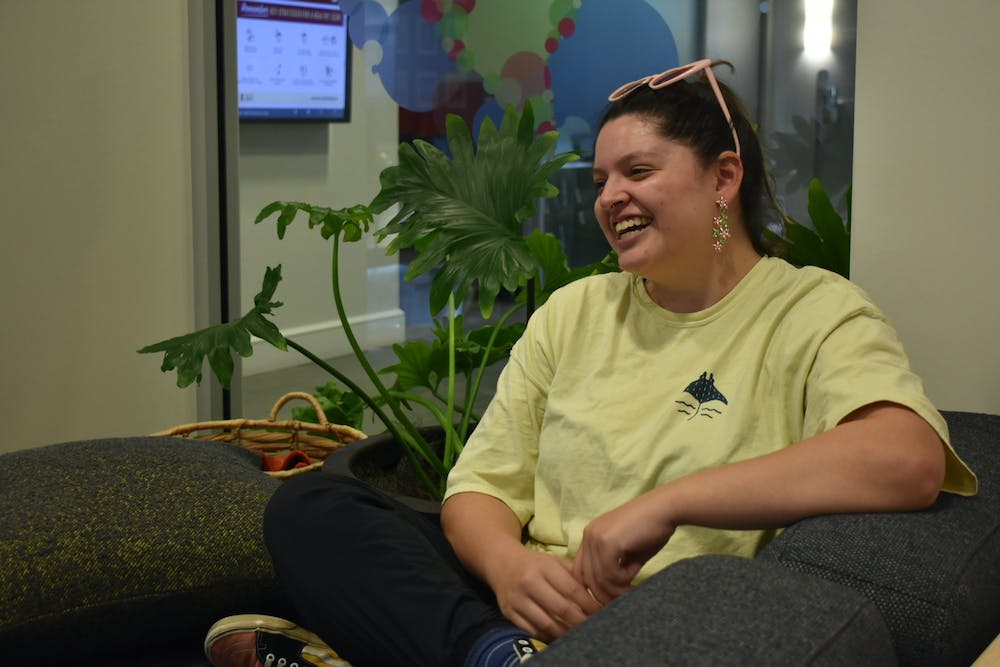 Manuela Cornick Fernández knew what she wanted to do for a living when she was 9 years old. Growing up in Costa Rica, she said musical theater wasn’t mainstream. But as her parents tucked her into bed the night after taking her to see her first musical, “Cats,” she announced her dream to be a performer.

Now a junior musical theatre major at Elon, Cornick Fernández doesn’t remember this encounter at all, though her parents have relayed the story to her, and she can still see the colorful characters dancing across the stage.

Cornick Fernández’s parents enrolled her in camps and classes, supporting her unconventional goals. Traditional dance was a huge part of Costa Rican culture, but Cornick Fernández was more interested in perfecting her skills as a modern dancer. So while her cousins were taking merengue classes at their grandmother’s pool house, she was learning hip hop and jazz. Looking back, she wishes she had taken more time to appreciate her heritage.

“I ignored folklore dance forever,” Cornick Fernández said. “It was just always there. Now I just know what it looks like. I wish I learned more about its origins or how it came to be. I wish I could salsa properly.”

Being in the U.S., Cornick Fernández said she misses dancing in a social setting. In Costa Rica, the activity brings people together. Whether it be in the kitchen preparing dinner or out with friends, each song and movement has purpose and history, she said, compared to the aimless “bouncing and bumping” in the U.S.

Freshman Carlos Rafael Levy Lañado said he has recognized this discrepancy, despite moving from Mexico City, Mexico, to Miami, Florida, at 12 years old. Living in a predominantly Hispanic community, Levy said he never experienced any culture shock prior to coming to Elon to pursue soccer.

“I was always in the classes for foreign students,” Levy said. “But I never even really had to speak English until coming to Elon because everyone spoke Spanish.”

Levy shortened his name upon coming to America to better fit in and prevent pressure on peers and professors. But he said announcers at Elon soccer games still mispronounce the names of foreign players.

“Sometimes they just give up,” Levy said. “It can be pretty frustrating, especially when the pronunciation is spelled out.”

Being away from home, Levy keeps in touch with his culture through not only soccer, but also music, exposing his friends and teammates to the songs and dances that were the background of his childhood. He said he aims to bring his identity to campus and share it with his peers.

“I play Mexican music a lot in the locker room,” said Levy. “I love to show my friends, ‘Hey, this is how you salsa.’”

Levy’s passion was ingrained in him since he was 2 years old through his culture. He grew up watching and playing soccer with his father and brothers, going to his first game at 6.

“When I entered the stadium for the first time, I cried,” Levy said. “As a young child, it was overwhelming. These were my heroes. I grew up watching them, and I wanted to be just like these players.”

Levy and Cornick Fernández both knew they would have to leave home to pursue their passions, and upon being introduced to Elon, they knew they could not let the opportunity escape them. Cornick Fernández said her determination and perfectionism is a product of her background and struggle to get to the university. Oftentimes in classes, she said she observes a sense of unimportance and entitlement around education, which can be frustrating to witness.

“It’s a privilege to be here,” Cornick Fernández said. “It makes me wonder — could I have coasted my way to get here? Probably not. Because I’m not from America.”

Being an international student brings many hurdles, according to Cornick Fernández and Levy. Cornick Fernández is faced with extra financial hurdles, unable to apply for financial aid or scholarships reserved for domestic students. The cultural divide exists among her and students from the U.S. as well.

“I had to quarantine for a week because I was coming from another country,” Cornick Fernández said. “I just felt very alone for a long time. I missed that first week of meeting people and getting to know my professors. It was hard.”

Coming in as an athlete, Levy was fortunate to have “built-in” friendships through his teammates. He said he especially formed bonds with fellow players coming from abroad, who helped him navigate the transition to Elon.

Senior Julie Ball experienced a similar advantage as a tennis player. Ball moved to Barcelona, Spain, at 12 years old to advance in the sport after moving around most of her childhood. Despite being raised by an Asian mother and English father, she identifies with Spanish culture.

Ball transferred from the University of Tennessee to Elon her junior year, searching for a place that felt more like home.

“Elon celebrates our cultures and encourages us to embrace who we are and where we come from,” said Ball. “That was something that was lacking at my other school. Here there’s El Centro, the Asian Pan Pacific club – they find ways to honor everyone’s identity.”

Ball said she has struggled with finding a place that felt like “home,” having moved around a lot as a child, living 12 countries around the world. Moving to Spain, she found a connection to the country through her sport — and tapas.

“The food is what I miss the most,” Ball said. “It’s the experience of all coming together to prepare it, enjoy it. It’s a connection you can’t find anywhere else.”

Ball and Cornick Fernández both identified food as a major aspect of their cultures. Cornick Fernández’s favorite memories of her childhood consist of baking chocolate eggs with her family at Easter. The older cousins would then hide them for the younger ones to find climbing trees on their grandmother’s property.

“My life has always been very family-oriented,” Cornick Fernández said. “It’s difficult to be away from that, especially when there’s a disconnect between us and other students.”

To bridge the gap between the Latino community and Elon, Cornick Fernández is an active member and employee of El Centro, frequenting the organization’s events and encouraging other students to do the same. She invites her friends to social gatherings thrown by El Centro, but she feels as if there is an unintentional lack of effort across campus.

“I just wish people would take advantage of everything we do to incorporate them into our culture,” Cornick Fernández said. “You don’t have to be Hispanic to be a part of it. We just want to share who we are with everyone and create that positive connection here.”