After three days, Buddhist monk destroys his own creation in message of impermanence 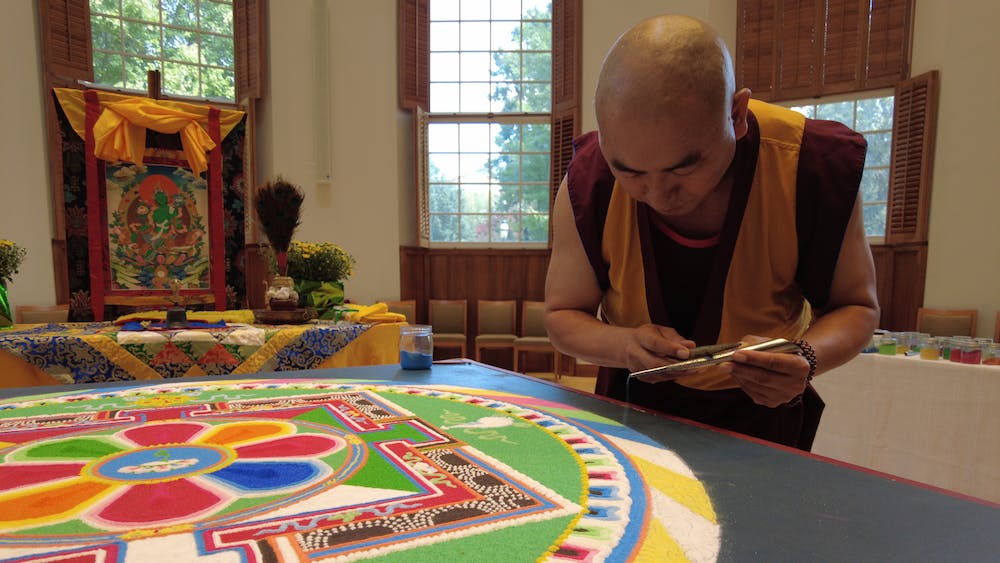 Throughout the three-day of construction of the mandala, Elon’s campus and local communities were invited to view the progress of Sangpo’s creation, which symbolizes happiness, peace and prosperity. When he finally finished on Sept. 16, Sangpo held a closing ceremony and destroyed the sand mandala.

According to Sandy Carlson, Chairman of the Board at the Kadampa Center. The slow act of gathering and then disrupting the sand — finely ground colored marble — symbolizes several Buddhist philosophies, including impermanence and the deconstruction of ego. With each mandala there is a specific outline, design and color palette that must be executed by the Geshe.

In the center the figure, Tara, a powerful female deity in Buddhism, is represented. Although the sand mandala is two-dimensional, Sangpo said “mandala is meditation,” and in creating the mandala, he enters a three-dimensional palace in which Tara is present.

This was Sanpo’s 10th year constructing a mandala on Elon’s campus. The Geshe teaches classes and provides ritual guidance at the Kadampa Center, but his journey began in eastern Tibet, where he was born and first decided to join the Monastery.

However, due to religious persecution and the destruction of many Buddhist Monasteries by Chinese authorities in the mid 20th century, Sangpo left Tibet at 12 years old. He crossed the Himalayas on foot to join the Sera Jey Mahayana Monastery in southern India. After years of studying, he graduated at 29 and became one of the youngest people ever to earn a Geshe degree.

Sangpo first visited Elon in 2003, while he was still living in Asia, and constructed a mandala with several other monks in Belk Library. He moved to Raleigh in 2008 and started visiting Elon more consistently in 2013 after the dedication of the Numen Lumen Sacred Space in the Truitt Center. He has returned each consecutive year except 2020.

University Chaplain Emeritus Richard McBride said he remembers when Sangpo and other monks visited in the early 2000s and is happy to see the Elon community become more open to the art form each year.

“I'm happy that the culture is much more open now. In the beginning the students were open, but now the whole culture is open,” McBride said.

After the mandala was destroyed, Sangpo chanted and completed traditional Tibetan Buddhist rituals, collected all the grains of sand and dispersed them to community members in attendance. A portion of the sand will also be taken to a body of water to be dispersed so it can spread throughout the community, flow to the ocean and share the blessings with the world according to Carlson.

Sangpo has completed almost 100 sand mandalas, but recently, he has been too busy to complete more than one a year. He said he prioritizes Elon because of the great community and the relationship he has built with the Truitt Center. Sangpo said hereceives many requests from other organizations and universities, but due to other commitments, is unable to honor them.

Elise Streval, outreach director at the Kadampa Center, travels with Sangpo every year, coordinating the event and helping inform students about the rare and sacred art. Streval said Elon is fortunate to witness the mandalas' creation.

“He's the only one in North Carolina, one of only a handful of people in the United States, and very few in the entire world who are qualified to do this,” Streval said. “The opportunity to see this is so incredibly rare. You know it. There are very few of these being made.”

Sangpo and Streval said they both hope to return next fall and create another mandala in the sacred space.