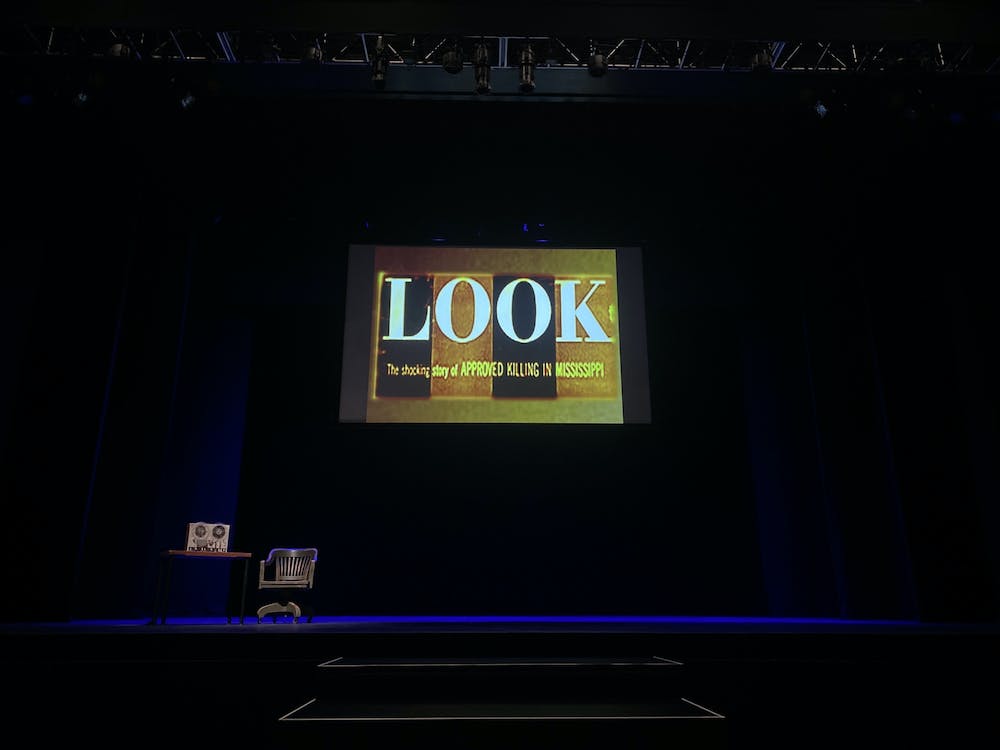 Photo by Claire Schoenfeld | Elon News Network
The opening scene for “Dar He: The Story of Emmett Till” performed at the McCrary Theatre Sept. 15.

Mike Wiley, the North Carolina-based actor and playwright of the one-man show “Dar He: The Story of Emmett Till,” said Till’s story — and the gruesome images of his open casket funeral — were catalysts for many famous civil rights activists of the late 1950s and early ’60s. The play recounts the true story of a 14-year-old Black child from Chicago who, on a trip through the Mississippi Delta in 1955, was abducted, tortured and lynched after allegedly whistling at a white woman.

“That open casket was the spark that inspired so many like Rosa Parks and John Lewis,  individuals that we know by name,” Wiley said. “But so many folks do not know the name of Emmett Till, so I wanted to showcase that.”

The actor, playwright, producer and director performed at Elon University’s McCrary Theatre Sept. 15. For the past 20 years, Wiley has performed and toured his own solo plays across the country. He said he creates plays based on undertold African American history not only for audiences to be exposed to the stories, but also so they can learn more about each other.

According to Wiley, the Kanye West song “Through The Wire” was the main inspiration for creating the show. West’s song, which he wrote after a car accident that fractured his jaw, contains a line referencing Till’s brutalized body.

“I decided to write this play so that young people who hear the song but have never learned the story know exactly who Emmett Till was,” Wiley said. “They also will, in seeing his play, realize that this was the spark that led the civil rights movement.”

Wiley wrote the show in 2005 and premiered it at Virginia State University in 2006. He said that he has performed the show close to 700 times, and even as more information about Till’s story has been released, he has minimally edited the script.

Tracy Francis, Wiley’s production manager, said that even after working with Wiley for 14 years and seeing the show multiple times, he still feels deeply moved by his performance.

“It still makes me emotional,” Francis said. “Especially as a father… when you see Emmett’s mother identify his body, you can’t even describe it.”

Freshmen Ella Hinds and Nate Krohmer watched Wiley’s performance together and both said that the show moved them to tears. Hinds said the show was especially impactful for her as a Black woman.

“It never got resolved really, and there was really never justice,” Hinds said. “It reminded me today how important it is that we do get justice.”

Krohmer said the play was his first experience of a one-man show and was incredibly impressed by Wiley’s ability to play a range of characters all by himself. He also said that he feels it is necessary to continue sharing stories like the one of Emmett Till.

“I think it's so important that we have to retell the story,”  Krohmer said. “I feel like stuff like this is still happening today.”