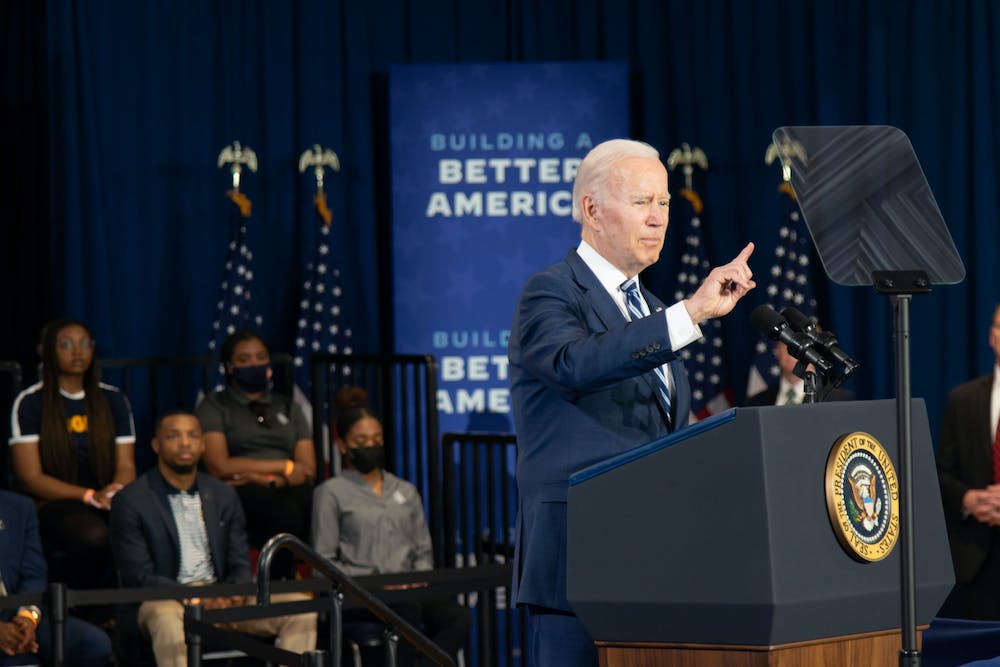 President Joe Biden signed a sweeping bill on Aug. 16 focused on counteracting climate change, as well as Medicare and health provisions and IRS resources, through the biggest investment in U.S. history. The $740 billion package consists of $80 billion to be pumped into the IRS and around $700 billion to be used for new spending and easing deficits.

Professor of Political Science and Policy Studies Dillan Bono-Lunn discussed the intentions and likely outcomes of the bill, as well as the importance of its passing to the country.

What is Biden’s new bill?

“You can describe this piece of legislation in three categories. You have some climate investments — including clean energy tax credits, environmental justice grants and some drought resistance funding. You’ve got healthcare investments, including Medicare being able to negotiate prescription drug prices for Medicare beneficiaries, extending Affordable Care Act subsidies … Finally, taxes. The biggest aspect of the bill, in my opinion and in any case, is this big investment in IRS tax enforcement. So there’s other provisions that do make a difference, like new corporate minimum tax of 15% and a new 1% excise tax on stock buybacks. There was no tax on stock buybacks before.

So those are in their own right consequential, but probably the largest piece of the bill regarding taxes that have gotten lots of attention is around this big increase in the IRS tax enforcement budget. So this is $80 billion over 10 years. It goes to enforcement activities like hiring and training auditors, IT systems modernization and taxpayer services. Even without any changes to the tax code that I just mentioned, investing $80 billion in the IRS over the next decade is estimated to produce $203 billion in terms of additional revenues to the government. This was, as far as I can tell, exactly what was proposed last year, so it’s interesting that this hasn’t changed at all.

The IRS budget has been in decline since 2010, and that’s resulted in some pretty sizable tax gaps, the gap between what people ought to be paying and what they are paying. It amounted to around $440 billion between 2011 and 2013 alone each year, but that estimate has ballooned to where — without this bill between 2020 and 2029 — we were looking at a tax gap of maybe $7.5 trillion, so this is certainly a really fiscally positive aspect of the bill. Having said that, it’s an unprecedented investment in the IRS budget. This is like more than 90% of the IRS budget is being increased. We’re more than doubling the number of IRS staff. So it reasonably has gotten a lot of attention because of what really is unprecedented.”

What kind of effects do you see the bill having?

“In terms of the bill’s ability to address inflation, it’s pretty limited, especially in the short term. Average Americans will not discern an at least a noticeable difference in costs, or prices. In the long term that might be a little bit different. If we’re sort of thinking about macro economic trends, prices in five, 10, 15 years — we might see an impact. Some of the best estimates are really around it being at least inflation neutral, maybe moderately reducing inflation, but by a really small amount. So likely the name was political more than anything else. In terms of climate investments, this is a really big deal. An estimate I believe that came out of Senator Chuck Schumer’s office is that these climate investments will reduce carbon emissions by 40% from their 2005 levels, and they’ll reduce those emissions by 2030. So that’s actually a relatively immediate effect to see such a large reduction in carbon emissions.

We’ll certainly see an increase in taxes collected. I think the devil is in the details. There’s some interesting Op Eds around whether or not the IRS, as it is sort of structurally set up, can really enforce the tax code as complicated as it is — even with additional funding. The hope is obviously that not only do we collect more taxes, especially from our sort of high value, high income earners, but that we also improve services to average taxpayers who are just trying to get help, when they get audited or when there’s some discrepancy in their taxes owed. We’ve certainly seen as the IRS budget has declined in the last 15 years or so that increased audit activity has fallen on to less complicated low income people as opposed to more complicated high income people. Right and so, I think the hope is that we’re a little more equitable in terms of our IRS enforcement activities, that this goes to people who have more than they need and who aren’t paying their fair share.

That’s a really political point of view to take. But I think that’s probably why it has been able to pass, when in previous years there is no cheerleader for a tax collector, right? The ACA subsidies make a huge difference, right? And we’re sort of kicking the can down the road an additional three years and I wouldn’t necessarily be surprised if we extend those subsidies yet again. We have a lot of Medicare beneficiaries and so that really affects them. I think what I’m trying to say by all of the health care stuff, is that this is really consequential for those who are targeted by these provisions. So Medicare beneficiaries, especially, that will make a huge difference in their lives. Will it make a big difference in sort of macro trends or the entire country? Probably not.”

Why should Elon students care?

“The biggest thing is that, as far as I’ve seen, Elon students are really motivated by issues around environmental sustainability and climate change, and so they certainly should care because this is an example of the government recognizing a problem and passing big policies to address it or at least putting a lot of money towards addressing it. Does it change how we live our daily lives? No. Should it? That’s an interesting question. So students should care from the perspective of the government finally passing some large investments around climate change. I think students should also really care with regards to IRS tax enforcement. It’s just really interesting to see how this is going to change people’s daily lives …

It’s death and taxes, that’s the inevitable thing in everybody’s life. So I think that’s important … The tax rate for corporations, the minimum tax rate is 21%, but many dozens of corporations don’t pay that. Companies like Exxon, or Amazon or Merck pay virtually 0% of their book income in taxes, and this 1% excise tax on stock buybacks is also really interesting, especially in the past few years, when we’ve seen companies buying back a lot of their stock. So I think from an economic fairness aspect, students should also care about this. That there is a tendency to be despondent that the government isn’t doing anything with regards to the bigger issues of climate change, or people paying their fair share. If we don’t recognize at least what steps the House, Senate and the president are doing in that, I think that we’re not taking a nuanced understanding of science.”

Do you think we can expect similar bills in the future?

A lot of it will depend on the results of the midterm elections. So right now, there is a slim majority in the Senate and a slim majority in the House. It remains to be seen how the midterms will go. Typically midterm elections in a president’s first term will go to the opposing party, so Republican wins or Republican gains are expected. However, with some recent issues, like the overturning of Roe v. Wade, I think it’s a little less clear. A lot will be dependent on whether or not Democrats can hold on to those majorities. If they can, we can probably expect to see new proposals or new proposed pieces of legislation on the agenda.”