AreYouKiddingTV was back recording social media content on Aug. 26, 27 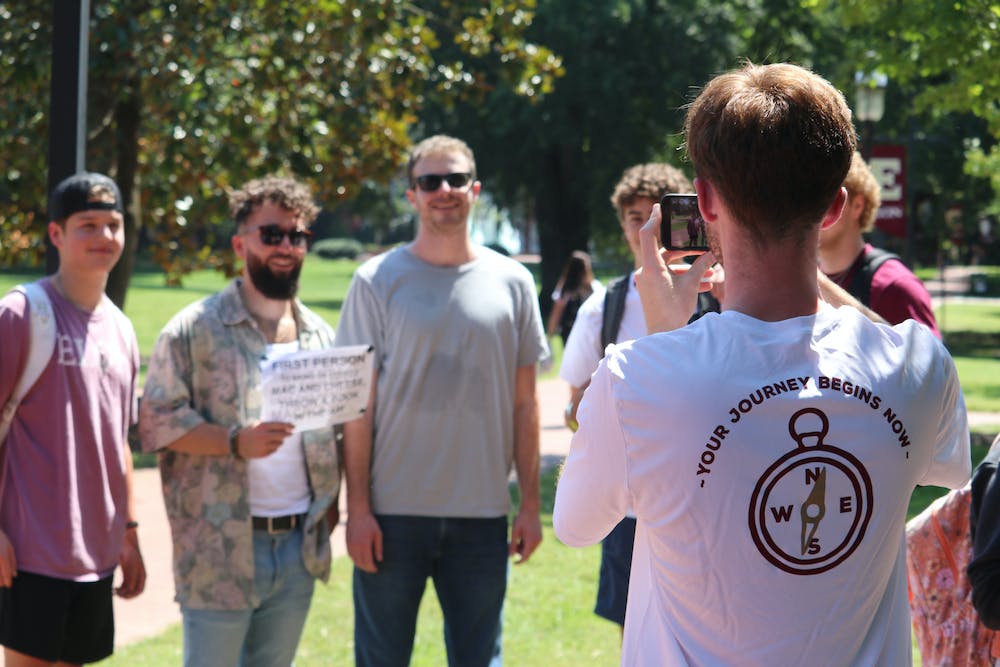 Photo by Ellis Chandler | Elon News Network
Joey Gizzi '18 and Steven Lannum '18 pose with students following the recording of a segment for their viral platform AreYouKiddingTV on Aug. 26. The platform has over 4 million followers on TikTok, where the segments are often posted.

It’s all thanks to Joey Gizzi ‘18 and Steven Lannum ‘18. The two host AreYouKiddingTV and challenge strangers to complete a series of tasks for money or other prizes such as computers or smart watches. Their TikTok page, where most of the content is posted, has almost five million followers. The two visit Elon about twice a year and said filming on campus is one of their favorite spots.

“The paths all come together, and the spot for the camera is just very ideal,” Gizzi said.

Some of the challenges included tasking a student to find macaroni and cheese, throw a book in the air and dump apple juice on themselves. The winner received a MacBook Air. Another student also gave up their phone for 24 hours and received $500.

Today’s challenge was the first time Gizzi and Lannum used three different locations. They called it their “biggest challenge yet.”

Students had to first run on foot to secure their spot on a colored dot. Frankel and three others moved on to the scavenger hunt.

“The dot challenges where we pick the contestants first makes it a lot easier to control the challenge,” Gizzi said. “Then we can put them through these rigorous challenges. They're pretty sweaty, pretty tired. But hopefully the $1,000 prize was worth it.”

To win the prize, players had to find and bring back a frisbee from one of Elon’s fountains. Then, they had to take a selfie with Gizzi and Lannum, print it and return it to them. Next, they had to run to The Oak House, high-five the barista and come back with a coffee. The first person to bring it back had to dump a bucket of ice water on their head to secure the prize.

Frankel said he was on his way to the mailroom when he received a text in a group chat for his dorm floor saying that Gizzi and Lannum were about to begin another challenge. He saw them outside and ran over to participate.

“It's crazy. I've been watching these guys on TikTok forever, and even my mom watches them,” Frankel said.

Freshman Henry Matthews lives on Frankel’s floor in the Global Neighborhood. He was just shy of the prize and came in second place. The two worked together in hopes that one of them would win. Their strategy included throwing one of the four frisbees out of the way to gain time. Matthews also gave Frankel his phone to take the selfie because Frankel’s phone died midway through the challenge.

“I have vocal cord dysfunction. I can't run without losing my breath,” Matthews said. “I chucked a frisbee out of the way so we could just walk back without having to sprint. Then, we went to The Oak House and I saw my friend was ordering coffee. I made her order us two coffees so we could come back faster.”

Because of their teamwork, Frankel said he’d split the earnings with Matthews. Matthews said he was “kind of sad” because he thought the prize money would be a smaller amount, but he had fun participating because he also watches Gizzi and Lannum on TikTok.

“I'm definitely going to give him some of it,” Frankel said. “I’ll probably just save it for now, for a rainy day.”

Both Frankel and Matthews said they were in disbelief that they were able to check something off their college experience bucket lists so soon.

Lannum said AreYouKiddingTV is set to return to campus for more challenges and fun on Homecoming Weekend on Nov. 4-6.