Getting to know William Dissen: a new addition to Elon Dining 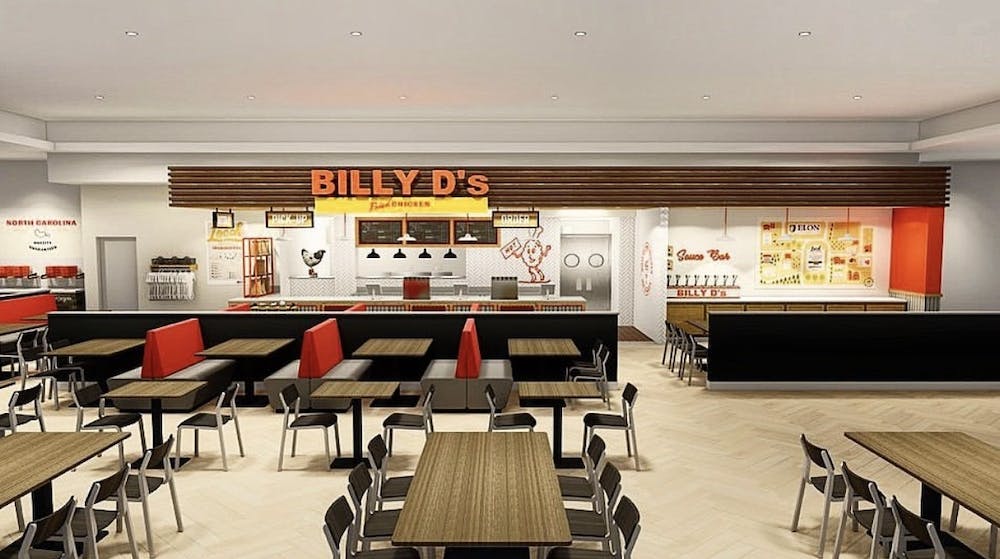 The quick-service restaurant opened its only other location in 2018 at the North Carolina Zoo in Asheboro. The menu features southern fried chicken sandwiches and baskets with sides such as macaroni and cheese, waffle fries and coleslaw. Billy D’s will be available as a retail option for students who have purchased a meal plan, and the Chicken Shack downstairs in McEwen Food Hall will be discontinued.

The restaurant is executive chef and owner William Dissen’s fourth restaurant in the state. He opened his first restaurant, The Market Place in Asheville, and fine dining restaurant Haymaker in Charlotte prior to opening both Billy D’s locations.

A West Virginia native, Dissen currently lives in Asheville. He said he’s always enjoyed cooking, and his first jobs as a teenager and college student were in restaurants. He was unsure about his career path after graduating from West Virginia University, but knew corporate life wasn’t for him.

After earning his undergraduate degree, Dissen attended the Culinary Institute of America, starting his career as a chef and graduating with honors. He said he was inspired by time he spent on his grandparents’ farm in rural West Virginia as a child. As he got older, he became fascinated by the way they lived off the land, using honeybees to help pollinate their garden and forging in the woods for mushrooms and ginseng.

As a chef, he found himself connecting more with the land around him too.

“You get to do that by default because you're dealing with fresh produce and fresh seafood and meats and seeing, touching, feeling things on a daily basis,” Dissen said.

Following his graduation, Dissen worked in restaurants around the country before going back to school a third time at the University of South Carolina. He earned his master’s degree of hospitality with concentrations in restaurant and tourism management, which he thought marked the end of his restaurant career.

“I was kind of on this path of saying, I'm done with restaurants, independent restaurants, I'm going to get a corporate job and work nine to five, get a Volvo, have 2.5 kids, all those silly American dream things they put in your head,” Dissen said.

He took a job as an executive chef after graduation and used it as a placeholder before deciding to get back in the business and open his first restaurant in Asheville. All of his restaurants carry a farm-to-table ethic, and he said his time working in California connected him to his grandparents and made him realize that to be a great chef, he needed to use the best ingredients.

“My grandmother just cooks such delicious food and it's because you pull it right out of the garden,” Dissen said. “You’re eating ingredients that are still living and breathing, so to speak. To me, those best ingredients were sourced right from right from the farm and right from the source.”

That ethic is what brought Dissen to Elon. He was on a tour of Tidewater Grain Company in Oriental, North Carolina, when he met former Elon Dining executive chef Jay Vetter. The two realized they shared the same passion for locally-sourced food, and Dissen was able to become the community partner Elon Dining was looking for at the time.

Both students and faculty wanted a fried chicken restaurant on campus, according to Dissen. To test out the partnership, Elon Dining held a pop-up with the restaurant on March 10, 2022 where community members could meet Dissen and sample some of the menu items. Dissen said this opportunity was a chance for him to grow his brand. All of the chicken at the restaurant is locally-sourced from Joyce Farms in Winston-Salem.

“Americans certainly love quick-service style food because of our fast lives,” Dissen said. “That’s kind of been my pivot in the past few years thinking through different business models. It’s an opportunity to help push local food and community-based agriculture across more outlets. It's an opportunity to hopefully do some better things for our communities, create a more sustainable food movement and try to get more good food into the hands and mouths of hungry eaters.”

Dissen said he considers his brand to be open-minded, whimsical and appealing to everyone. He said opening the location at Elon has been a streamlined process because of help from Elon Dining and Harvest Table, as well as the decision to keep the menu the same as the Asheboro location.

Once the restaurant gets underway, Dissen is excited to offer seasonal side dishes, specialty chicken sandwiches and Billy D’s merchandise.

“Hopefully, at some point, everything keeps moving ahead in a good way,” Dissen said. “We hope to implement a brunch or breakfast menu also. We make these really delicious buttermilk jalapeno biscuits at our fine dining restaurants, and they make really delicious fried chicken biscuits.”

The classic fried chicken sandwich with coleslaw and pickles. He's also a fan of the banana pudding.

The restaurant is still under construction with an undetermined opening date due to the general contractor’s schedule. Dissen knows they are pushing to be open by the beginning of the fall semester, but if not then, hopefully a week or two after the semester begins.

Because he lives in Asheville, Dissen said he will be on campus on and off throughout Billy D’s opening, but he hopes to be present as much as possible to say hello to everyone. Dissen said he’s excited to be back on a college campus.

“I’ve been in school three different times for different degrees. For me, there's something really invigorating about education,” Dissen said. Being on campus is just stimulating in terms of being in a place where people are there to learn and grow. I feel like that's something I'm trying to do in my life every day. I'm excited to meet lots of new faces, meet the students and faculty and do our best to make some delicious food for everyone.”