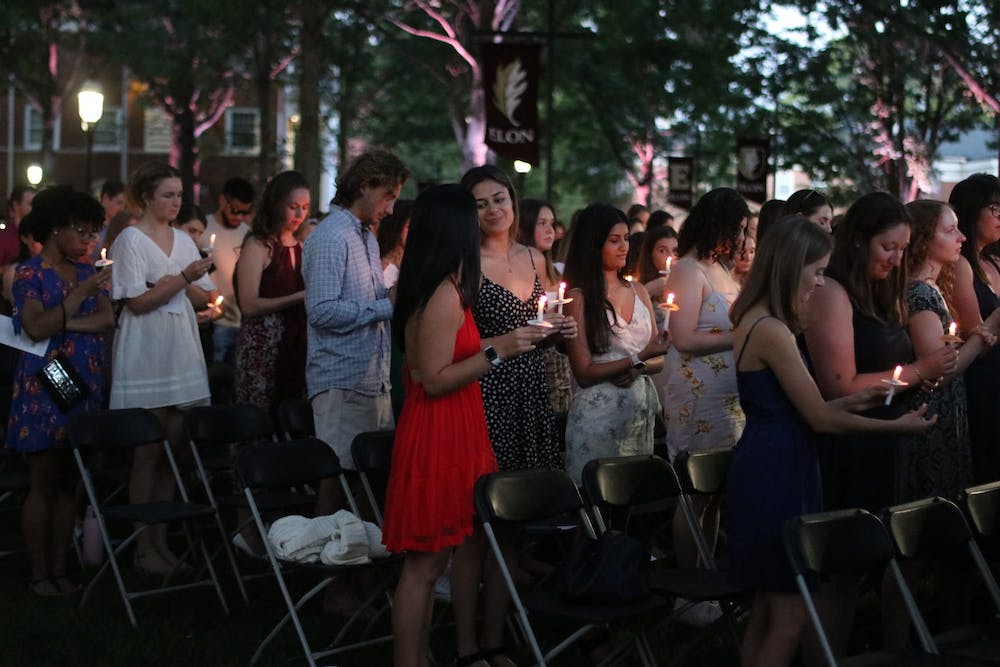 Four years ago, the class of 2022 gathered Under the Oaks for the first time during New Student Convocation. On May 17, graduating seniors gathered once again to reflect on their time at Elon.

For University Chaplain Rev. Kirstin Boswell, this year’s ceremony was her first since beginning her role. She said she looked back at photos and videos of the graduating seniors receiving their acorns in preparation for her remarks.

“Through your growth here, you will become as much a part of the history and legacy of this place as the oak trees that have stood for generations,” Boswell said.

She called the class “young and carefree” and spoke about how global and national events would come to impact classroom discussion topics and study abroad opportunities over the next four years.

“Did you know on that day, Under the Oaks on that hot day in 2018, how much you would learn from internships and work opportunities?” Boswell said. “From your sports teams, your extracurricular pursuits, your sorority sisters, fraternity brothers and your friends? Did you have any sense of the person that you would be sitting here four years later?”

Senior lecturer in religious studies L.D. Russell gave the Baccalaureate Address. Russell is set to retire at the end of the academic year, and he spoke about what the future holds for himself and the graduating class.

“Like you, I'm looking into my future, too, with excitement and uncertainty,” Russell said. “And so, you know, are we going to be OK? Are plans going to work out? And what if they don't?”

He also addressed global and national events — specifically ones that affected the class of 2022’s childhood, such as 9/11 and the 2008 economic recession. Russell commended the class of 2022 for its resilience, and he compared the graduating seniors to previous generations that also endured large-scale events during their collegiate years.

“Here you sit this evening, as we emerge from a global pandemic that has altered all our lives, stolen so much joy and rattled our nerves,” Russell said. “I mean, I'm wondering if you might feel like life has an end for you.”

The ceremony closed with a candlelight ceremony that symbolized Elon’s motto of “numen lumen,” meaning “spiritual light” and “intellectual light.” At the end, the class of 2022 received oak saplings in the same place the students received their acorns.

Senior Katie Dalrymple works in the Numen Lumen pavilion. She said she saw the work that went into the event from behind the scenes and thought it was wonderful to see it all come together in a new kind of ceremony. Dalrymple said the event was bittersweet.

“It's great for it to be full circle and move on from just a little acorn, but I'm definitely not ready to say goodbye to all the friends I've been sitting next to for four years,” Dalrymple said.

Senior Marcinah Lovick thought the ceremony was beautiful and said getting her sapling was
“surreal.” Lovick was a transfer student, so she didn’t experience New Student Convocation with her peers four years ago.

At the ceremony, Lovick wore an Elon t-shirt and sat with the first friends she had made at Elon. The shirt was the first Elon shirt she ever purchased and took a picture in, and wearing it to the ceremony surrounded by the people she began her journey with created a full-circle moment for her Elon experience.

“We've been doing this for four years and working so hard for four years,” Lovick said. “Even yesterday, I couldn't imagine getting my sapling and even planting it. But now it's here.”

A number of celebrations and programs will take place the rest of the week, with the 132nd Undergraduate Commencement ceremonies taking place at 9 a.m. and 2 p.m. on Friday, May 20.