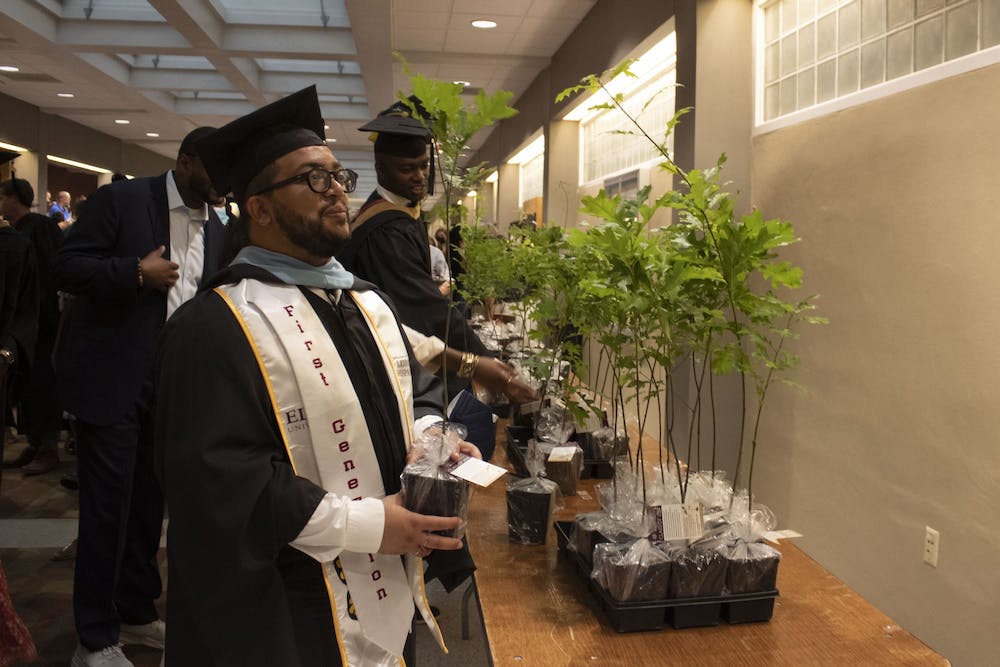 
Nelson Isabel selects his oak sapling after receiving his master's degree in higher education. Ysabel received a bachelor's degree from University of South Florida and currently works as a graduate apprentice for in Elon's Center for Leadership.

Kaitlyn Moonsammy was awarded her Master of Science in accounting degree at Elon University’s graduate-level commencement ceremony on May 18 — two days before she receives her bachelor’s degree at Elon’s undergraduate ceremony.

Moonsammy is completing the university’s accelerated 3+1 dual degree program, which gives high-achieving students an opportunity to earn both a bachelor’s and master’s in four years. As her family gathered around her after the commencement ceremony, Moonsammy said the accomplishment is especially rewarding, given she is also a first-generation college student.

“Being the first in my family not only to get a bachelor’s, but also a master’s has been my biggest thing,” Moonsammy said. “Just to go for anything and everything.”

Moonsammy was one of 89 students who received master’s degrees in accounting, business analytics, management, business administration, interactive media or higher education at the ceremony held in Alumni Gym.

In addition to those awarded their degrees, eight graduates of the iMedia class of 2020 were in attendance, as their official commencement was never held due to the COVID-19 pandemic.

Carol Cunningham, vice president of consumer insights and business at Black Entertainment Television, delivered the commencement address. The daughter of Cuban and Honduran immigrants, Cunningham was the first in her family to attend college.

As she addressed the graduates, Cunningham charged them to follow their own passions using the solid foundations of their respective programs.

“I promise you it’s not always about the money you earn but the enduring passion you’ll find when you’re doing something that really, really matters to you,” she said.

Cunningham closed her address with a reference to the book, “What Got You Here Won’t Get You There” by Marshall Goldsmith. Describing the mindset of a successful leader, she alluded to the book’s cover, which depicts a man climbing a ladder.

“Whether you’re at the top of the ladder, on the middle rung or smack dab on the bottom, don’t be afraid to start where you are and live a life that manifests every inspiration and aspiration that you have,” Cunningham said. “That’s how successful people became even more successful.”

Nelson Ysabel, a graduate apprentice in the Center for Leadership, received his Master of Arts in higher education degree. Ysabel reflected on his experience as a first-generation American and college student as he selected his oak sapling, a tradition honoring students’ growth during their time at Elon.

“I’m very thankful for the past two years. They’ve been such a wild ride,” Ysabel said. “So thankful to the students, and the staff, and the faculty and Elon as a whole too."