Stemming from a love of skateboard, Elon Wheels cultivates passion and community on campus 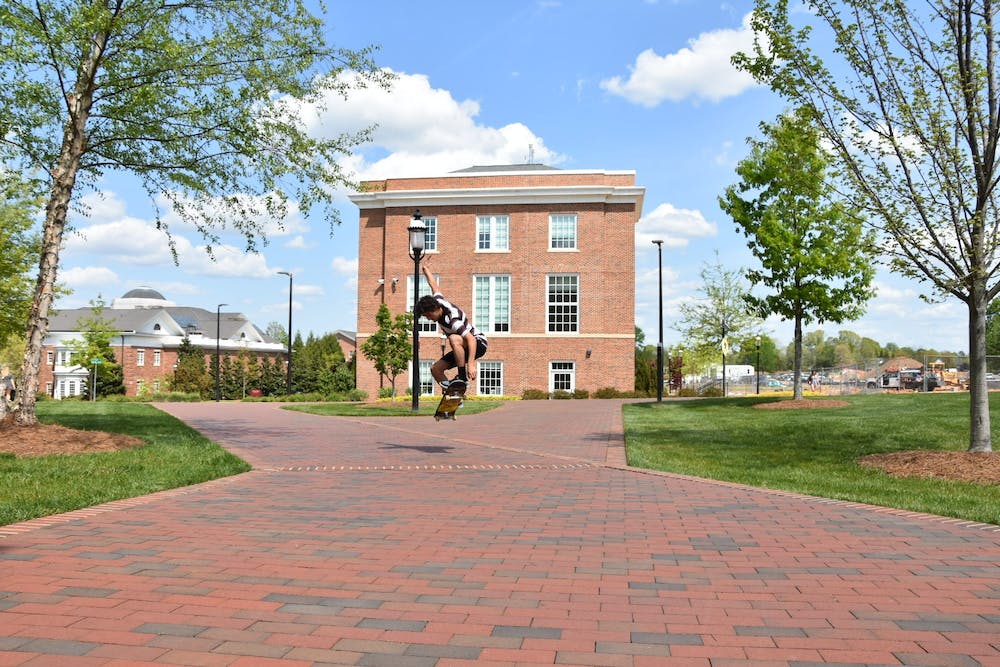 Photo by Hope Valenti | Elon News Network
Freshman Kait Whiteside demonstrates a move on his skateboard in front of Inman Admissions building and the Moseley Center on campus. Whiteside discovered his love for skateboarding during the beginning of the pandemic.

Outside McEwen and Lakeside dining halls, the echoing sounds of wheels rolling and scraping against the pavement can be heard. Those on campus watch skaters utilize nearby tables, chairs and ramps as they transform the environment into a makeshift skatepark.

At the center of the movement is Kai Whiteside, a freshman who found a love for skateboarding during the beginning of the pandemic. When he arrived at Elon, Whiteside began to bond with other students who shared his passion and formed a small community around skating.

As the number of students grew, so did the need for an organized platform, so Whiteside created Elon Wheels, an organization for students with a passion for skateboarding, biking, roller skating or any sport involving wheels.

“We had this idea where we really wanted to create a safe space on campus for all skaters and all wheels,” Whiteside said.

Elon Wheels has an active social media presence on Instagram and YouTube, where their pages consist of videos and images of participants skating. Whiteside hopes these pages will showcase the reality of the group and its purpose.

“It’s become an important piece and aspect to make it a safe spot where people can see the passion and the positivity around wheels,” said Whiteside. “The main goal is to create a sense of community, both with people who are on wheels and people who are not.”

Through social media, the group has also gained attention outside of the Elon community. Whiteside said Elon Wheels has collaborated with skateboard enthusiasts from University of North Carolina Greensboro who came to Elon’s campus and skated with them.

Despite the positive feedback from those outside of Elon, Whiteside said the group has dealt with other students, faculty and staff on campus who have a negative perception about Elon Wheels.

Chief of Campus Safety and Police Joe LeMire said that complaints have been made against the group, with some individuals claiming they fear for their own safety. As a leader, Whiteside wants the community to know the group is working to improve its image and relations on campus.

“One of the things I hear a lot, whenever the cops come out, is that someone called saying that they felt unsafe,” he said. “That's always very wild because we're always just by ourselves, so it's really interesting to hear this because it does show that there is that stigma.”

LeMire said the Elon police force is supportive of Elon Wheels and its sport, as long as participants adhere to community guidelines such as yielding to pedestrians and not skating in the streets.

Currently, he said, there is a lack of understanding surrounding the rules and regulations of skating in the town of Elon. He advises skaters to familiarize themselves with these limitations in addition to wearing protective gear in order to protect themselves from any unwanted injury or infractions.

Whiteside and other members of Elon Wheels have communicated with officers to increase their perception of the club. They have expressed their need for more on-campus support. Whiteside said Elon has been receptive to their requests, and are collaborating with the group to find a solution.

LeMire said officers have been met with respect when enforcing these laws but remain worried for the safety of both passersby and the skaters, in addition to possible damage to campus and individual property.

“We'll have students try to do tricks and different stuff on the random railings or over by flower beds —  that can cause damage to campus,” LeMire said.

Sophomore Holly Brakebill said she oftentimes gets annoyed when she encounters skateboarders and worries they are not being as cautious as they should be.

“Anytime I see one coming in my direction, I’m convinced they will either run me over or fall,” Brakebill said. “It really makes me nervous. What if someone gets hurt?”

Brakebill said despite her apprehension watching the skaters, she does find the sport fascinating.

“It can be fun to watch,” Brakebill said. “I think they’re good at what they do — it’s just nerve-wracking to see from the outside, so it’d be cool if they were more careful and mindful of that. But they are pretty big on campus and bring a lot of excitement.”

Student concerns have fueled the club’s desire for a designated spot on campus, according to Whiteside, where individuals can come together and skate without putting others or campus property at risk. The club hopes skating in a more isolated location would diminish any feelings of insecurity to those who feel unsafe.

“I always compare skateboarding to artists — if you give a painter a paintbrush and paint but no canvas, they're going to want to paint on the walls,” Whiteside said. “I think the number one thing you can do is be in these conversations and understand where we're coming from. With skateboarding, we're very creative. We really just want to do what we want and what we love.”

Whiteside said he and other members have been in communication with the Elon administration to make their dream a reality. Though LeMire supports Elon Wheels, he said he does not see this as a feasible plan due to the lack of space on campus.

“They're not trying to cause a problem, they really are just looking for the right place to do it,” Lemire said. “They enjoy their craft. Some of them are very talented and just want to be able to do that. It doesn't mean we don't want to or don't want people to skate. It's really the practicality of whether it could be available right on campus.”

Whiteside said Elon Wheels welcomes all, regardless of experience, and embraces spectators and beginners. He wants to build a positive perception of skating at Elon and give others the opportunity to experience the same joy and sense of community the sport has brought him.

“Being able to be that person and fuel other people's passions and make sure that they're growing has given me a sense of purpose in a way,” said Whiteside, “Anyone who pulls up with or without their skateboard is entering a family. We just want to share that passion and positivity with everyone.”