Class of 2022 reflects on campus 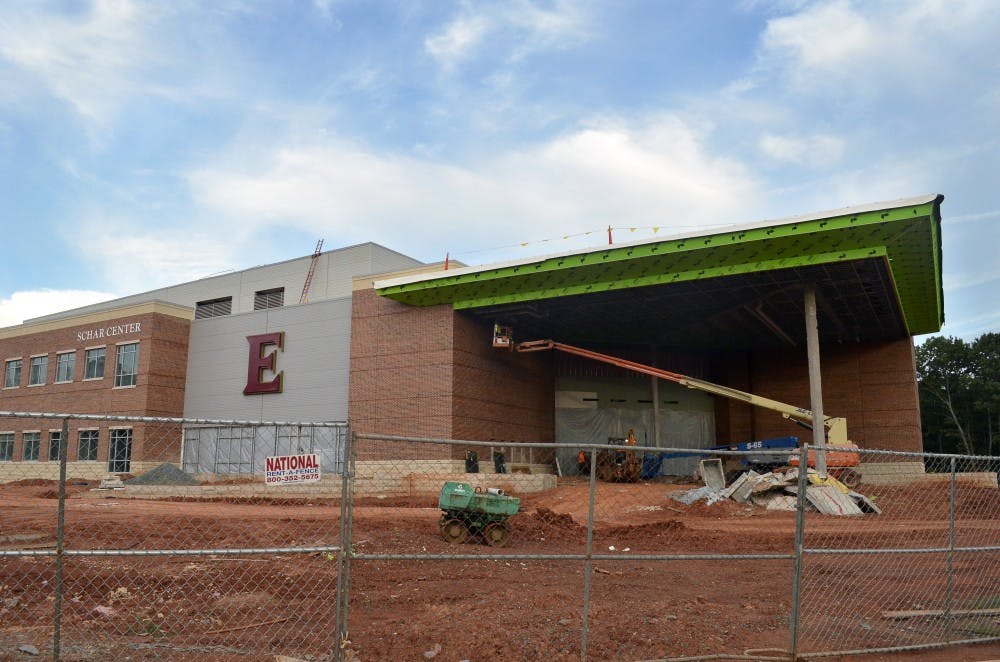 Photo by Caroline Brehman | Elon News Network
A look at the progress of Schar Center as workers continue the construction on the arena.

When graduating seniors first stepped foot on Elon’s campus in Fall 2018, construction on several major renovation projects was wrapping up.

In August 2018, Elon’s newest residential neighborhood, East, was opened. The neighborhood is a trio of three-story residential buildings — each one housing 103 students — located beside Jimmy Powell Tennis Center, which had just unveiled its new tennis pavilion that month, as well.

In October and November of 2018, the newly-renovated McEwen Dining Hall opened its doors. The dining hall was renovated over the 2017-18 academic year and, upon its completion, brought a variety of new dining stations and two retail locations, Pei Wei and Village Juice and Kitchen.

Richard W. Sankey Hall was dedicated in early November, housing a variety of programs like the Financial Literacy Center, the Doherty Center for Creativity and the Chandler Family Professional Sales Center.

Later that month, the Elon men’s basketball team held its season opener against University of North Carolina at Chapel Hill in Schar Center. Although the Phoenix lost 116-67, it was a historic game — 5,245 fans were in attendance, exceeding Schar Center’s capacity by over 100.

The following year in August 2019, indoor renovations at Virginia Hall were finalized. Also that fall, the newly-completed LaRose Student Commons was dedicated. The 10,000-square-foot, two-story building located in Historic Neighborhood has been home to study and gathering spaces for students and faculty ever since.

In January 2020, the Elon Inn was officially opened to the public. The $31 million facility fulfilled the university’s long-standing goal to have an on-campus hotel and conference center.

As the class of 2022 prepared to enter senior year, Moseley Center underwent second floor renovations, improving gathering spaces and offices for campus organizations like the Gender and LGBTQIA Center and the Center for Leadership.

Other projects during Summer 2021 included renovations to Smith Hall, updates to El Centro de Español, the installation of a new outdoor workout facility and the completion of a Club Esports facility in Global Commons.

As seniors prepare to graduate and depart Elon, other campus construction projects are being finalized in time for the class of 2022’s return to campus on Homecoming Weekend next fall.

Graduating senior Jack Swartz first toured campus when the Koenigsberger Learning Center was being built in 2017. He said being able to see the many changes on campus over the past few years has made his Elon experience even better.

“Seeing the developments on campus really make the campus feel more modern, clean and more beautiful than before,” Swartz said.

Swartz said he is excited to visit campus in the future and see all the changes.

The new baseball indoor performance facility is set to be completed later this week and will be home to indoor batting cages, a locker room and offices for baseball staff.

Other renovations set to be done by fall include the completion of Founders Hall and Innovation Hall located in the new Innovation Quad, as well as renovations to McMichael Science Center. Carolina Hall and Hook, Barney and Brannock residence halls will also be undergoing construction this summer.