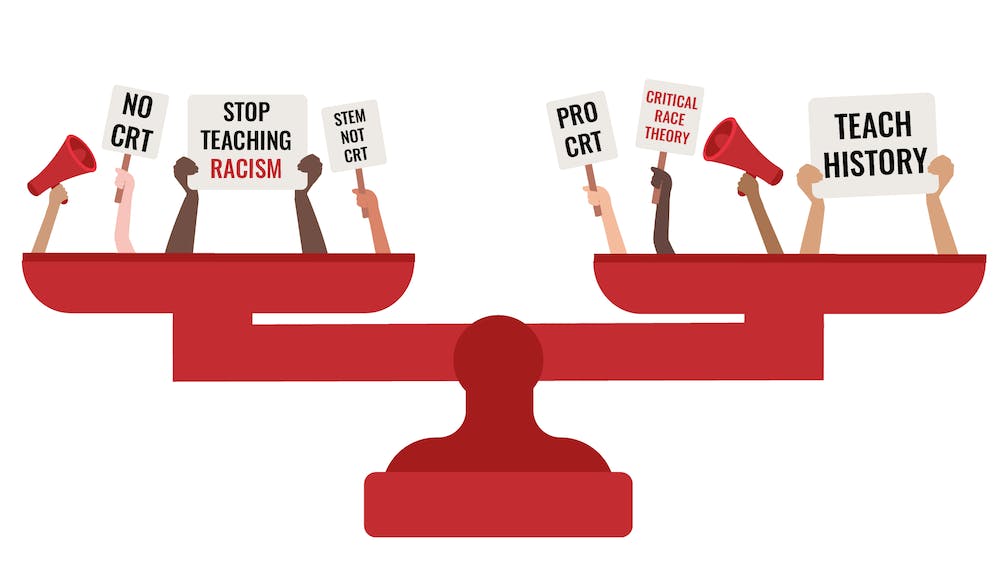 Photo by Caroline Mitchell | Elon News Network
According to the American Bar Association, critical race theory is a theoretical framework that aims to understand how race intersects with different institutions in society.

On April 7, Justice Ketanji Brown Jackson, who was nominated by President Joe Biden, was confirmed by the Senate to serve as a member of the Supreme Court. Jackson will be the first Black woman to serve on the Supreme Court in the 232 years since its establishment. According to the American Bar Association, critical race theory is a theoretical framework that aims to understand how race intersects with different institutions in society.

Jessica Carew, assistant professor of political science and policy studies, discusses the intersection between race and the criminal justice system and the relevance of Jackson’s confirmation to this assessment.

Since the Supreme Court was established in 1789, and out of the 114 Supreme Court justices, 108 have been white men, could you explain how this is relevant to the critical race theory’s examination of race in law?

“The thing about this is, there is such a major imbalance largely because of this tradition of exclusion or inegalitarianism that sits in concert with our ideas around egalitarianism. We believe strongly in the concept of centering equality within our system. Nevertheless, we have many laws and practices that have very purposely directly excluded individuals.

All those various positions often conjure a particular image in our mind, and that image is connected very closely to various ideas of worth and belonging.

A lot of that comes from, as I said, those stereotypes, but it comes from these hierarchies and power differentials that already exist very directly within society.

I would take that back to a quote from historian Mia Bay: ‘There’s a racial divide emerging that people begin to see as natural, and that’s part of where the idea of race comes from. It’s just a tendency for people to see existing power relationships as having some sort of natural quality to that.’

So with that, because we have seen certain groups and individuals in a position of power, in decision making positions, we then just expect that that is just the natural order of things and that is how things ought to be.

So when you combine that with a system that is set up in a way where on its surface it appears as though it is supposed to be equitable and fair and encouraging some sort of meritocracy on a whole.

Then you are going to expect what you find that naturally comes out of that system is automatically going to be what is right, fair and good.

That has led us to this point of just broadly accepting that we have this significant difference when it comes to various demographics on the court, and we just accept that is the case, and understand that, historically speaking, there were a lot of people that were excluded, so of course we are going to have this imbalance.

Without then questioning so much why since we have begun to change some of those opportunities for access, especially around the 1960s.

Why is it that we continue to see such a significant imbalance, especially when it comes to who it is that gets to be on the court? That is where we can see the usefulness of theoretical perspectives like the critical race theory, for example, and others to help to explain these differences and inequalities that we have continued to see.”

Do you think there was any event or buildup of events over the past few years that led to the confirmation of Jackson to serve on the Supreme Court?

“This is tough for me in terms of how to characterize this because one of the things we also see is in a perspective like critical race theory, for instance, is the recognition that what people may consider to be racial progress is not linear. It is something that is not always moving forward in a particular way.

When we begin to attempt to trickle away race as a specific qualification — particularly in terms of the way we see racial inferiority or superiority over time — when we begin to strip away some of that and attempt to see people for their qualifications, and characteristics and their aptitudes on their own, then we often will see some sort of push back. We are more likely to see stops and starts.

I do not know that I would say there is any one event that would push things further to have had this occur; however, I would suggest that this is that arch of progress that we have been seeing build up over time.

In some ways it is perhaps a response to some of the backlash we have also seen over time.

For example, there is certainly some of this build up around Americans seeing to a greater degree some of the systematic inequalities that we have expected to have then been removed from the system with the 1960s Civil Right Act.

Little by little, people have been getting to be shown some of the ways in which we see systems of inequalities continue to operate.

For example, you have Michelle Alexander’s ‘The New Jim Crow,’ her book that came out, or Ava Duvernay’s ‘The 13th.’

You have a little more in-depth examination in the ways in which you see systems very directly make laws and policies relating to the criminal justice system allowing for racial inequity.

When people begin to see that, then they start to question some of the other types of inequities they see in society, just like the imbalance on the Supreme Court.”

With that being said, do you think Jackson’s confirmation to the Supreme Court could be a promising sign that people are willing and ready to see more diverse and inclusive government representation?

“We are definitely seeing some partisan and political issues happening here.

Certainly, with the 2020 election, Joe Biden was pretty vocal and adamant about this idea that if he were to be able to be in a position of nominating to someone to the court, that he would nominate a Black woman.

That in and of itself was something that set off some alarm bells for some people. People saying why would you want to do that, shouldn’t you be looking for the most qualified people?

Which is a particularly telling idea.

It implicitly suggests in that Black women are automatically not going to be the most qualified people that could have been chosen which connects to the earlier idea I was talking about that we have these prototype images for who it is that has an aptitude for something or a particular position.

The question here becomes why is it that even after we have seen an increase in positional and education-based inclusion for African Americans and for women in the mid 20th century, why is it that we have continued to see this lack of representation of people from marginalized groups?

This is important because we have to also recognize that there are plenty of stellar people who have been overlooked for these positions for many decades.

So, what we are not recognizing is that some of those people have been overlooked specifically because they are not white men.

So historically, we have not been recognizing people, so let us now actually open the pool of applicants to those that are stellar from all backgrounds.

That is really what is a part of what is missing from this conversation.

What is also important to recognize is some of the political pressures that have come about because of some of these demonstrations over the past ten to fifteen years which have then had influence on what political candidates say they will do or what political actors decide they are going to do when it comes to Supreme Court nominations.”

Do you think certain Senators were trying to frame a case for Jackson engaging in judicial activism? For example, she was asked questions insinuating how she might approach a case such as Loving v. Virginia?

“I believe it was Senator Cornyn who asked her about Obergefell v. Hodges which is the court case that deals with marriage equality along with sexuality, but he was really trying to deal with a specific legal issue that has to do with the balance of power between the national government and the state.

So, the way that this ends up having a connection to Loving v. Virginia is that we know that states have set up laws that prohibited marriage across races in the same way they did same sex marriage. The idea that Cornyn was trying to get to was that we should be allowing states to make these decisions regarding the type of laws they want to make.

That is a balance of power issue, it is an issue of federalism and the balance of what the general make-up of this power should look like. What we know about that is that there are different people with different experiences and perspectives particularly about what kind of thing constitutes a state’s right to have power over and what that means when it comes to marginalized populations.

One of the things that we have looked toward is to ensure that the federal government has opportunities to step in occasionally if they feel the state is not ensuring equitable treatment for their people across the board. Here, we look towards the equal protection clause in the 14th amendment.

Nevertheless, I think that some people will expect they are going to have some idea of how she ought to operate because of her demographic make-up, as well as because the fact she was nominated by a Democratic president, but that does not mean that every other Supreme Court justice sitting on the court does not have some kind of connection to these issues or some sort of set of ideas they have held over time.

Unfortunately, it is an unfair way of thinking about or perceiving her position on the court when we do not turn around and do that for every other individual that is sitting on the court as well. It presupposes that she is in some way not capable of engaging in judicial deliberation with her own personal views, experiences and ideas. However, I do think that, yes certainly, her position and her experiences positionality may have some influence when it comes to this particular type of issue but not necessarily.”