Applicants must go through application process with minimum of 3.5 GPA, winners receive a $20,000 scholarship for research projects 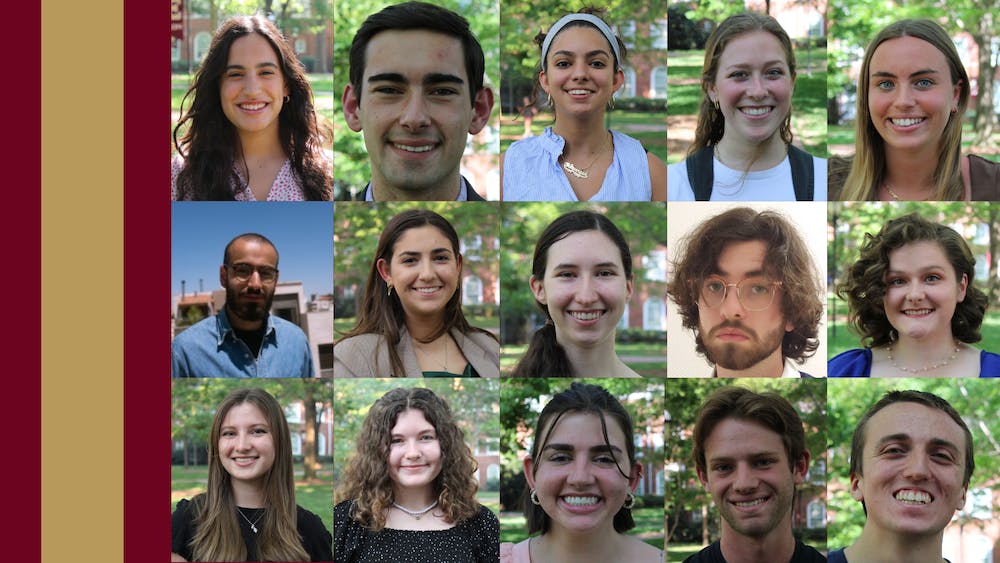 The Lumen Prize is given to students trying to attain serious and ambitious goals during their sophomore and junior years, according to the Lumen Scholars background page on Elon’s webpage. Winners of the prize receive special mentoring and support for graduate fellowships and international awards, along with a $20,000 prize for research and scholarship assistance. According to the requirements for Lumen Scholar’s on Elon’s website, students applying to the Lumen Prize must be given to students with a 3.5 GPA or higher, must be clear in pursuing two more years at Elon, and must be mentored by a staff member. Students must write a proposal and go through an interview process as a part of their application.

These are this year’s Lumen Scholars:

“To have something like the Lumen Prize, to be a Lumen Scholar, is kind of this proof of my hard work and that people who aren’t astrophysicists but listened to me for twenty minutes and thought my research was important enough to give me the grant is fulfilling.”

Project: Assessing the Health Care Utilization of Emerging Adults with Type 1 Diabetes in the College Setting: Perspective of Students, Parents, and Providers

“By interviewing these populations we’ll better understand the patterns that students are utilizing while on a college campus and hopefully that will inspire interventions within health care fields and for physicians specifically to address the needs of college students with Type 1 Diabetes.”

Project: Can Music Help Healing? How Arthritis Patients May Benefit from Playing the Piano

“It’s very central to my life. The piano side comes in … I’ve definitely been involved with music most of my life so that was a personal interest. And then I also happen to have arthritis myself so that’s another side of the interest. Then being able to combine them into research was a really, really cool opportunity.”

Project: Investigating the Role of ASXL1 and ASXL2 Proteins in Leukemic Cell Lines

“I knew I wanted to do something with leukemia. It’s something I have always been really passionate about because my cousin was diagnosed with leukemia when she was eleven. And so ever since then I have been running bone marrow drives.”

“There have been a lot of studies done that have focused on that issue and a lot of current medical research that has proven that bias is within the medical system in general. Though acknowledging is a really important first step, like acknowledging that there are these biases and some things may be unreliable, I think it is important that we, as a medical and engineering community, we put energy and focus into creative solutions.”

Project: Hell in a Helmet: Assessing the Effects of Low-Stigma Group Exercise on PTSD Symptoms in Veterans

“I first had the idea from one of my English professors. We had a project that was very heavily research based and I kind of went all into it. I would meet with her frequently and she was like, ‘Josie calm down. You don’t need to go that hard’. But she recommended it. She said if you really like research you should go to the Lumen Scholars.”

“I hope my research can show what children are capable of learning. One of my research questions looks at how inquiry and reflections are built in early childhood and formulated in early childhood. I think learning about that and what tools we can give them will help us with furthering their education.”

“One of the things about this project is that Texas, the state that I am using for my study, is undergoing active abortion legislative changes right now and adding to this body of work at this moment is particularly important.”

Project: The Dark Side of Domesticity: Tracking the Evolution of the Female Gothic in Victorian Literature

“I think it seems like it doesn’t have as much of an impact because it is literature and it’s not like me creating some scientific feat. But I do believe that it will never stop being important or relevant to talk about literature and talk about feminism because they are evolving topics.”

“It was almost like they had a faith in science like it was a religion and Nietzsche really shattered that, so he has this big important place in intellectual history. But there were other people before him and around the same time that had similar ideas, and they’re never really given the same attention.”

“I was really passionate about researching, solving issues and creating plans to help Puerto Rico. I always had that passion, but it was when I came to Elon that I realized I could combine those two. That I could help Puerto Ricans while being a psychologist.”

“There was a huge gap of literature for Middle Eastern North African women because of the politics surrounding the census and how MENA is technically considered a race. Oftentimes data for MENA gets mixed up in the African American category or ending up in the white category.”

“You go to the doctor, run some tests and you give them their blood. They run that off to the lab, and it takes two weeks to get those results back. One of the goals will be scanning the cell with real time information and ideally interpreting the cell. Being able to have information about your body immediately is much more valuable to your health than waiting two or three weeks.”

“It’s slow, and not as fast as people make it sound. My paper is a very important step in solving this problem. That’s what I’m trying to be. This paper won’t save lives right now, I’m a little bit more realistic with that. But I know for a fact that if I do this well and the results come out where I want them to be, it will be a really good first step towards saving lives.”