Elon Board of Alderman recognizes Juneteenth as a holiday, updates town development ordinances 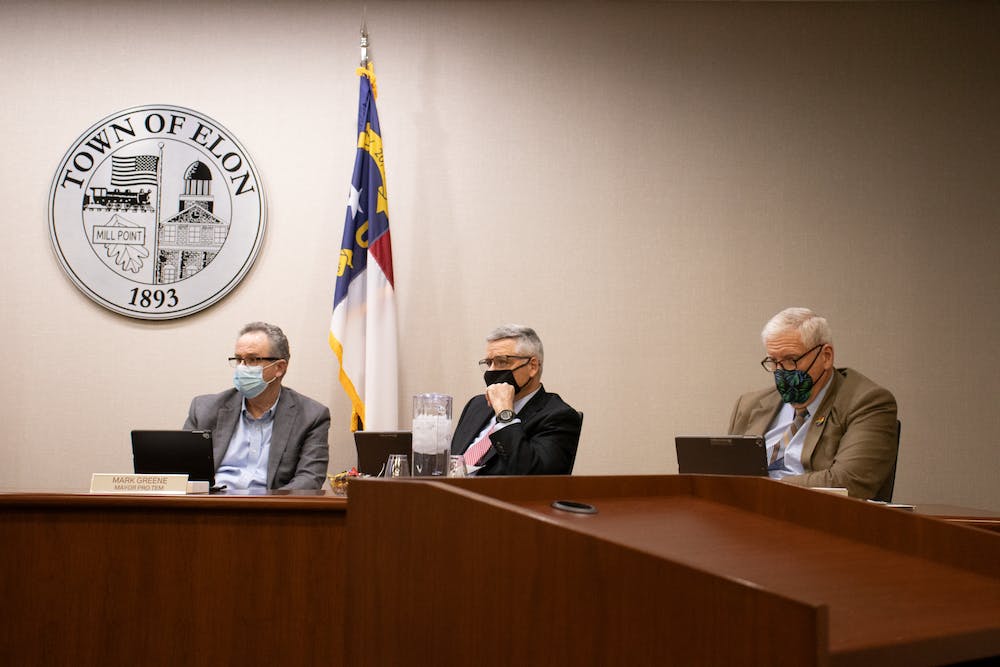 Photo by Gram Brownlee | Elon News Network
The town of Elon Board of Aldermen members at the regular session at town hall on Feb. 15. From left to right, Mayor Pro Tem Mak Greene, Alderman Monti Allison and Alderman Randy Orwig.

Juneteenth will now be an official holiday in the town of Elon, after a unanimous vote in the Board of Aldermen meeting on Feb. 15. The board also passed a new land development ordinance.

Though President Joe Biden signed it into law in June 2021, North Carolina has yet to recognize Juneteenth as a federal holiday. The official designation of Juneteenth in Elon will give all non-essential town employees the day off — their twelfth paid holiday. Currently, Alamance County does not observe the holiday.

Alderman Monti Allison previously brought up the potential financial cost of the holiday and questioned if having a floating holiday would be better, so that town employees could choose personally significant days off instead of Juneteenth. Town Manager Rich Roedner drew up an estimate of the cost of a new holiday for the town, per Allison’s request during the Feb. 7 agenda session.

“Regardless, if you're working, you get paid. If you’re not here, you get paid,” Roedner said. “It's more of an opportunity cost, if you will, from economic terms, of the work that’s not happening.”

By Roedner’s estimate, the extra day of closure will cost the town around $10,500 in staff pay.

In defense of the holiday, Alderman Randy Orwig said that closing the office sends a better message and puts the town in line with the number of state holidays. Though town of Elon Mayor Emily Sharpe did not have a vote, she still showed support for the addition of the holiday as an acknowledgement of Elon’s historically Black community.

“This is a way for us to say to a historically Black community in the town of Elon that they're important to us,” Sharpe said. “I do like the idea of not having business as usual on a holiday that means so much.”

In another two unanimous votes, the board passed Land Development Ordinance #22-02, after some initial confusion as to what it entailed. The two part ordinance, intended to bring the town of Elon in line with state policy on land development, both updates the terminology used in Elon’s current land development policies and officially makes all offenses related to land development civil, rather than criminal.

A citizen lacking permits for proper development will now be punished by fines and civil suits, rather than criminal court as they would have been under the previous rules. The exception to this ordinance is that false testimony in a civil suit is still a criminal offense. Elon has not had issues with this in the past, but the recent state bill requires the legal language of the town be updated to match the new policy.

At the beginning of their meeting, the town of Elon Board of Aldermen unanimously passed their Consent Agenda — a short list of uncontroversial issues created at last week’s agenda meeting — including Rich Roedner’s appointment as interim finance officer and the retiring of police dog Spartacus with his former handler.

The next Board of Aldermen agenda session will be held March 7.