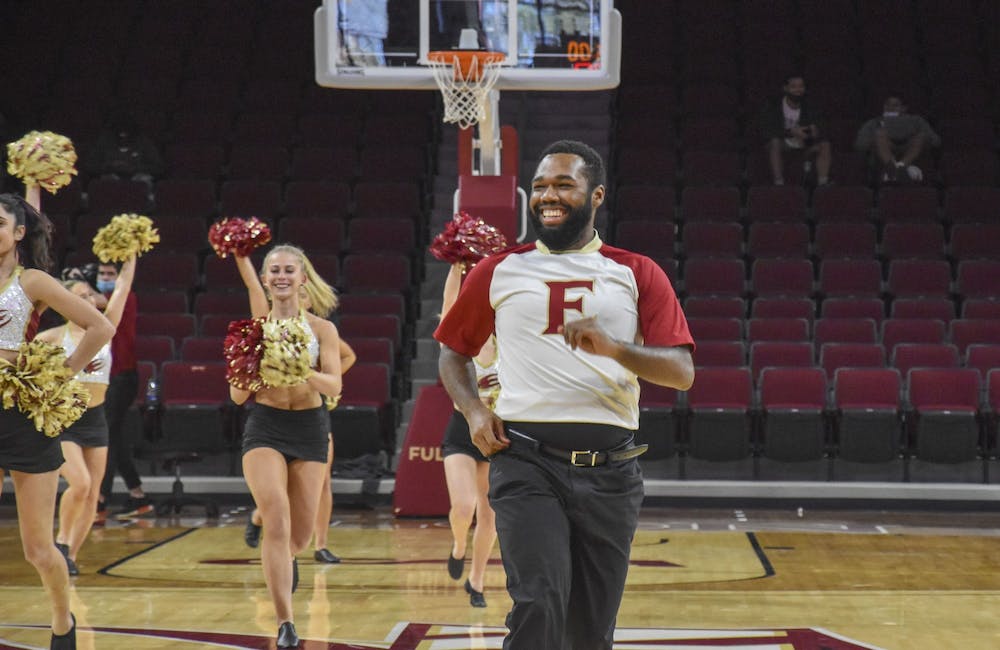 Photo by Katherine Martin | Elon News Network
Cullen Zeno, the only male dancer on Elon University's dance team, said he now calls himself a dancer with pride — a dream he long believed was out of reach that now serves as a creative outlet for introspection.

As the buzzer sounds and halftime begins, the Elon University Flames take the floor. But among the myriad of pompoms and ponytails, one individual stands out from the rest — Cullen Zeno.

As a child in Lafayette, Louisiana, Zeno realized his dreams of dancing at a young age when he began watching musicals. The attraction and awe, he said, was instant.

“I was watching a movie and there was dancing,” Zeno said. “I was like, ‘I need to do this. I need to dance in a movie.’”

Zeno’s obsession with dancing was evident to his parents, leading them to send him to J. Wallace James Elementary Arts & Technology Academy. He continued on to the path to stardom through middle and high school. In the sixth grade, he tried out for the dance team. As the only boy who auditioned, he said the rejection was devastating. It had a long lasting negative impact on his self confidence on and off the dance floor.

His dancing career was put on a pause, and Zeno turned to cheer. Throughout high school and most of college, he began to believe his dream of a dancing career would never become a reality. And when he enrolled in college at the University of Louisiana, he continued cheering.

The fantasies of being the performers he saw on screen at a young age lingered. On a whim, he decided to pursue a musical theater degree. After researching the top colleges for the theatre in the nation, he stumbled upon Elon University.

“Even in my first year and my sophomore year, I didn't classify myself as a dancer,” Zeno said.  “It wasn't until TikTok happened and I started making TikTok dances and getting good feedback that I kind of started to believe in myself. Junior year is when I was like, ‘That's what I'm going to do.’”

Zeno now has more than 5,000 followers, creating a variety of content including dance, singing and comedy videos that have generated over 200,000 likes. Since coming to Elon as a musical theater major, his passion for dance has grown enormously. Now as a senior, Zeno has big aspirations for the future. He hopes to pursue a Broadway career and let his dream live on in the big city.

Zeno said being a gay, Black dancer is hard, and he still struggles to find reassurance in himself and his abilities. He said though he has always felt safe in his identity and is proud of who he is, he struggles with being typecast in shows. But since coming to Elon in pursuit of his dreams of theater and dance, he has been embraced for who he is.

“Being part of the dance team has opened up a new climate where it doesn't feel as much as if, like, I should be scared for the way I am and what I look like,” Zeno said.

Zeno recognized fellow Flame Nyla Rivers as a source of inspiration and support. Rivers, the only other member of color, acknowledged Zeno’s effect on the team. She explained that he has acted as a sense of comfort and light to not only herself, but every other member.

“Cullen is realizing his talent and ability a little more,” Rivers said. “I think that adding this extra group of people to let him know how amazing he really is, has helped him come into that excellence.”

Zeno explained he has found a home on campus and friends he will keep for a lifetime. The bond between the team has increased dramatically, one he never experienced on any other team. Zeno thinks of joining as gaining acceptance, but also gaining 17 new sisters.

“I actually tell them all the time that I feel like they're my sisters,” Zeno said.  “I haven't really been part of a team where I felt that I was connected in that way with every single person.”

Prior to auditioning, Zeno was hesitant. He had concerns about how he would interact with and relate to a female dominated team. Zeno believes the stereotype that dance is a female sport causes men to disrespect the work of the athletes. He said the disregard is frustrating, but fortunately he has not fallen victim to ridicule. His initial worries were put at ease when he was quickly welcomed with open arms. Head coach Elly Dirks acknowledged Zeno’s move to join the team was bold, but a long time coming.

“We just see him as a teammate at the end of the day,” Dirks said, “I think that he started something that opened a lot of people's eyes. Anybody can try out for the dance team, and we accept everyone.”

Zeno said he views his decision to pursue his passion as providing closure to his younger self. He now calls himself a dancer with pride — a dream he long believed was out of reach that now serves as a creative outlet for introspection.

“Dance has allowed me to have a gateway to express how I feel when I can't speak it anymore,” Zeno said, “If I'm having a bad day or I'm really trying to get through something, I’ll just go dance. Dance is an escape from reality.”