As the Omicron variant of the coronavirus spreads, swings and understudies are relied on more than ever 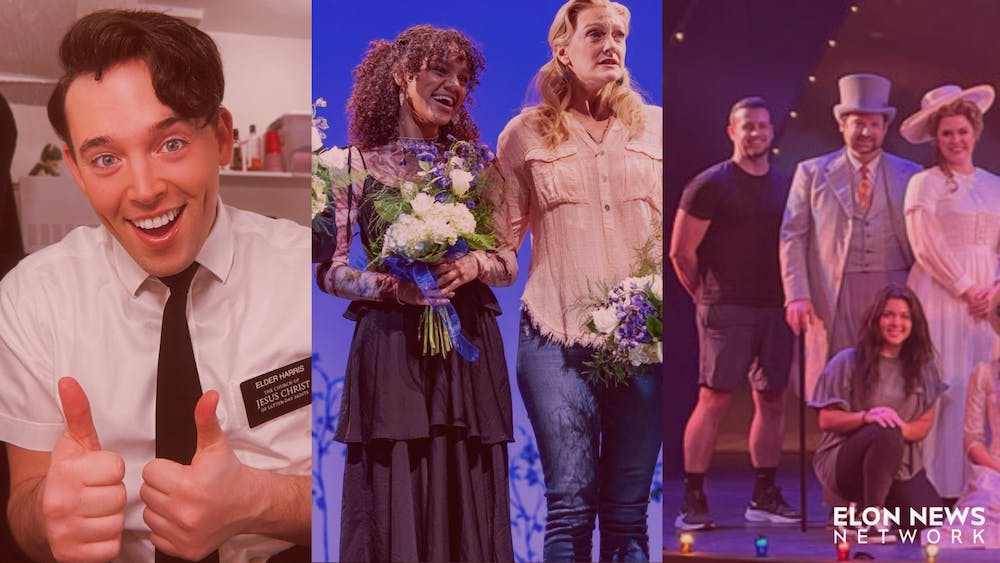 Photo by Ellis Chandler | Elon News Network
(From left to right) Elon music theatre alums JJ Niemann '17, Haile Ferrier '21 and Jacob Major '18 all work to cover roles in Broadway, touring and regional theatre productions. Swings and understudies are called on more than ever as the Omicron variant leads to breakthrough cases that leave cast members calling out sick.

The show must go on” is a common mantra in theatre, and the Omicron variant is proving that it wouldn’t be possible for the show to go on without swings, understudies and standbys. These performers cover the lead and ensemble tracks in a production and are becoming a new kind of essential worker within the realm of theatre.

The conversation surrounding the ‘heroes’ of theatre comes after president of the Broadway League, Charlotte St. Martin, questioned the level of experience understudies and swings have when asked why some shows were seeing more cancellations than others. Her response received negative pushback from many people in the arts and entertainment industry, and the original interview has since been updated to clarify her response.

Did you miss Elon Local News? Click below to see our segment on Elon theatre alumni.

Just over a week ago, Elon music theatre alumnus JJ Niemann ‘17 got the phone call to rejoin the Broadway cast of The Book of Mormon. On his first day back at work, he made his re-debut on stage as Elder Harris. That role is the same one he covered as a swing performer when made his Broadway debut in summer 2017 just days after graduating from Elon. After two and a half years away from performing, Niemann said was nervous to go on at first — and that his hands were shaking for the first two musical numbers of the show.

“All the nerves that I usually felt when I was doing a show for the first time kind of went away, which is good, and I kind of just trusted my knowledge and the dance captain who trained me,” Niemann said. “I had such a blast, it felt so in my body again, like it felt so familiar in a good way.”

As a swing performer, Niemann is an off-stage cover who is responsible for learning the entire show and seven ensemble tracks. He relearned the entire show in a week and said he kept all of his notes from when he performed before, but the most challenging part of it all was picking up on the nuances and changes to the show that weren’t in his old or new notes.

“I was really, pleasantly surprised that when I was relearning everything, my body just remembered all the choreography, my voice remembered the harmonies,” Niemann said. “Of course, there's little changes and tweaks, but I was like, that is so cool. Like, the human mind is just awesome.”

Performing in eight shows a week on Broadway is comparable to being a professional athlete to Niemann. He said that some shows are more challenging vocally, while others physically or emotionally. Between injuries and illnesses, Niemann is on stage almost every night filling in for various ensemble roles.

“It’s kind of fun to get to feel like you’re saving the day a little bit,” Niemann said.

Swings and understudies don’t often receive much notice before going on each night, or even much rehearsal time before making their on-stage debuts. Elon music theatre alumna Haile Ferrier ‘21 is an understudy in the Dear Evan Hansen national tour. She said she’s fortunate to receive scheduled rehearsal time in every new city, especially since this job is her first one since graduating last May. She feels prepared going on for both of the roles she understudies, but her notice for going on could be two hours before to even midway through the show.

As an understudy, Ferrier said she has a lot of responsibility, and taking care of her physical and mental health has become more of a priority since booking the role.

“All of the cancellations have just reminded me that, ‘oh, I am like the backbone of this show if anything happens,’” Ferrier said. “So it's definitely a big responsibility, but I'm thankful for it.”

The cancellation of shows is happening in regional theatre as well. Elon music theatre alumnus Jacob Major ‘18 has been working as a swing in a production of Carousel for the last six weeks, but the show closed its run less than a week in due to COVID-19-related reasons.

“It's been a flurry of figuring out, ‘Alright, when do we leave now? How does this affect our future plans for the next rest of the month?’” Major said.

Major covered 12 tracks in his production and said he loves the variety that comes with the job. He said performing as a swing now is similar to what he did during his time at Elon because he would usually be cast in the ensemble and he was versatile because of his wide vocal range.

“I like just being able to wake up every day and be like, ‘whew, there's a possibility, a fresh possibility that something could happen and my services will be needed in a fresh, new way than they were yesterday,’” Major said.

Even though the production didn’t get to run its full course, Major said this was the first time that the theatre he was working for had hired swings. He said it was a “big move” for them, but hiring more swings should become a more common practice because the job was just as difficult before the pandemic. While swings and understudies do help cover performers who call out of a show, only so many people can be out before the show has to cancel a performance.

“If COVID-19 had started to kind of cycle through the company, you have one guy and one girl out of the show, you could do the show, but if you have any more, like, how are you going to?” Major said.

Major said there’s also a lack of courses and training opportunities for performers to learn to swing, so they become scared because they’ve never done it. He thinks creating an environment where it’s safe to learn how to swing and make mistakes while doing so, along with hiring more swings, could be a possible solution to performance cancellations. Major added that the inconsistencies with cancellations may frustrate those buying tickets in the long-run.

Most swings and understudies also get their start and learn how to cover tracks on national tours before making it to the Broadway stage. Ferrier said that some people get disappointed when they arrive at shows and see that an understudy or swing is in, but doing so is actually an honor.

“You're seeing people that you don't even know what they'll do in five years. You don't know, they could be the lead on Broadway, and you'll be able to say, ‘Hey, I saw her do this and now she's doing this,’” Ferrier said. “You never know what those people are going to do and I would just be thankful for having the opportunity to see them bring a different life to a role.”