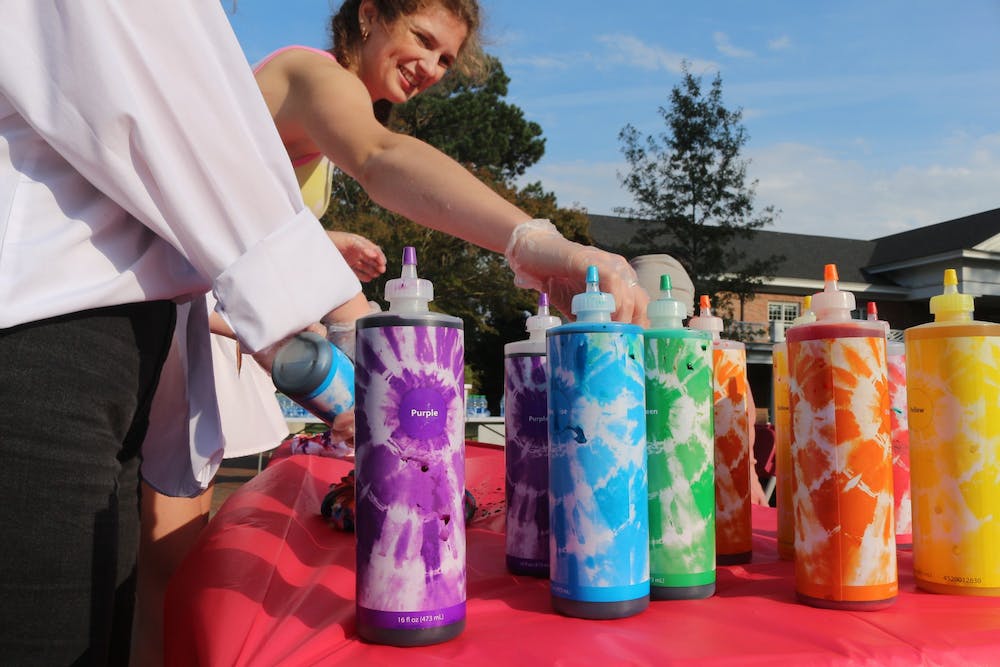 Photo by Alexa Morrissey | Elon News Network
Students tie-dye shirts at Pride Fest on Oct. 22. Pride fest was an event hosted by Spectrum in order to connect members of the LGBTQIA+ community.

When junior Lucas Leveillee attended his first Spectrum meeting, he wasn’t sure what to expect. Coming from a high school that lacked a similar space, Leveillee found a safe space in Elon’s queer-straight student alliance club: Spectrum. To Leveillee, Spectrum was the first place he found for individuals who support equality and fairness for members of the LGBTQIA+ community.

Existing for over 20 years on Elon’s campus, Leveillee said Spectrum provides a welcoming and engaging atmosphere for students to feel “at home.” Personally, Spectrum allowed him to become more comfortable with his identity and self-expression. Now, as the organization’s president, Leveillee wants other students to be able to experience that as well.

“Our goal is mainly to create a really casual space that students can now participate in and spread the word so that they know that they are accepted,” Leveillee said.

Creating a safe place for all people to come together and support one another remains a common theme throughout Elon’s campus, Leveillee said, and that is exactly what organizations like Spectrum hope to do.

“I feel more comfortable just being who I am in general because of Spectrum, especially when looking back at the beginning of my freshman year when I was still kind of closeted,” Leveillee said.

Leveillee also hopes the organization will continue this work and showcase the broad range of identities existing on campus.

According to Leveillee, Spectrum brings people together in a profound way. During meetings, individuals and allies are encouraged to participate in conversations surrounding issues within the LGBTQIA+ community in an effort to educate and spread awareness.

Like Leveillee, other individuals in Spectrum meetings expressed that they too did not have a safe community prior to coming to college, and some may still not feel accepted today.

In an effort to promote inclusivity and awareness, Spectrum hosts events like “Dragstravaganza,” where LGBTQIA+ individuals and allies celebrated drag culture by singing, dancing and immersing themselves in a drag show environment.

The success of the “Dragstravaganza” event prompted Leveillee and other Spectrum members to host another “Dragstravaganza” in the Spring. The date and venue for the event are to be determined and announced in the next couple of weeks, said Leveillee.

Most recently, Spectrum hosted their annual Pride Fest on Oct. 22, where people tie-dyed shirts and played games. Freshman Ashley Josey, who attended the event, said she had “a great time connecting with such a wonderful community of authentic and accepting people.”

“Events like this have really helped me cultivate a sense of belonging on campus, and that’s something I’m incredibly grateful for,” Josey said.

According to Leveillee, Spectrum highlights that people need to know how to be respectful of everyone, regardless of their background. Engaging with diverse perspectives and identities is “a crucial first step to becoming a more global citizen and a more well rounded person in general,” said Leveillee.

Spectrum works in tandem with Elon’s Gender and LGBTQIA+ Center. GLC’s graduate apprentice Jamie Wire serves as the direct liaison between the two entities. Wire said the GLC and Spectrum continue to stay active on social media and both are thrilled to be able to host more in-person events this semester.

“Spectrum runs their own newsletter, their own GroupMe and their own Instagram,” Wire said.

Wire said the GLC and Spectrum have a positive and collaborative relationship with one another, and both strive to make sure students feel validated across all areas of campus. The GLC and Spectrum’s main mission is to ensure support and acceptance.

For Wire and Leveillee, creating a positive atmosphere within Spectrum and the GLC for all students to collaborate, listen and grow together is imperative to Elon’s core values.

“It is good to know that you have people that you can talk to on campus, and that you can recognize those people on campus as well,” Leveillee said.