Wildcats shut out the Phoenix on Homecoming weekend

The Villanova Wildcats went unanswered for four straight quarters, resulting in a blowout against the Phoenix 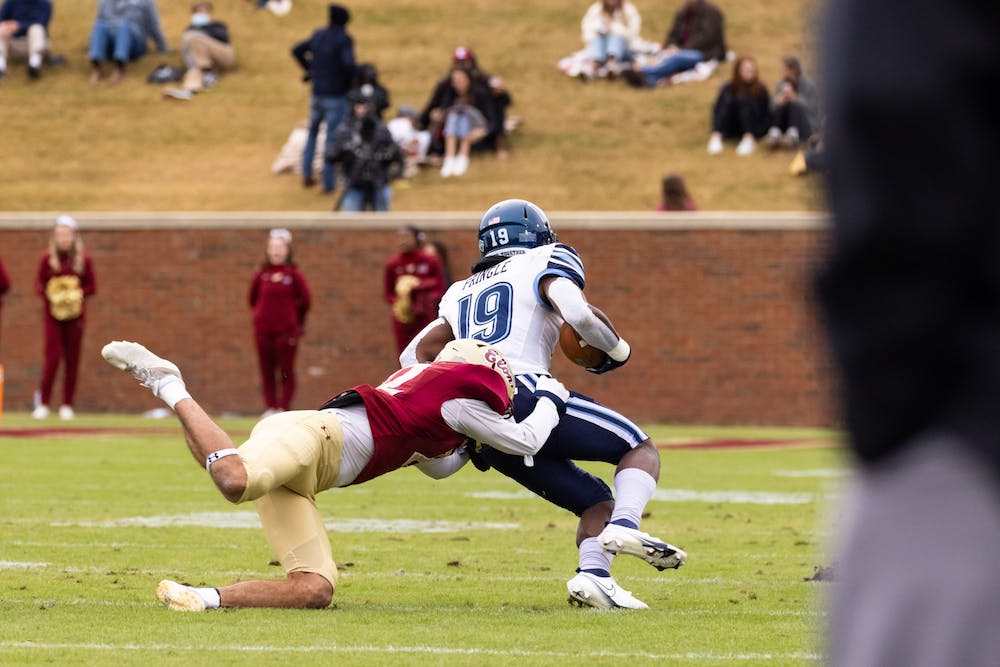 The Elon Phoenix fell to the Villanova University Wildcats 35-0 in the 2021 Homecoming Weekend game. The #13 team in the Football Championship Subdivision proved to overpower Elon on offense and on defense, never allowing the Phoenix to find its rhythm.

“A lot of credit goes to Villanova, they dominated the football game, they played suffocating defense, they took advantage of some takeaways, they were opportunistic,” head coach Tony Trisciani said. “We just really couldn’t get it going today.”

An entirely unproductive first half allowed for just three touchdowns against the Phoenix, though the outcome could have been much worse. The game opened with quick work being made of the Villanova offense by the Elon defense. However, when senior quarterback Davis Cheek took the field, the ball went right back to the Wildcats on his first throw.

Things did not improve after that. The Villanova offense would come back onto the field after a short offensive showing from the Elon offense. The Phoenix defense shut them down once again, but the punt return was dropped and recovered by Villanova special teams. In three short, fast paced minutes, the Wildcat offense were on the field twice, capitalizing on the second drive. Cheek praised the defense for holding their own when his offense continued to come up short.

“To have three drives and only give up seven points after two turnovers, that’s pretty tough to do,” Cheek said. The defense was also able to keep the offense to just two touchdowns in the second half.

For junior running back Jaylan Thomas, he recorded just five rushing yards for the entire game, his lowest of the season. He said that Elon’s offense struggled to find momentum against the sixth ranked Villanova defense.

Trisciani said that the team will be back to work tomorrow to work out what the mishaps were from today’s game, and will make the corrections to apply to next week’s game against Towson University.

“This hurts,” Trisciani said. “We’ll make sure that we have our goals lined up for the week in practice, we’ll practice with a purpose, and prepare for next week to be 1-0 next week against Towson, you know, it’s the only thing we know to do.”

The Phoenix will travel to Maryland this Saturday for its final away game of the season.

Check out photos from Homecoming 2021 below: