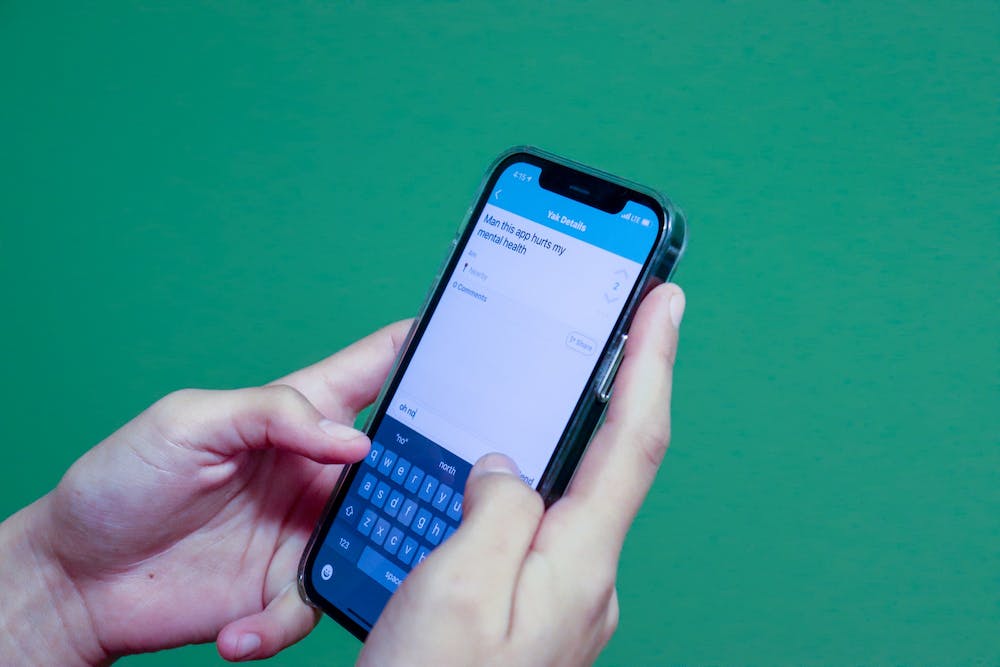 Photo by Laney Daniels | Elon News Network
Scrolling through the newly reintroduced app, Yik Yak, one can see a multitude of relatable posts, or “yaks,” as they’re known to users.

Scrolling through the newly reintroduced app, Yik Yak, one can see a multitude of relatable posts, or “yaks,” as they’re known to users. Posts range from comments on the dining halls, to how they are spending the weekend, to calling out loud neighbors. But some content posted involves harsh comments on people’s appearance, what organization they are affiliated with, and spreading rumors that can damage a person’s reputation on campus.

In light of controversial posts on the anonymous social media app, there are concerns on how it is affecting student mental health. Social media experts, students and psychologists comment on how they think Yik Yak is affecting campus.

Some of the negative posts found on Yik Yak include bullying, hate speech and street harassment. These posts, when read, can affect multiple users on the app causing many to have negative mental health repercussions.

Zlock said that the anonymity of the posts on Yik Yak causes a problem for the university to effectively respond to the comments. Zlock adds that there are systems in place at the university where those comments can be anonymously reported and be better handled — especially when there is name-dropping involved.

“I think everybody just needs to keep in mind that when you're posting somebody's name or otherwise identifying somebody, that it's a real human being,” Zlock said.

Sophomore Lily Castraberti said that social media has affected her mental health, specifically pointing to the platform as a facilitator of negativity.

“Yik Yak in particular, because it's centered around Elon, makes it more negative,” Castraberti said. “I just think that having it on my phone just made me kind of addicted to it.”

Katrina Jongman-Sereno, professor of psychology, said that although mental health of the user is studied in institutions, there are some psychological and mental health consequences that we don’t see.

Jongman-Sereno said there are both positive and negative sides to social media. On the positive side, it can increase belonging. However, on the negative side, it encourages social comparison, self doubt and imposter syndrome. By posting negative comments, there could be a myriad of reasons for why one would do that. However, what one would see as a cathartic way to get a thought out, could be more harmful than beneficial.

“The research has shown that catharsis can often backfire,” Jongman-Sereno said. “And instead of it being a relief, it actually just makes you more likely to do that behavior again, so that people who are using these anonymous apps to post negative information might actually be just facilitating that in the future.”

Castraberti said that some of the negative comments she has seen involve organizations on campus.

“Obviously, you're not going to believe everything you read online,” Castraberti said. “And most of these things are fake or just made to like, up vote, or whatever, to make them seem more popular.”

“Social media kind of hijacks existing psychological mechanisms and experiences,” Salomon said. “It's not that it's creating a whole new human experience, it's that it's basically an optimized way for us to engage.”

In Jongman-Sereno’s research, it was shown that people are biased to see a connection between authenticity and positive behaviors. This means people are more likely to say that the positive things that they do are truly representative of themselves and distance themselves from the negative behavior they present. This can cause deindividuation, where anonymity is present, people are more reckless in their actions.

“We don't say everything that's on our mind or we tailor the things that we're saying when we realize that there's an audience,” Jongman-Sereno said. “But when we feel anonymous, it kind of takes away that filter. And so people act a lot more aggressively and say things that they wouldn't normally say if their identity was salient. And so that can lead to a lot more antisocial and harmful behaviors.”

Jongman-Sereno said that a cause for people to post comments that may be more personal could be due to the fact that there isn’t a platform set up for them to speak up or that it is not in their best interest to use the existing platform to speak up.

“I think that part of the reason why students turn to apps like Yik Yak … is because they don't necessarily have trust in the systems that currently exist,” Jongman-Sereno said. “It is giving students an outlet to post certain information that might not come out otherwise. But at the same time, there's been no process in place to help those students or to reach out to those students”

Salomon said that there are a lot of different intentions for why people anonymously post. However, when a post goes too far, it can lead to severe repercussions.

“It can be a pretty daunting consequence of making a claim against someone else, or claiming that someone did something, whether they did or not,” Salomon said. “Putting that information out there can have social consequences and legal consequences, potentially.”

Castraberti gave very clear advice to other social media users in regard to Yik Yak.

“I would say don't download it, just because there are a lot of false stories and false negative things that go on it,” Castraberti said. “A lot of rumors get started that way about certain people and it can really hurt someone's reputation.”