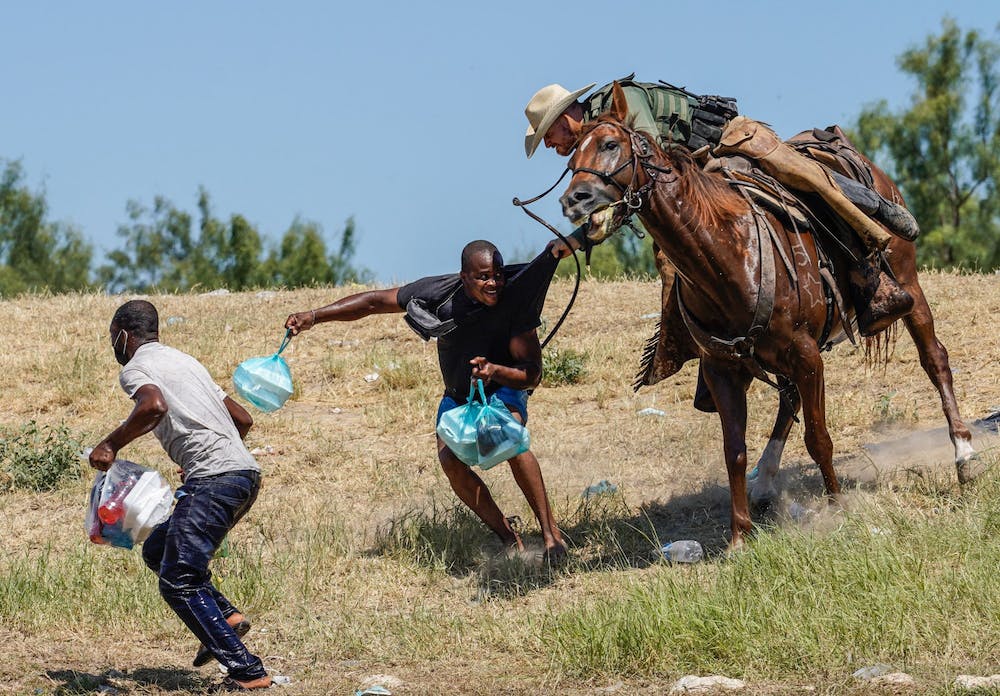 A U.S. Border Patrol agent on horseback tries to stop a Haitian migrant from entering an encampment on the banks of the Rio Grande near the Acuna Del Rio International Bridge in Del Rio, Texas on Sunday, Sept. 19, 2021. (Paul Ratje/AFP/Getty Images/TNS)

Thousands of Haitians at the U.S.-Mexico border are seeking refuge and asylum in the United States. After the Biden administration reversed the Trump administration’s immigration policies that limited asylum and made it more difficult for migrants to receive green cards or get naturalized,  many Haitians are leaving their country. Individuals are also leaving Haiti after facing numerous years of political instability and natural disasters, according to The New York Times.

Sandy Marshall, professor of geography who has taught a class at Elon focused on the U.S.-Mexico border, discusses why there has been a surge of Haitian migrants at the border and the international community’s response to this influx of migrants.

What is currently happening at the U.S.-Mexico border?

“My understanding is that we’ve got a new kind of migration issue developing with Haitian asylum seekers, seeking asylum again through travel not directly from Haiti to the U.S. where they would be more likely to be turned away in the water but through Mexico [where they] are attempting to enter the U.S. that way.

Many of those asylum seekers, they’re fleeing the instability from Haiti with the recent political assassinations and turmoil there and have basically started to group in asylum-seeker camps, in which the situation is very dire. I’m hearing a lot of reports from the ground there of just really poor conditions for asylum seekers.”

Why are so many Haitian migrants coming to the U.S.-Mexico border specifically?

“The U.S. has had a long history of involvement in Haiti, basically going back to its revolution and its independence as the first independent nation in the Western Hemisphere to get its independence through a slave revolt. But, it nevertheless have continued kind of coil presence from both Europe and in the U.S., and the U.S. has long had a lot of influence in the government there.

We’re intimately and closely tied with the government of Haiti there … So, people are fleeing that situation and they’re turning to the U.S.-Mexico border, which is what allowed them probably a greater chance of having their asylum claims heard if they can make it onto the land border.”

What exactly is the Biden administration doing to respond to the surge of Haitian migrants at the U.S.-Mexico border, and how has the international community responded?

“When the Biden administration came in, there were a lot of immigration advocates and asylum seeker advocates who were calling for basically a surge of lawyers to the border. There was an asylum seeker crisis at the border, even before this latest crisis, and we just needed more people to listen to their claims and help process the claims of asylum seekers, people violence and instability, that really didn’t materialize.

… My understanding … is that the conditions are very, very poor for asylum seekers right now and that the Biden administration is not doing enough, and they’re moving too slowly to address this very pressing human need.”

How have conditions migrants at the border are facing impacted conversations surrounding human rights and immigration within the international community?

“I think for a lot of observers in the international community, human rights observers, those who advocate for refugees and asylum seekers, it’s been a huge disappointment. I think in terms of a hope for a more humane border policy, what they’re seeing right now on the border is not reflective of many people’s hopes for the new administration. Again, we will see how the administration responds, but I would say there’s a lot of horror and disappointment among human rights observers on the border.”

I know you previously said you had visited the border a couple of years ago. Could you explain what some of your experiences were like there and how that has impacted your viewing of the current situation at the U.S.-Mexico border?

“I think we tend to think of the border in abstract terms. We think of walls and we hear numbers of this many thousand people trying to enter the border or this many dozens or hundreds of people being harmed or dying in the desert over the years. It’s very easy just to think about in the abstract terms.

When you visit an asylum shelter or you witness a deportation trial or an asylum trial, you realize the very real human tragedies that are unfolding for many people. The hopes, the desperation they have to enter this country, and you begin to understand this is a very human issue that needs a humane response.

I understand the need to respond to asylum crises like this through the legal frameworks, but we have to remember that the U.S. is a signatory to the international treaty on migration which requires us to allow asylum seekers into our country and to have their cases heard. We do have an obligation there.”

Going forward, how will all of this affect U.S. foreign policy and diplomacy efforts internationally?

“The fact of the matter is that many asylum seekers are coming from countries where there’s political, economic instability. There’s a lot of violence and crime, and part of that is because of U.S. policy throughout the Cold War in which we backed dictatorships [and] backed right-wing groups.

We basically helped to destabilize and traumatize many of those societies and a generation or so since then people are seeking to leave those violent areas to come to our country… They have a right to do so, to claim asylum here if they can demonstrate the claim.

We have an obligation to allow asylum for folks who are fleeing violence, but I think no one wants to have to leave their country out of fear of violence. And, I think we do have an obligation to help with the economic and political stability of those countries. So, that should be where diplomatic focus is, but again, that’s been slow to materialize.”

And, why do you feel it’s been so slow to materialize?

“There’s clearly a lot on the new administration’s plate in terms of COVID-19, and there’s certainly no shortage of crises right now. I think it’s just a matter of where the attention is being directed, but I would hope with the current influx this would prompt the administration to take a more serious look at what’s happening in the Caribbean or in Central America and how we can prevent crises like this rather than just respond to them.”

How can what’s happening at the U.S.-Mexico border connect with community members in Alamance County?

“I think we should care about this issue on a human level in terms of any time when there are people fleeing violence and instability and seeking safety and security in our country, that requires a thoughtful response. We have a large Latinx, Hispanic-Caribbean community in the general region, in Greensboro and nearby.

We have to remember that folks may have connections to many of these countries, personal connections, and we need to better understand the situations that migrants are fleeing from because the U.S. has had such a historic role in producing that instability. So, I think we can’t just respond to what’s happening right now. We have to explore the deeper roots of this crisis.”