Lambert and Felten spoke to Elon University alumni, students, faculty and staff on Oct. 21, urging the Elon community to think about power of relationships 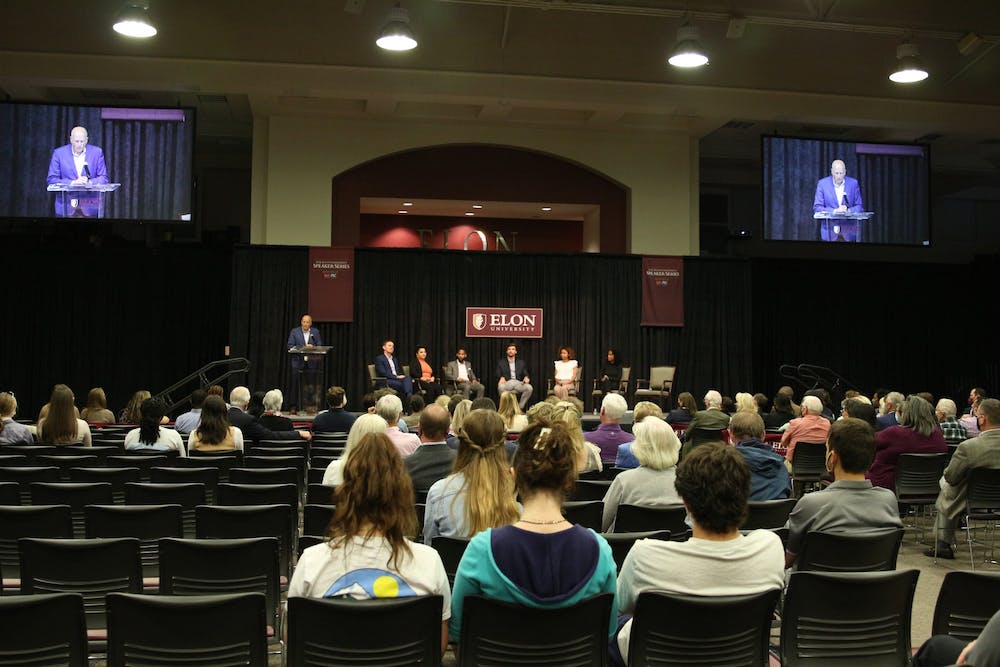 President Emeritus of Elon University Leo Lambert and Peter Felten, assistant provost and executive director for the Center of Engaged Learning, spoke to alumni, students, faculty and staff on Thursday Oct. 21. The event was part of the university’s speaker series and focused on addressing the power of relationships, the subject of the book written by both Lambert and Felten.

“All of us should be raising our consciousness to think about ways to develop relationships with each other and to support one another,” Lambert said in an interview with Elon News Network.

Lambert and Felten authored a book last year entitled Relationship-Rich Education: How Human Connections Drive Success in College. The book aimed to explore how personal connections arise in the current generations of college students, and sought to question why more institutions aren’t including emphasis on those relationships in their curricula.

“Higher education needs to do a better job of explaining to students that one of the most significant outcomes of college is that you develop a constellation of mentors and relationships — peers, faculty and staff — people that are going to support you and guide you towards your future success,” Lambert said.

The book is a culmination of hundreds of surveys and interviews conducted with college graduates about how human connections impact academic success. Lambert and Felten interviewed about 400 individuals on 25 college campuses throughout the country.

Lambert said he and Felten focused on gathering research and conducting interviews at several  postsecondary educational institutions that varied greatly from one another and were representative of the two year and four year American higher education system. Colleges and universities examined in the book included University of Michigan, City University of New York, Florida International University and Nevada State College, according to Lambert.

A key finding in Lambert and Felten’s research was that students on college campuses were appreciative when someone, such as a faculty, staff, or another community member, stopped by them to say “hello” and “how are you,” and to listen to the student’s responses with generosity and intentionality. Lambert said that is something that he wishes to see on more college campuses.

While Lambert and Felten concentrated on relationships in higher education on a national level, they also investigated what mentorship looked like at Elon University. Lambert said many mentorships and relationships between students and faculty and staff members first develop within the classroom.

“When you think about the classes that you’re taking, there are four or five opportunities each semester to begin a significant relationship with a professor,” Lambert said. “Classrooms that are engaging and active and vibrant are just really fertile ground for relationship building.”

Lambert said he also noticed nearly everyone, not just professors, on campus, engaged with students to support and guide them. When Lambert talked with a bus driver who works with Elon Express, he said the bus driver explained how students treated the bus as a safe space to share their joys, worries and concerns and would even talk with the bus driver for guidance.

“That’s the kind of culture I think we want to keep at Elon, where every single person that works here is here for students,” Lambert said.

During the event, there was also a panel discussion with alumni who reflected on how their relationships with students, faculty and staff at Elon affected their post-graduation careers. Three of the panelists who spoke during the event were Mirella Cisneros ‘19, James Donnell ‘19 and Natalie Green ‘21.

Cisneros is a 7th grade math teacher in Durham and community impact manager at LatinxEd. Cisneros said being a first-generation college student, coming from a low income family and having DACA status caused her to experience struggles during her time in college. Building relationships with her peers and finding staff mentors, such as Sylvia Muñoz, allowed her to overcome her struggles.

“My peer relationships is what really changed my experience,” Cisneros said. “When I finally found people that I felt like I could connect with, and even if they didn’t have the same stories, they made me feel comfortable sharing who I was.”

Donnell is a juris doctor pursuant at Elon University School of Law and legal intern at Arch Mortgage Insurance Company.

Donnell said Marcus Elliot, director of the Odyssey Scholars program, made a large impact on him during his time at Elon and so did Gerald Walden, a practicing attorney in the Greensboro-Burlington area. Donnell said having relationships that were intentional and ongoing have helped him throughout his career endeavours.

Green is a T. Howard Scholar and former CNN Digital Advertising Sales Intern at WarnerMedia and current client coordinator at The New York Times. She said getting involved with the Center for Race, Ethnicity and Diversity and the Black Student Union during her time at Elon allowed her to cultivate meaningful relationships with fellow students and faculty members around her.

“Dean Ford has been there to push me along, give me that guidance, give me that support I need, especially as a Black woman myself” Green said. “It has been inspirational to see her leadership here on campus and how she transforms the School of Communications.

Haley Phelps and Carter Craig contributed to the reporting of this article.