Pedro Rabadan prepares for his first year of normalcy

The Madrid native continues to grow despite adversity 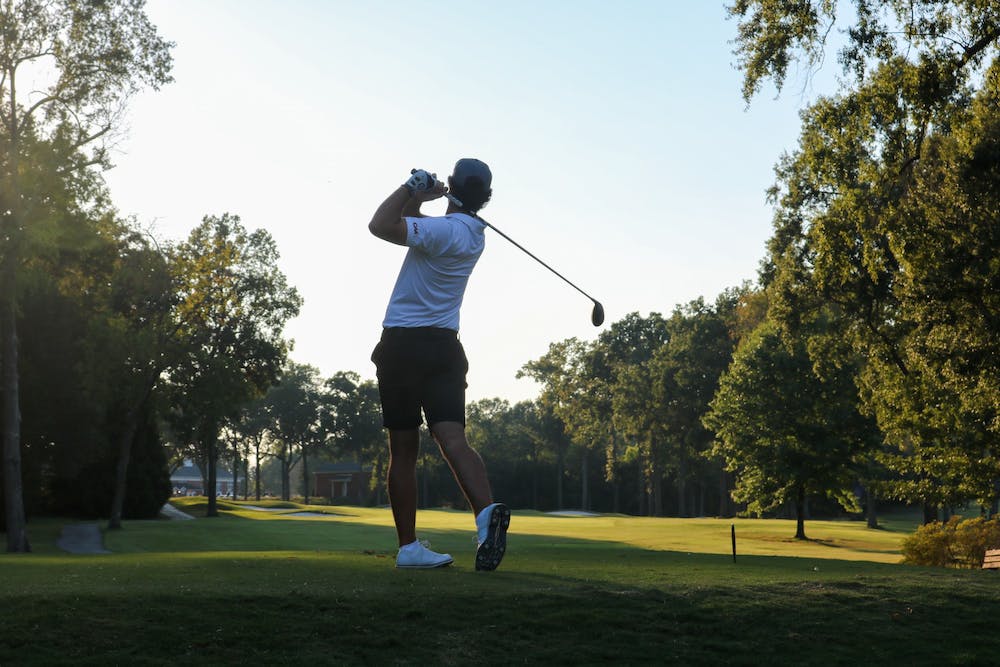 Sophomore Pedro Rabadan swings his golf club during practice. Rabadan moved from Madrid, Spain to the United States to experience life as a Division I student athlete on the Elon Men’s Golf team.

As the only international student on Elon University’s men’s golf team last year, sophomore Pedro Rabadan moved almost 4,000 miles across the world, having to adjust to both American culture as well as life during the COVID-19 pandemic. Without a fall season to help him adjust, Rabadan, like the rest of athletics, was left at a standstill, unsure if there would be a golf season at all.

Rabadan said that he had been to the United States a few times, but going to college was his first trip away from home for a long period of time.

Rabadan came to Elon with a successful junior career backing him. Ranked the number two player in Madrid and seventh under-18 player in all of Spain, he caught the attention of men’s golf head coach Don Hill through social media.

“The internet is a pretty amazing thing,” Hill said. “There are so many different junior golf organizations that run high level tournaments. You're starting to see more and more international players come over and play events in the summer in the states, it might be for a month where they get three events in four weeks or something like that.”

When deciding to play at Elon, Rabadan said he knew what to expect as the only international player on the team for his freshman season. He said that the biggest adjustment he had to make was with his classwork.

“Obviously I would watch movies and all that in English, but getting used to reading in English was a little different because I felt like I had to focus a little more.”

“I would like for our program to match the footprint of the university, with North Carolina kids, South Carolina kids, Virginia, kids from Connecticut, Boston or Spain,” Hill said. “We don't really care where they're from, and if we manage the footprint great, if not, that's fine too. But, that’s been our plan for some time now.”

The team’s spring season proved to be a successful rookie outing for Rabadan. He ranked third of the nine on the team, averaging a score of 75.27. In the Colonial Athletic Association tournament, he tied for 17th with fellow Phoenix redshirt senior William Frodigh, with six over 222.

Hill said that Rabadan has been steadily improving since stepping foot on Elon’s campus, and that he hopes for the growth to continue.

“You want him to have self belief, self confidence, that can buoy you in many ways, it's just believing in what you do and how hard you're working,” Hill said. “His work ethic is really second to none. He really cares a lot about his craft, he works hard on the mechanical parts of his golf swing, putting stroke, short game, all of those things.”

Rabadan said that although he is used to being one of the only international students on the team, it can become the center of attention when it comes to friendly teammate rivalries.

“We're like family, we like to be together just, hang out like watch TV,” Rabadan said. “Last week, we had the Ryder Cup, which everyone here is from America and I’m from Europe, so Europe lost so they were just getting all over me but it's fine. It's fun, it's fun to hang out with them.”

Rabadan said that there are still some things he has to get used to, but that he is excited for the year to come.

“The time it is here and the time it is at home, right now I get done with playing and I can't call my parents because they're asleep. But at home, I would be able to do that,” Rabadan said. “Right now I'm just excited to play golf. I'm happy we can be here, we have a great team, and I'm happy for that.”

Rabadan will be back on the golf course at Elon’s home opener, the Phoenix Invitational, at Alamance Country Club in Burlington. The tournament will take place over two days, Oct. 11 and 12.