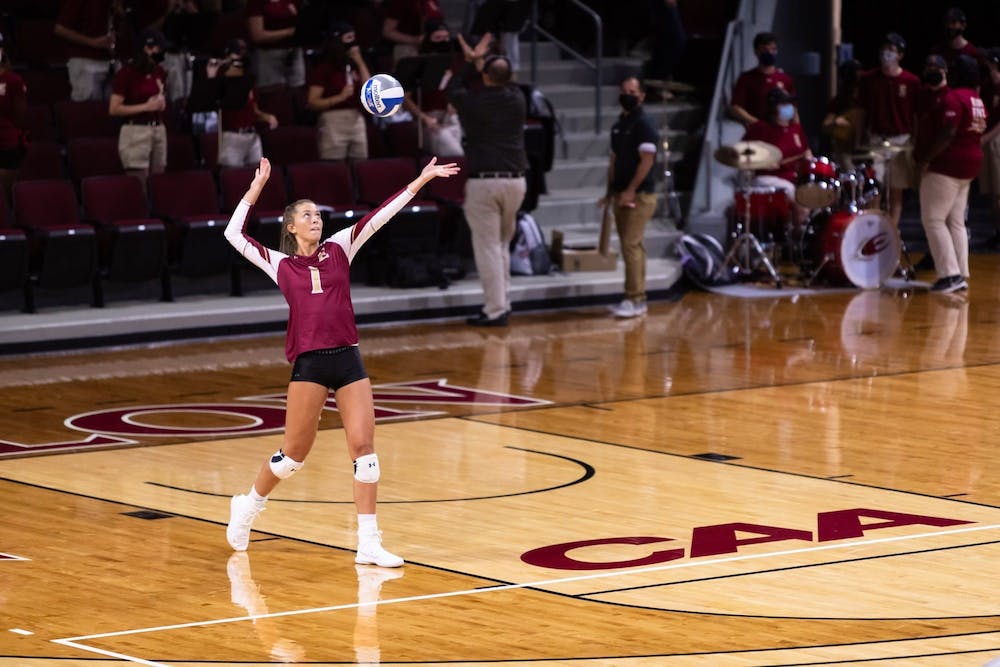 Photo by Lucas Casel | Elon News Network
Senior Leah Daniel starts off the third match against University of North Carolina at Asheville this year. The All-American volleyball player has agreements with Barstool Sports and Liquid I.V.

When student athletes across America returned to school for a new season this year, a new interim policy was put into place. Finalizing that policy, the NCAA declared that college student-athletes could finally profit off of their name, image and likeness.

Before this policy was developed, athletes cited the Sherman Antitrust Act — a federal statute prohibiting activities that restrict interstate commerce and competition in the marketplace —  when defending their right to profit off of their marketability. Now, athletes signed to schools nationwide have that chance.

Taking that chance at Elon, senior Leah Daniel has already taken advantage of NIL opportunities. The All-American volleyball player has agreements with Barstool Sports and Liquid I.V. — an electrolyte drink mix. In an email sent to Elon News Network, Daniel said that she wanted to make a deal with Liquid I.V. because of how much she already used the product, and her agreement with Barstool is for beneficial experiences.

Daniel said that the benefits college athletes can receive give them a chance to get their names out to sponsors. However, finding sponsorships and finalizing agreements is not always the easiest, especially for some student athletes at Elon.

“It is harder with being a smaller school to get deals with bigger companies that are reaching out to more popular athletes or D1 programs,” Daniel wrote.

Though connections are hard to make in the sports world for athletes at smaller, private schools Daniel wrote that she is still grateful for the opportunities she has received.

Overseeing NIL work with Elon athletics, Jeffrey Scheible said Elon’s policy follows suit of the policies higher placed — individual states can create their own policies, followed by conferences, then by individual schools. Scheible serves as the associate athletic director for compliance and administration, where he saw the changes that occured in athletics when the NCAA announced its NIL policy.

“We’re an Under Armour school. If somebody wanted to do a contract with a competing brand, we might say, ‘yeah, you can do that commercial, but not while wearing Elon uniform or gear or on our facilities,’” Scheible said.

Scheible said that over 50 Elon athletes have made some type of NIL agreement, with almost every team represented in that number. He said that though there is a wide variety of companies who have made sponsorship agreements with Elon athletes, the majority of them are internet companies that are already familiar with how to efficiently use social media, like Barstool Sports.

“NIL success is all about marketability. A student-athlete has to provide a platform that a sponsor finds attractive. For example, a strong social media following is generally the biggest draw for an endorsement deal,” Scheible said. “Student-athletes who want to succeed at NIL need to learn how to build and manage a brand, along with enhancing their own professional skills, such as financial literacy, time management, understanding taxes, etc.”

Though Elon athletics is not allowed to be involved in athlete’s dealings with NIL agreements, the athletic department has created workshops that athletes can attend to improve their brand. Scheible said that this idea was put into practice even before NIL was finalized, to prepare student athletes for life after college.

Despite the advantages for Elon athletes and athletes across the country who are making NIL agreements, some are still questioning if NIL will be beneficial for schools’ athletics programs, specifically smaller ones, in the long run.

Left to the details

When the NCAA established its interim NIL policy, it did so under fire. California had prohibited schools from punishing athletes who accepted endorsements while at college in September 2019. But in June 2020, the Supreme Court ruled that the NCAA did not get special antitrust treatment because of its academic mission. And just over a year later in June 2021, the NCAA Board of Directors instructed schools to start creating their own policies for what should be allowed with as few restrictions as possible. The interim NIL policy was established in July 2021.

But even when the policy was written, it was considered soft and loose.

Assistant Professor of Sport Management Bill Squadron said that when the NCAA first met to create it’s NIL policy, there were many questions regarding the specifics of the policy. Instead of providing clarity on those questions, the NCAA “ chose not to adopt a detailed policy.”

“They were getting all kinds of input, that they were going to be challenged legally, no matter what they did,” Squadron said. “They should have been bold and confident that they could establish rules and defend them, because this is an area that really required it.”

One interpretation of the rules the NCAA did not expect: top-ranked high school athletes graduating early to establish NIL agreements sooner. An example of this is Quinn Ewers, a student athlete who intended to graduate Carroll Senior High School in Southlake, Texas with the rest of his class. A top prospect quarterback, Ewers decided to graduate early and enroll in Ohio State instead of seeing out his senior year of high school. ESPN later reported that Ewers signed a deal with GT Sports Marketing for $1.4 million

“I think the whole high school piece of this is very much up in the air and potentially really tumultuous for the top recruited athletes,” Squadron said.

Though there are valid concerns connected to high school athletes' involvement with NIL, Squadron suggested a positive to the policy. In the past, college student-athletes were able to have chosen to graduate early and enter their sports’ draft. When it was not possible for student-athletes to make money playing their sport, it was an easy decision to decide to try their hands at making it professionally. Now, Squadron thinks that decision might become a little harder.

“It’s going to keep top athletes going to college as opposed to maybe looking for other ways to get to the pros immediately because they're going to start to earn money in college,” Squadron said. “Some people even said, ‘Well, if Zion Williamson could earn money at Duke, maybe he would have stayed at Duke because he really liked it there.’”

Hugh M. Cummings High School sophomore Jonathan Paylor is already in communication with schools such as University of Georgia, LSU and Michigan State. The top-ranked recruit in North Carolina and eighth in the country, Paylor will be in a position to establish NIL agreements when he chooses which school to commit to.

“NIL is just kind of a big step for me just to know that things are appreciated,” Paylor said.

Similar to Elon workshops dealing with improving athletes’ brands, Paylor said that there are now high school programs that work to educate high school student athletes on what to expect when offered an NIL agreement.

With high school athletes now roped into the NIL merry-go-round, another challenge appears: how this will impact recruitment.

“Coaches and athletic directors are seeing this as a critical tool in attracting students to their campus, and honestly, in my personal opinion, I think this is terrible,” Squadron said. “I think it will create an arms race. Whether it's a small school or a large school, there's going to be a lot of pressure to build a kind of a NIL ecosystem that you can then tell your recruits that they can take advantage of if they come to your school.”

For higher profile athletic schools like The Ohio State University or The University of Tennessee, Squadron said that because of their booster and alumni programs, they should be able to provide NIL opportunities that smaller schools can’t offer. Squadron also said this will pressure smaller schools to reach out to local businesses, sponsors and boosters to help create answers for how to compete with athletic programs with more money at their disposal.

According to Scheible, Elon is already in a good spot to create some of those answers.

“Not every prospect is going to be recruited by a power five school, right, so at the level that they're being recruited at, I feel that Elon is very strong in terms of what we're providing, in terms of NIL education and access,” Scheible said. “Power five is kind of separate from everybody else at this point, but that doesn't mean that they necessarily have better opportunities though.”

The broader impacts of NIL on schools across the country have yet to be seen. Though the infant policy might have created more questions than answers, those involved seem to agree that, at its core, the policy is a step in the right direction.

Squadron agrees that it is a positive development, but predicts that the process of resolving these issues will be done in “difficult circumstances.”

“As a result of the NCAA pulling back , there are no rules,” Squadron said. “It's all over the map. No consistency, no uniformity. It will impact Elon and other schools by changing the recruiting dynamic and calculation, which I think is unfortunate because that's likely to add to an arms race that I don't think is really in anyone's interest when it comes to college sports.”

Since creating the interim policy in June 2021, the NCAA has not given further guidance or clarity. 29 states have enacted NIL laws, though some will not go into effect until 2023. For states with no NIL laws, it’s up to the conference or individual school to establish NIL policies if wanted.