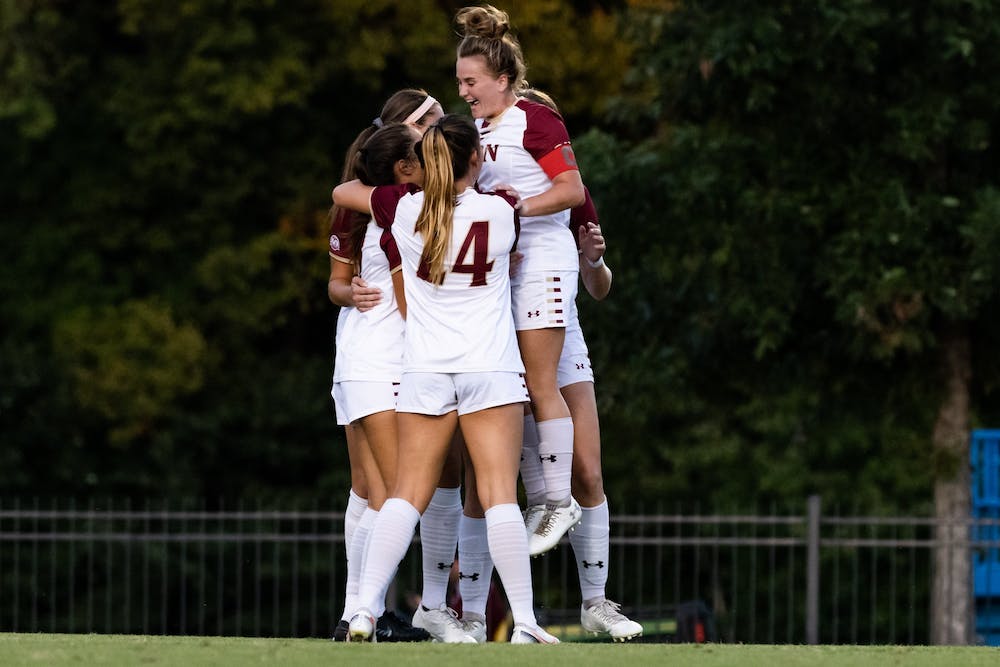 Photo by Lucas Casel | Elon News Network
Midfielder Carson jones celebrates after scoring her first goal of the game. The Phoenix would go on to beat Furman 2-0 Friday night.

Thanks to a strong overall performance, the Phoenix were able to control the game throughout, outshooting the Paladins 13-8, and 7-1 in the second half alone.

The Phoenix have now shut out its last three opponents. The team has not allowed a goal since its match on Sept. 5 against North Carolina State University. Freshman goalkeeper McKenna Dalfonso has made 11 saves in the team’s last three games, including four against the Paladins.

“It was one of our best performances,” Jones said. “We were wanting to get on the ball and were moving for each other. We did really well keeping the ball and kind of staying relaxed the whole time.”

In the fifth minute of the match, Jones scored her first goal of the season thanks to an assist from freshman defender Katie Lowe. She scored again in the 55th minute to put the Phoenix ahead by two goals.

Jones praised her teammates for their efforts and said their play sparked her supercharged performance.

“I definitely needed the entire team to have a really good performance to be able to do that,” Jones said.

Head Coach Neil Payne said he was impressed with the team’s effort as a whole, but acknowledged the dedication of the defense in particular.

“They're really strong as a unit,” Payne said, “They look really comfortable when dealing with the pressure.”