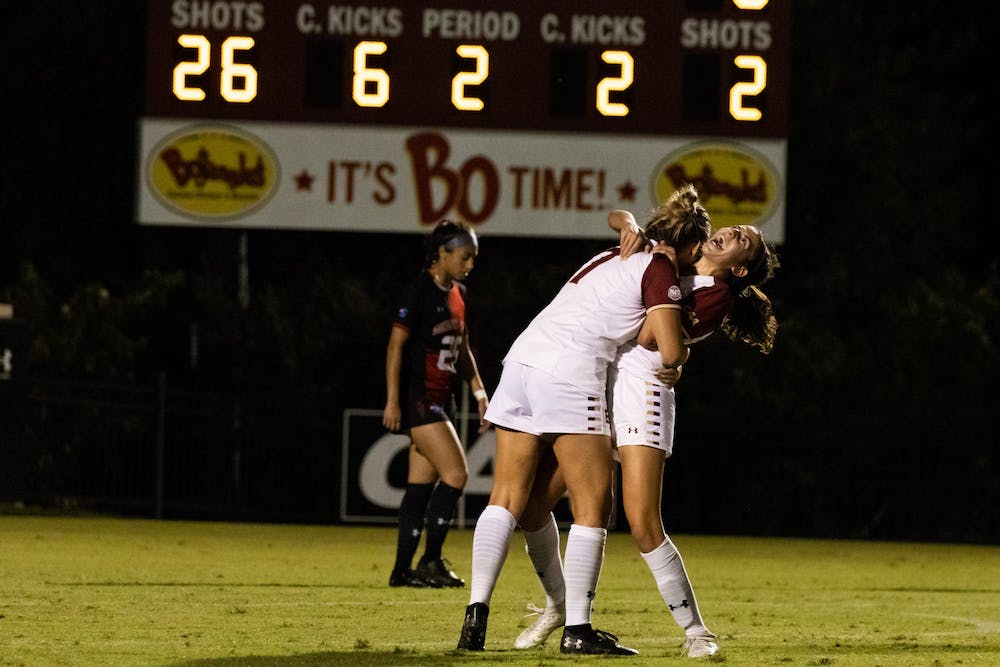 
The Phoenix celebrate their first goal of the night. They would go on to beat  Gardner-Webb 2-0 on Thursday.

The team, now sitting at 3-3 on the season, controlled the ball throughout the match, putting up a total of 33 shots, 16 of which were on-goal.

Elon University junior midfielder Lily Harkes scored the first of the two goals for the team in the 63rd minute off of an assist by sophomore forward Jessica Carrieri.

“We got a good combination there, just moving the ball quickly I think was key to our performance tonight, and I just saw the opportunity to turn the player and just took a chance,” Harkes said. “Obviously, we took a lot of chances tonight, so we’re just looking to finish those a lot more moving forward.”

Head Coach Neil Payne was pleased with his team’s adjustment moving into the second half.

“Early on in the game, we were forcing it too much,” Payne said. “In the second half, we had just a little shift in our decision making there, started to connect with some smarter passes and we really started to threaten and get it in the box and get in good positions. It was just a matter of time before we got at least one goal.”

Payne said the team is looking forward to the next matches with a positive light thanks to this win and performance against North Carolina State University in its previous contest, a 1-0 loss.

“By design, we’ve had a tough schedule. We’ve had a schedule that’s going to get us ready for conference play,” Payne said.”I’m really pleased with not only the performance tonight, but with the performance against NC State.”

Payne also said the team had a bit of additional help from the fans in attendance, who cheered on the Phoenix enthusiastically.

“The team’s really pleased with a lot of the fans that came out, so you know we want to thank the students for coming out and supporting us,” Payne said. “If the fans continue to do that, that’ll be awesome.”

The Phoenix now looks forward to its next match at American University on Sunday Sept. 12, at 1 P.M. in Washington D.C.