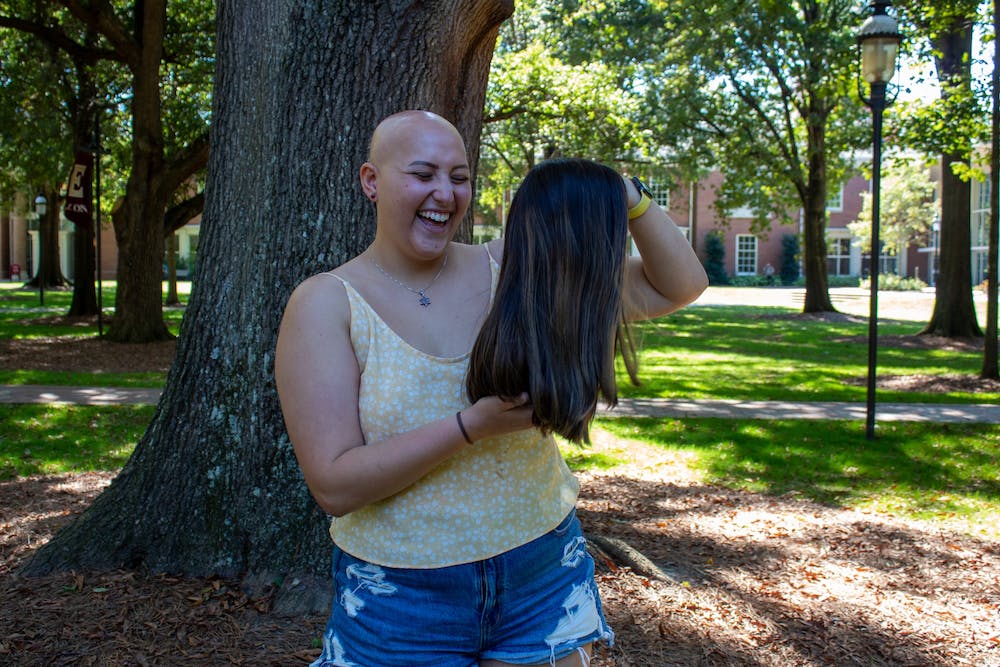 Photo by Laney Daniels | Elon News Network
Elon University sophomore Samantha Katz spent over 14 years using different treatments to combat hair loss due to alopecia, but at the beginning of the COVID-19 pandemic, she decided to go completely bald.

Elon University sophomore Samantha Katz spent over 14 years using different treatments to combat hair loss due to alopecia, but at the beginning of the COVID-19 pandemic, she decided to go completely bald. At the same time, Katz decided to start a YouTube channel to spread information, tips and tricks for those living with alopecia.

Katz, who was diagnosed when she was five years old, wanted to combine her love for making videos with alopecia awareness. Her YouTube channel, which boasts almost five thousand views, has turned into a space to not just promote awareness, but to share experiences and advice she feels is valuable for others in similar situations.

“I thought if I were younger what would I have wanted to tell myself or what do I want to tell younger people now,” Katz said. “Also for parents to see someone who has it and is young and thriving and wants to help people … I think it’s good for anyone to see.”

September is alopecia awareness month. Alopecia affects up to 6.8 million Americans, according to the National Alopecia Areata Foundation. Alopecia is an autoimmune disorder that causes patchy to total hair loss on the scalp, face and other parts of the body. While there is no cure for alopecia, there are treatment options to help hair regrowth.

During her time at Elon, Katz has chosen to stay bald and said she doesn’t feel a need to wear a wig. Katz said often gets noticed around campus, even by people she doesn’t know because of how outspoken she was on her social media before arriving at Elon. Katz said that she’s even been complimented by faculty and staff for her confidence to be bald.

“Elon dining hall staff are some of the nicest. They would always say ‘Yes! You go girl, I love it,’” Katz said. “One of them even gave me a hat, which I thought was the sweetest thing.”

Katz said she has always been confident and open to talk about her alopecia story, even as a young child.

Samantha's mother, Cindy Katz said she started to notice patchiness in Samantha's hair around the age of four and took her to multiple doctors and dermatologists to find out what was wrong. By the age of five, Samantha had lost all of her hair. Cindy said she was both sad and scared when she received her daughter's diagnosis, especially having never even heard of alopecia before.

“It was like a new word in my vocabulary,” Cindy said. “I spent a lot of time trying to figure out how to stop it, what the treatment was, will her hair grow back, or is it all going to fall out. There's a lot of unknowns with alopecia.”

Cindy said she was worried about how potential friends, employers or partners would react to Samantha's baldness. Despite those fears, Cindy said Samantha’s confidence has been inspiring to witness, especially with the creation of her YouTube channel.

“It's awesome. She really wants to promote awareness and to inspire people to not hide who they are and embrace their alopecia,” Cindy said. “She wants to send a message that you don't need hair to be beautiful and confident and to do anything you want to do.”

Samantha said she hopes people look beyond her YouTube channel to learn about alopecia and how baldness is not synonymous with being sick.

“It’s more common than you think and it looks so similar to other things,” Samantha said. “Being bald doesn't mean that you have cancer or you're sick with a life-threatening illness. Alopecia just means you don’t have hair and honestly it’s sometimes better.”

For more information about alopecia visit naaf.org or aad.org/alopecia.