Elon University football player has over 1.5 million followers on the video sharing platform 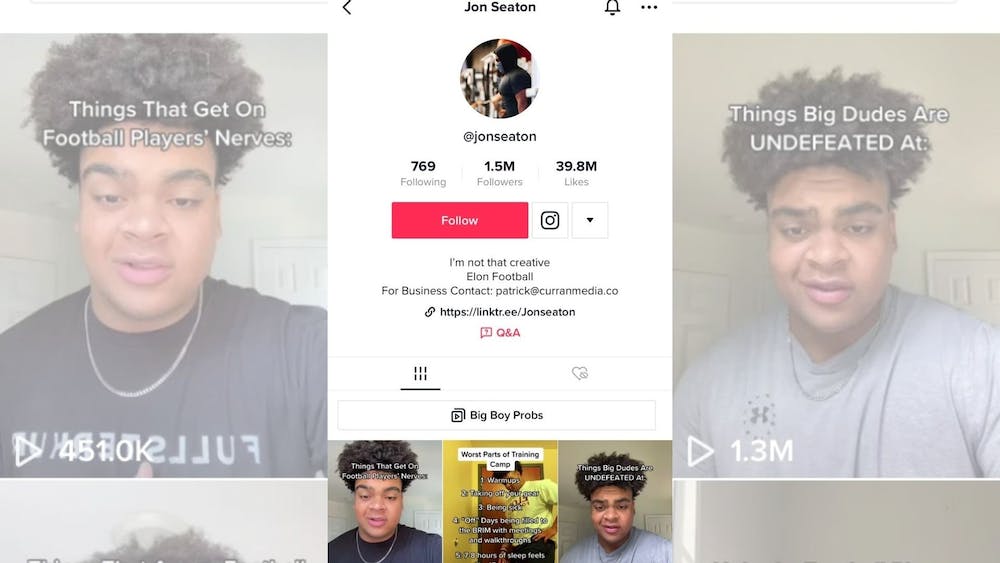 Elon University football player Jon Seaton has gone viral on TikTok with over one million followers on the video sharing platform.

Student athletes balance classes, extracurricular activities and their social lives, but one Elon University football player has one more responsibility on his plate — managing his social media stardom.

Though his TikTok account has now reached 1.5 million followers, sophomore Jon Seaton, a defensive lineman for Elon Football said he doesn’t consider himself a celebrity.

“I get up in the morning, I make breakfast, I go workout and go to sleep,” Seaton said. “It’s not anything too different in my daily life.”

To keep himself busy during the COVID-19 pandemic, when not working out or running football drills, Seaton turned to TikTok, creating content about football and life.

Seaton said he enjoys creating content focused on being a lineman. He said he has fun making these videos, which allow him to truly be himself.

“My favorite type of content to make really has to do with being a bigger guy in society because that’s the most fun for me,” Seaton said. “It’s almost a way to get away from football because I’m thinking about football for 12 hours of the day.”

“I do enjoy the Big Boy Probs because every time he does it and puts up a new video, my girlfriend asks ‘Do you do all these,’ and I say ‘Yeah, I do,’” Cerimele said.

Seaton’s first video in his “Big Boy Probs” series blew up. A few days after posting, he looked back and saw that the video had exceeded three million views on the app. What started out as a fun app to kill some time turned into something bigger than he could have ever dreamed of. Seaton said he did not expect such a reaction to the series.

“Originally, it was for fun, I wasn’t even super into TikTok,” Seaton said. “I got it and posted a video right after I downloaded the app. And then it just started gaining traction.”

Seaton’s TikTok does, however, spark some conversation between teammates every now and then. Cerimele discovered Seaton’s account before he arrived at the school and did not know what to expect when the time finally came for the two to meet

“He’s probably one of the most humble people I know,” Cerimele said. “He just does his work. He’s very humble about his success, he doesn’t shove it in our face.”

Recently, the NCAA passed new legislation that will allow athletes to profit off their name, image and likeness. Seaton said he is experimenting with different ways to diversify his content and is also working to post more on other social media platforms such as Instagram, YouTube and Twitch in order to reach more people. To capitalize on his TikTok fame, he is currently working to develop his own clothing brand with the first release coming soon.

“Once I get good with all the social media, I’ll move into a bunch of other stuff trying to see what other things I can stick my nose into,” Seaton said.

Seaton said he sets high standards for himself and hopes to accomplish “something bigger than himself.” With his growing platform, he hopes to continue to help people that look up to him.

“I’m just trying to help spread stories, some really cool messages, and put some cool stuff out there,” Seaton said.