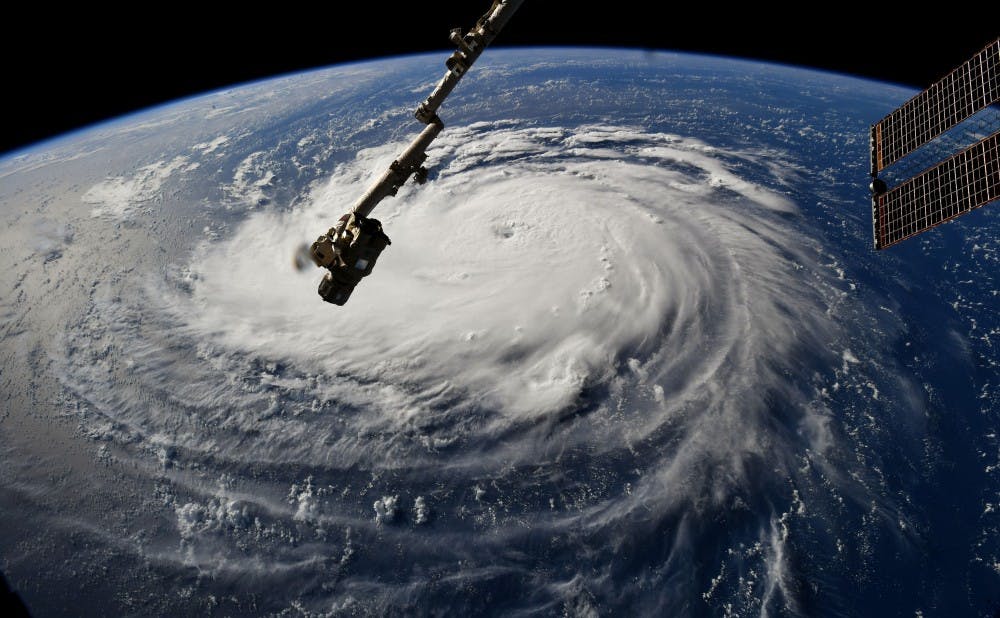 This photo from space shows Hurricane Florence from the International Space Station on Sept. 10, 2018, as it threatens the U.S. East Coast. (NASA)

Recent hurricanes and tropical storms, such as Hurricane Ida and Tropical Storm Nicholas, are continuing to impact coastal communities along the East Coast, including North Carolina.

How has climate change played a role in producing more extreme weather events, like hurricanes, in recent years?

“There’s two aspects to this. There’s a lot of other factors, but in general the warmer the ocean is, the more energy there is to make a hurricane form or hurricane stronger. So, it’s not clear we’re getting more hurricanes, but the strongest hurricanes can get stronger and we’re seeing signs of these storms — what we call rapid intensification, they grow very quickly. So, this is more energy they can take out of the ocean, the ocean is warmer. That’s one effect. The other effect is even if the storm has the same strength, in other words the winds are about the same size, a warmer atmosphere holds more water vapor that can condense into rain….The same size storm in a warmer climate, you’ll get more rain. These storms produce more rain and we saw that. Now, we’re seeing even in Ida, forgetting about New Orleans which you mentioned earlier…the Central Park rain gauge in New York City recorded three inches of rain in an hour, which is amazing for New York City and that caused all that flooding in New York City and unfortunately people were killed.”

What financial impacts have oceanside communities experienced due to hurricanes?

“We’re seeing more and more of these billion dollar disasters associated with weather associated with weather, particularly tropical storms and hurricanes. And, a lot of it comes from three effects — there’s damage from the winds, there’s damage from flooding from the rains, and right on the coast, there’s damage from what we call storm surge, which is why the ocean washes on shore. And, all of those are becoming more severe, stronger storms. The other thing that’s happening to the coastal communities is the sea level is rising... Today if you went down to Wilmington, North Carolina, I’m guessing there’s flooding on the waterfront and there’s not a hurricane over Wilmington. There’s a hurricane far out in the Atlantic, but because of sea level rise coastal communities are getting flooding, even on what they call clear sky or blue sky, fair day flooding, and then that’s made worse if there’s a storm surge of a hurricane… There’s a lot of winkles, but there’s a couple of things. One is a lot of people, and this is still in New Orleans, don’t have insurance at all for their homes. People, typically less affluent people, may not have their homes insured. So, then when their house is damaged or destroyed, they have no recourse. There’s a federal flood insurance program. It’s very complicated, and there’s a trend towards charging more for that flood insurance or not insuring people at all because the risk of floods becomes so high. This has all kinds of effects in coastal communities, beach communities and so on. If you can’t get insurance, then you can’t get a mortgage for a property and that drives the value of the properties down. That’s an economic impact that lasts longer than just an individual storm. As the risk of storms gets greater, it makes people less interested [in] investing in coastal communities or any places vulnerable to hurricanes.”

Will hurricanes continue to become more frequent and extreme in the coming years?

“We actually don’t know if there will be more hurricanes. That’s not so clear because there’s some competing effects. What does seem to be happening is that the hurricanes are getting stronger. Further north in the northern hemisphere, so further away from the equator, they’re reaching their greatest strength further into the temperate latitudes, where we live and that’s bad news for us. There is some indication that there are more what we call major hurricanes, which are category three, four and five. More of the hurricanes that form are stronger and that’s going to continue because the oceans are continuing to heat up. The other thing that is almost certain to happen is the heaviest rains from hurricanes will continue to get heavier because that’s a direct effect of the warming climate. As I said earlier, a warmer atmosphere holds more water vapor and there’s more water to rain out than any storms.”

Is North Carolina expected to experience any major weather events or hurricanes this year?

A: “The basic answer is we don’t know. We can predict… Every year they predict how severe hurricane season is going to be. They make forecasts in the summer before hurricane season starts. That’s for the entire — what we call the Atlantic basin. Because storms are rare events, it doesn’t tell you how many storms you are going to get in a particular location. Obviously if there are more storms overall, there's a higher probability of one striking North Carolina.”

What should students know about climate change, hurricanes and other extreme weather events?

“[The] number one message is climate change is real and it’s happening and we can see the impacts. We can see the impacts and things like heavier rains from hurricanes. Lots of other impacts — higher temperatures, impacts on human health — these things are all happening and we know why it’s happening. It’s because we’re putting heat-trapping gases into the atmosphere when we burn coal, oil and natural gas. We know we’re causing climate change. We know it has these impacts and we can see them. We can see it happening now. It’s going to continue even if we take drastic action now. We sort of baked a lot of warming into the Earth system, so we can’t stop global warming now. There’s some additional global warming we have to live with and, therefore, we have to be prepared for that. That’s a question of infrastructure, physical infrastructure, better stormwater systems, better protection for coastal communities, more resilient power systems communication, engineering highways so they don’t flood — all that stuff. We call that adaptation, so we’re going to have to adapt and be prepared for the impacts of climate change...That’s maybe message two and message three is in the long term the thing we have to do is to slow down and eventually stop climate change and we do that by things you probably know about, switching from fossil fuels to renewable energy, that’s the most important one. Changing our agricultural systems so they don’t produce so much carbon dioxide and other greenhouse gases, that’s another one. Stopping deforestation where it’s happening, which is mostly in the global south in the tropics. We have to do those things because if we don’t, if we just keep what they say business as usual and keep putting more and more greenhouse gases into the atmosphere, the climate change will get worse and worse and worse.”

Is there anything else people should know about climate change, extreme weather and hurricanes’ impacts on oceanside communities?

“This is a huge problem that my generation handed off to you guys, we haven’t really done much about it… But, it’s not hopeless. There’s a lot of things that can be done. It's still soluble, but it’s going to take a lot of action. Addressing these climate change issues is going to be the issue of your generation as you start your careers and go out into the world and become decision makers. This is going to be the challenge, the number one challenge you all face.”