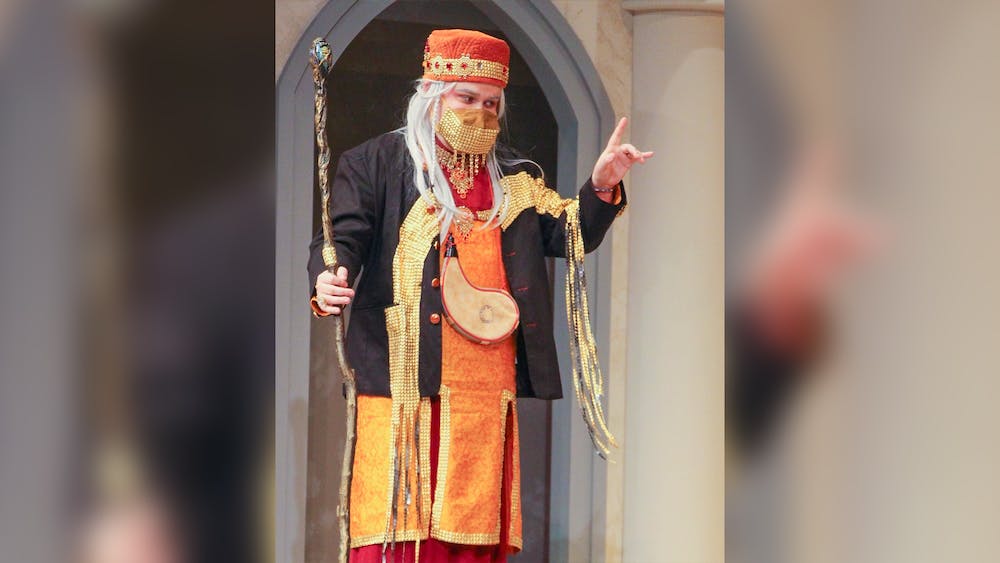 Though Elon’s production of Medea is set in a futuristic location, performers still must wear masks. Photo courtesy of Elon performing arts.

Traditional stage actors thrive off a live audience’s energy, but in Elon Performing Arts’ adaptation of Euripides’ Medea, the actors never come face-to-face with a live audience. Despite the unconventional approach to the Ancient Greek tragedy, the performance went on in a digital and prerecorded format.

Elon Performing Arts will be showing a prerecorded stage performance of its adaptation of Euripides’ Medea on April 9. Director Fred Rubeck likened the adaptation to Star Trek’s civilizations: ancient and modern at the same time.

Medea, first performed in 431 BC, takes place in Ancient Greece, 10 years after Jason of the Argonauts and sorceress Medea fall in love, steal the Golden Fleece — a magic ram’s pelt sent by the gods — and flee to Corinth. The play begins when Jason leaves Medea and their two sons to marry the king of Corinth’s daughter. Medea seeks revenge on Jason for leaving her by murdering the Corinthian king, his daughter, Jason and her own sons.

“The play follows the same scenes in the same order, and it’s heavy on language, but it’s not set in Ancient Greece,” Rubeck said. “It’s a futuristic place that looks a little like Greece, but they have electronic devices.”

This adaptation of Euripides’ play came about as a quick solution after scrapping prior plans.

This performance would not have been possible without the coronavirus pandemic, Rubeck said. Rights for previously planned plays covered stage performances but not broadcast performances, so Elon’s acting department had to replace the originally planned performance with a play in the public domain to avoid copyright infringement.

The transition from performing live on stage to acting for a camera was a different experience for performers and production members alike.

Actor John-Luke Lindstrom, playing First Correspondent, said the production of Medea was different from any show he had worked on because of the new protocols and changes in the performance season.

“It’s a really meticulous process for us to safely do everything now,” Lindstrom said. “We don’t have a dressing room where half the cast goes in and the other half goes out. It’s now two people at a time have to get changed, and they have to wipe things down in between each session.”

Lead actress Kendra Chideya, who plays the titular role, also noted the technical challenges of bringing this form of Medea to life.

“[The act of performing] was different. It was a lot of stopping and starting,” Chideya said. “Usually with theater, you do the whole thing, but since we had to make some adjustments and keep in mind the technical elements.”

Actors familiar with live, on-stage plays had to learn to accommodate their acting for the camera.

For Chideya, the most challenging part was learning the multitude of lines and understanding the circumstances of her role.

“[Besides the words,] there’s also the circumstances of being a woman during that time period, Ancient Greece, and the things that she does throughout the play can be challenging,” Chideya said. “But as an actor, those challenges, you can learn a lot from them. I had a blast, and I learned so much from it. I’m very grateful for the experience.”

The show began production in January, but was delayed until March due in part to COVID-19 regulations. The performance will now go live on April 9 at 7:30 p.m. and be available for asynchronous viewing through the Elon Performing Arts web page.