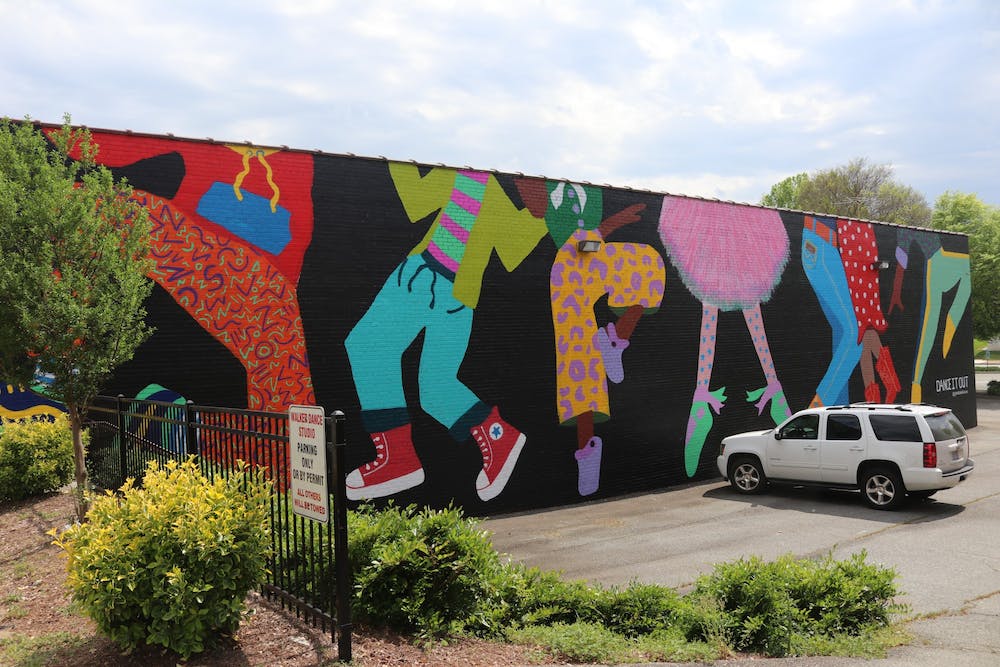 An explosion of colors, shapes and patterns facing Spring Street, Gina Franco’s mural “Dance it Out” is the latest effort by the Burlington Downtown Corporation to cultivate a more creative community and economic growth in Downtown Burlington. The nonprofit organization contracted by the city of Burlington put out a call for mural artists.

It was Franco’s first sketch that stood out against the other 18 artists vying for the commission, said Sarah Beth Hardy, Burlington’s downtown manager. Even without details, she said the design radiated joy.

“When we saw the concept, we were just immediately in a better mood,” Hardy said. “It makes you smile, and it makes you want to dance and to interact with it.”

Franco said her vision for the mural was to create something that felt full of movement and was inspired by the different dance styles available at the Walkerdance Ballet Theatre, with which it shares a wall. Franco pushed herself to paint the emotion that comes from dancing while only depicting the dancers’ legs.

“I challenged myself to see if I could create a feeling without showing emotion in that person’s or character’s face,” Franco said.

Franco sought out much of her inspiration from her own life, creating characters and personalities through the colors, shapes and patterns in the clothes and accessories she sees everyday.

Her best friend wears red cowboy boots like the ones that make an appearance. The dancer in the yellow pants is modeled after @FabEllis, a thrift account Franco follows on Instagram.

As an artist who works predominantly in public spaces, Franco loves to see people interact with the mural. Everyone who comes by leaves with a favorite person, Franco said, and that connection validates what she sought out to do.

“I want to be able to gauge my impact,” she said. “I don’t feel like my art is activated unless somebody comes and interacts with it.”

Public art like “Dance it Out” is directly related to a rise in economic development, said Hardy. Burlington’s first commissioned mural, painted by Chicago-based artist Mauricio Ramirez on Church Street, brought so many visitors that “Dance it Out” is the fruit of fundraising efforts for another mural downtown.

Hardy’s and the Burlington Downtown Corporation’s goal is to create an arts and entertainment district in downtown where artists can showcase their work and residents can feel prideful of their hometown and continue to interact with the art and other local businesses.

A creative art scene motivates increased downtown activity, Hardy said. When visitors come to see the mural, they might linger to grab a coffee at The Blend & Co. or have a meal at Burlington Beer Works. With the completion of “Dance it Out,” throngs of young ballerinas from Walkerdance Ballet Theatre regularly take photos underneath the ballet slippers on the wall.

The success of the two murals has brought more momentum to create more public art spaces in downtown Burlington. Hardy hopes that Burlington will continue to be artistically energized and, with the help of creative people, become a thriving arts and culture community.

“I’ve anecdotally heard from a lot of our business owners and property owners,” he said. “They’re excited to pay artists to come and put murals on their buildings too.”