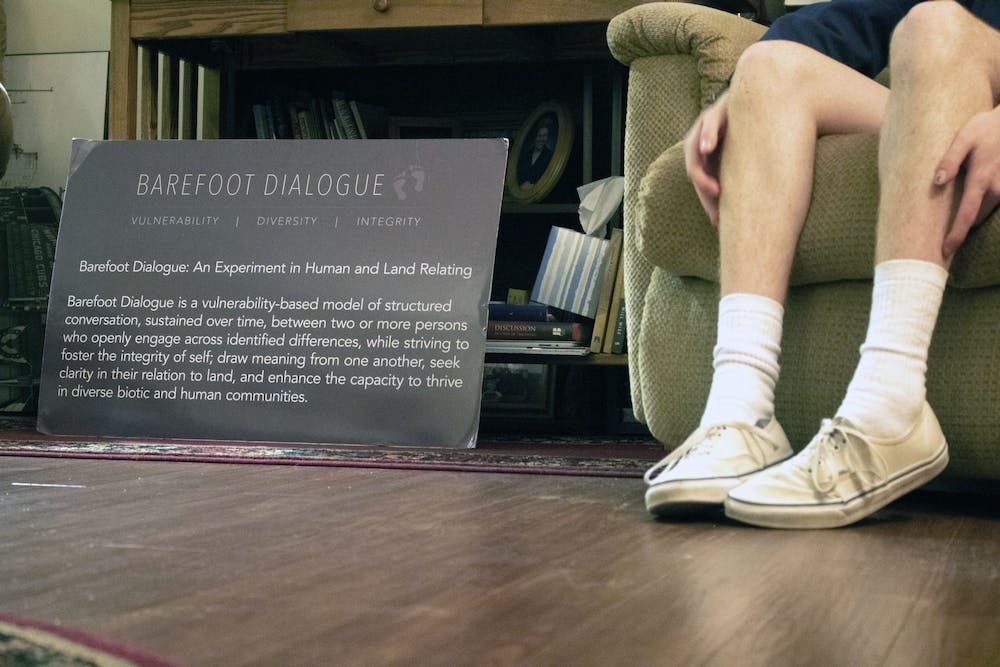 Walking barefoot is not a common sight on a college campus, nor is it really encouraged.

However, Elon’s Barefoot Dialogues organization offers Elon students an outlet to participate in “barefoot” conversations where vulnerability — and taking off one’s shoes — is encouraged and accepted.

Elon sophomore and Barefoot Dialogues facilitator Morgan Chisholm said being barefoot represents a mindset that is cognizant of one’s own vulnerabilities and circumstances and those of others.

“It’s less about physically being barefoot and more about the mental aspect of it,” Chisholm said. “Being able to take off the layers, the pressures, the social anxieties and just be there.”

University Chaplain and Dean of Multifaith Engagement Jan Fuller helped initiate Barefoot Dialogues on campus in fall 2019. She said the eccentric title captures the intention of the organization.

“We want the title to connote and to encourage in us a little playfulness, a little connectedness, a little less uptight and covered up,” Fuller said. “Our intention is to be ‘barefoot’ together.”

"It's less about physically being barefoot and more about the mental aspect of it.Being able to take off the layers, the pressures, the social anxieties and just be there."

Fuller said a barefoot, vulnerable mindset is not always encouraged on a college campus. Instead, students are taught to put on a mask, first figuratively and now literally.

“In an academic setting, we are so often, both in and out of the classroom, performing for each other. We’re putting our best foot forward, acting like we’re confident and we’re moving ahead,” Fuller said. “There are very few places where we can and where we are actually encouraged to choose vulnerability.”

Chisholm started attending Barefoot Dialogues just two weeks into her first year at Elon. Chisholm said she struggled to find resources and feel accepted as a student with a disability, but Barefoot Dialogues has been a way for her to connect with other people and explore vulnerability.

“I think that we forget sometimes that we’re only human,” Chisholm said. “To be able to talk about what’s weighing on you and to really delve into your experience, and that happens when you choose to be vulnerable with people that you wouldn’t otherwise be vulnerable with. And that’s the beauty of it.”

Sophomore Hugh Goldstein, also a Barefoot Dialogues facilitator, said meetings usually last for an hour and a half, but students are free to leave at any time. At the start of each meeting, facilitators address the common commitment rules, followed by “salutes” or shoutouts and then facilitators introduce the week’s centerpiece.

Centerpieces are versatile activities — a poem, song, story, interpretive dance or group exercise — put together by facilitators to initiate conversations. Centerpieces often relate to stressors that students may need to address, like finals or larger issues that are happening in the world.

Chisholm said centerpieces spark conversations that enable students to connect over a topic while also recognizing their differences.

Goldstein said the dialogues also provide students a place to just talk, rather than feeling pressured to turn words into action. He stressed that Barefoot Dialogues is not a policy-related organization but an “entity of people that get together.”

“A large part of the students that are in Barefoot do a lot of that policy-based stuff, or they’re involved in other spaces on campus, and we need a space to just sort of decompress from all of it,” Goldstein said. “We just need to sit down and look at this from ethical, spiritual and a personal standpoint and then from someone else’s standpoint.”

Both Chisholm and Goldstein said confidentiality is a common commitment rule, and according to Chislom, “what happens in barefoot, stays in barefoot.”

"It gives us a safe place to let our guard down for 90 minutes, actually say what we're thinking, to hear other stories and to begin to make meaning with the people who are in your community who may not really feel like they can speak their truth."

Before Barefoot Dialogues made its way to Elon almost two years ago, Fuller was introduced to the organization by its creator David Dorsey, who was a long-time colleague of Fuller’s and is the director of religious life at Oberlin College in Ohio. After attending a 90-minute experimental workshop on Barefoot Dialogues, Fuller said she knew this was a “jewel” that Elon needed. The two institutions are the only campuses in the nation that offer Barefoot Dialogues.

The vulnerable conversations that Barefoot Dialogues encourage align closely with Elon’s commitment to diversity, equity and inclusion, according to Fuller.

“It gives us a safe place to let our guard down for 90 minutes, actually say what we’re thinking, to hear other stories and to begin to make meaning with the people who are in your community who may not really feel like they can speak their truth,” Fuller said. “We hope that it leads to a sense of, we don’t have to agree, but we do need to listen deeply with our hearts, our minds and our souls to the stories that are being told to us by people who have a different perspective than we do.”

Barefoot Dialogues meets every other week on Mondays in Colonnades Neighborhood at 9 p.m. and Thursdays in the Truitt Center at 5:30 p.m.

Barefoot Dialogues currently operates outside of the Truitt Center for Religious and Spiritual Life but will be officially connected to the department next year. Fuller hopes this will help expand Barefoot Dialogues and potentially organize dialogues around specific themes, such as an interfaith group.

“Right now we’re just taking who we can get, but we have really emphasized there’s a great diversity within the group,” Fuller said. “As we get to know each other, we realize that we’re a very interfaith group with multiple commitments and perspectives, and that’s what makes Barefoot really rich.”