Q&A with an Elon arborist

Arborist Wendy Williams discusses her passion behind caring for trees on campus, Elon’s oldest tree and her typical day as an arborist 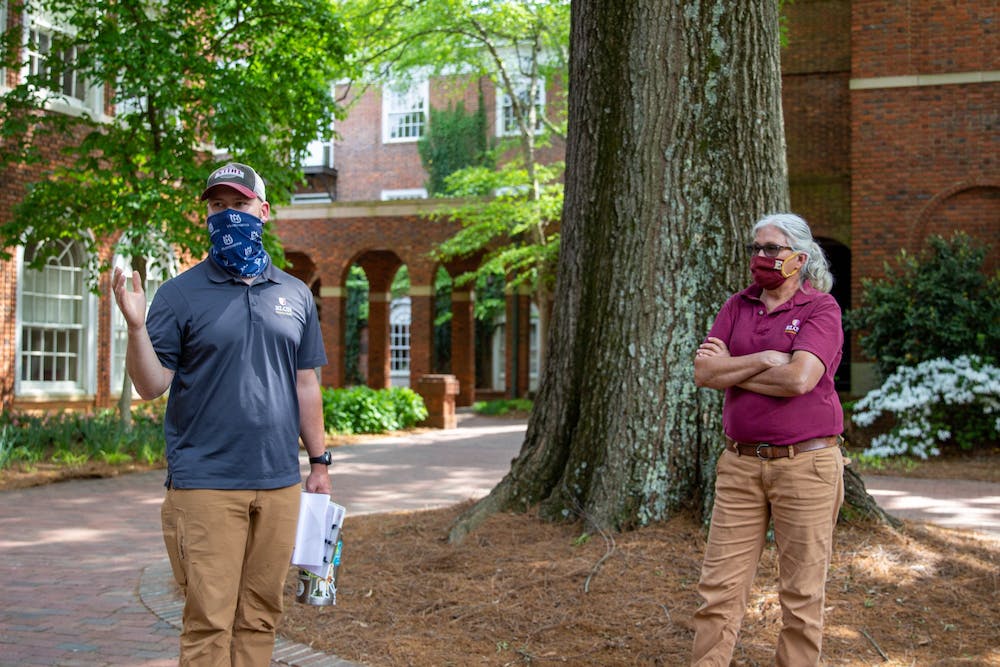 Photo by Graysen Shirley | Elon News Network
As Elon’s arborists, Cameron Holmes (left) and Wendy Williams (right) are in charge of cultivating, managing and studying the diverse variety of trees on Elon’s campus.

Wendy Williams grew up with a tenacious curiosity about caring for plants and trees. During high school, Williams took a class on horticulture, where she quickly realized she wanted to work with trees and plant life.

After high school, Williams went to work for a landscaper, who introduced her to greenhouse nurseries where she got to practice growing shrubs. Williams then came to Elon in 1993 as a gardener, but she eventually switched to being an arborist after realizing working with trees was where her true passions were. Williams was later joined by Cameron Holmes in 2017, who is another arborist at Elon.

Arborists like Williams and Holmes are helping to protect and preserve plant and tree life on campus, especially after former president Leo Lambert designated Elon as a botanical garden in 2004. Williams and Holmes both hope their knowledge and upkeep of Elon’s plant life will help oak trees and other plants to continue to provide a canopy of greenery on campus for many years to come.

What does a typical day look like for you as an arborist?

A typical day, we do trash pickups early in the mornings. Because of COVID, we’re having weird hours right now. They are trying to space our department out, so Cameron and I come in at six in the morning and we’ll do trash pickup until 7:30 a.m. and sometimes we take care of other odds and ends during that time period too. Then, we will have break and then we will start our day, so whatever project we have decided is the priority for that day, that’s what we will do. So, we will do tree pruning projects or tree removal projects or just whatever the landscaping department needs. We’re pretty versatile, we’ll do whatever they ask us to do if we can do it.

What is your favorite part about being an arborist, and what makes you so passionate about the work you do?

Well, I love trees. It was challenging to figure out how to properly prune them when they were young and training them to grow because when they grow in the woods, they’ll grow normally because they’re just looking for the sun. But, when they are planted out in the full sun, they’ll bush out really, and so you’re trying to train it to behave as if it’s in the woods when it’s really not in the woods. So I found that really challenging at first, but now I know how to do it. I enjoy doing that. And I just love nature and being outside, and I love trees, I mean they’re just awesome, and all kinds of plants really. I think I would have been a science major had I went to college, so it’s sort of like science, but not really.

What input do the arborists have regarding construction projects on campus, such as the new Innovation Quad?

Sometimes when they design new areas, we don’t get a whole lot of input, but actually, on the Innovation Quad he has asked for our suggestions. We’re actually growing plants for the trees for the innovation quad on our pot nursery which is out on Loy Farm, and so, he’s trying to find trees that he feels are innovative or have an innovative story. So I’ll make suggestions, and he finds trees he’s interested in growing, so it’s kind of a collaboration on that one. But normally, things are designed. We have an in-house designer who’s designed some stuff, and we also contracted out to another company for design work.

What is the oldest tree on campus?

Well, we really don’t know for sure until we cut them down. That one behind Smith and HBB, that one with the really big branch, that’s an old tree. And there’s an old white oak near the Alamance Building. If you are looking out the door of Alamance that looks out toward the railroad tracks and then look over towards Mooney, there’s a large white oak tree right there. And that tree has a cool story because it was damaged, somehow or another either lightning or something happened, but there became a decay section in it, and they used to fill decay sections in trees with cement. So when I first came over here, you could still see a little bit of the cement, but the wound is closed now, so you can’t see the cement in the hole. But they used to make grooves in the cement to make it look like a stack block or something in there, so that was pretty cool. Another one I think is really the oldest is behind Powell House, which is behind the tennis courts, but that is the most beautiful tree we have on campus. Unfortunately, it is not on main-main campus but if you’re working over at the community garden near the Hillel house, it is right there.

Why is it important to preserve plant and tree life on campus?

It just adds a sense of serenity, I think, more than anything. Classes are pretty stressful and work is stressful for the office people, and they step out and under the cool shade of a tree and the wind and the flowers, it’s just very soothing. Of course, there’s all the services to nature and the pollinators and the ecosystem, trying to add diversity to help our native ecosystem try to hang in there too. I’m just trying to be a good land steward.