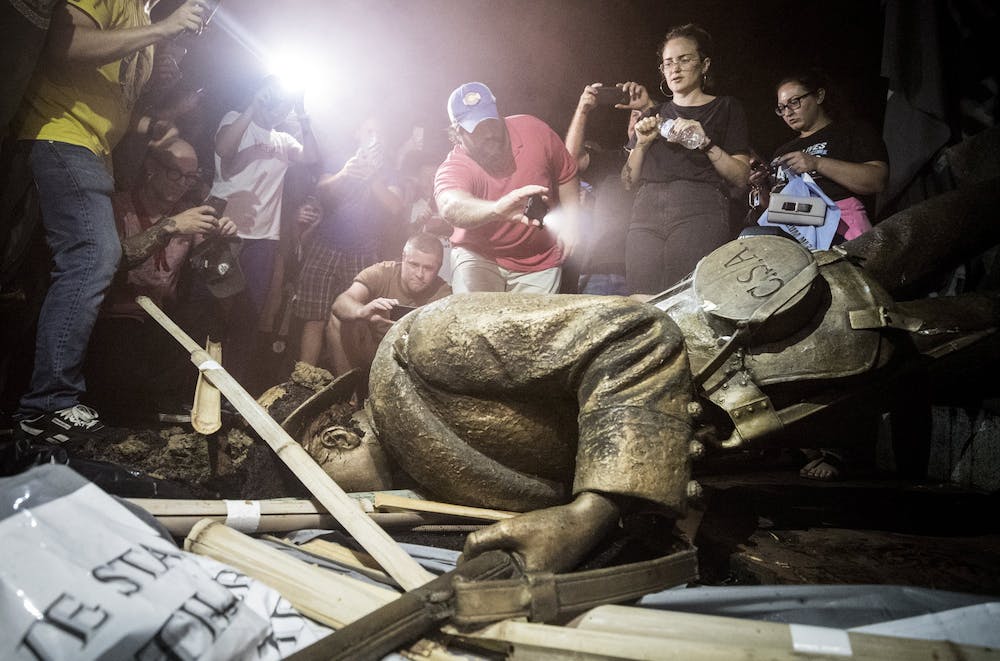 Demonstrators and spectators gather around a toppled Confederate statue known as Silent Sam at UNC-Chapel Hill on August 20, 2018, in Chapel Hill, N.C. Demonstrators surrounded and obscured the statue with large banners before toppling it. (Julia Wall/Raleigh News & Observer/TNS)

#silenced tells the story of social media posts and comments about the leading up to, the fall of and the aftermath of the Confederate monument Silent Sam at the University of North Carolina at Chapel Hill. Elon News Network spoke with the playwright and projection designer Sydney Dye, who offered insight about her new production.

Dye is the playwright and projection designer behind the virtual production set to premiere Feb. 18, on the #silenced website. Much of Dye’s research has been focused on how social media integration into theatrical design and storytelling can cultivate conversation around controversial issues. #silenced was born from this convergence of ideas.

Can you introduce the production, the meaning behind it and what made you want to create this production?

In my sophomore year, when I started the writing process for the proposal, I was interested in a couple of different avenues that all fit nicely together to form #silenced. I was interested in projection design and theater, which is my main focus and hopefully what I’ll be doing after graduation. I was interested in documentary storytelling and social media, so with those three avenues, I wanted to look at how projection design and social media can be integrated into theatrical storytelling to form conversations. Having all that is great, but at some point you have to find a story to tell in order to test this methodology in research. Using a methodology from a German director, Erwin Piscator, known as the father of documentary storytelling. I chose to look at Silent Sam, a Confederate statue that stood for over 100 years at the entrance of UNC Chapel Hill until it was pulled down by protesters in 2018. I’m from Chapel Hill, and growing up in high school, I heard a lot of different opinions about the statue, but once the statue fell, seeing the reaction on social media and how polarized this community actually is was really interesting and fit perfectly with what I was looking at.

What are some ways a virtual production varies from a live one? How has it been easier and/or more difficult to produce than a live production?

When COVID-19 happened, we switched from an in-person production to a virtual production, and a lot of what the theater community had been seeing was mostly Zoom readings. Early on when we made the switch, we decided we didn’t want to do a reading. The research with this project is very much design oriented, so we wanted to find some way to preserve those design elements in a virtual showcase. [A virtual production] is a lot more technical than a live production, so we had to find new software to use. With this project, there was a lot more prep involved than a live show. We are using a software called Capture, which allows us to have a 3D model of the set with actual lighting, projection design and 3D models of people moving around. So with this project, we were still able to have a lot of those normal conversations you would have in theater. I think the biggest difference is actually what is happening right now, which is editing it all together. Instead of a showcase that’s live where all the work is meshing together, we have a video that we’re putting out, so all the work is being edited together into one final product.

How has your experience been working with the actors and designers during the coronavirus pandemic?

Everyone that has worked on this project has been absolutely fantastic. Our two directors, Weston LeCrone and Sydnie Rogers, had a conversation early on when we did the audio recording, how are we going to keep everyone safe. We needed to have our stage manager either in the room or virtual, the directors there, and an actor there. So we ended up recording everything with the actors wearing masks in the Center for the Arts. Everyone has also been really good at doing Zoom technical rehearsals, from the production team, to the design team, to the actors. Everyone’s flexibility has just been absolutely amazing.