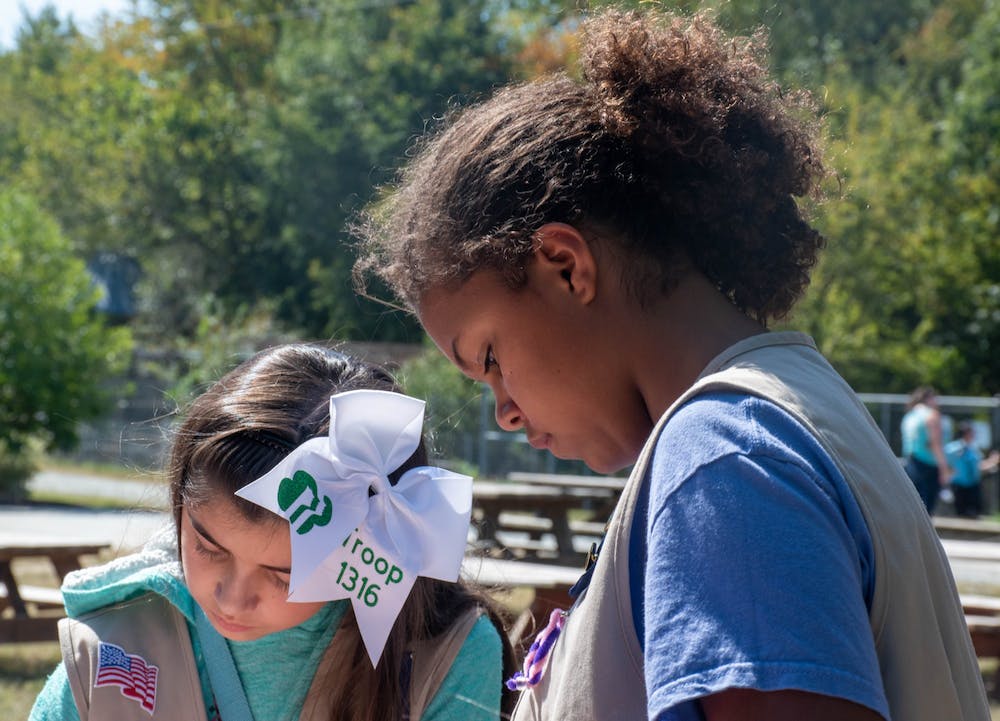 Two Girl Scouts from Troop 1316 work together on a project back in 2019. In 2021, many troops have opted for a virtual schedule.

A disjointed chorus of voices cut in and out of the Zoom call, cheery but spastic due to poor internet connection.

“A circle is round; it has no end; that’s how long I want to be your friend!” sang the pixelated choir: three young Brownie scouts and two troop leaders from local Girl Scouts Troop 13214.

The last time Troop 13214 met in person together was March 5, 2020, two days after the first confirmed case of COVID-19 was identified in North Carolina. By the time their next meeting was supposed to take place on March 19, Gov. Roy Cooper had closed K-12 public schools statewide and banned mass gatherings. Troop leader Rosie DeMario knew she had to make other plans for her troop going forward, and in April 2020, they began meeting weekly on Zoom.

“At that point, it was more of a support system, because nothing was really structured yet,” DeMario said. “But it was really nice because, you know, it’s still scary now, but it was very scary then.”

Elon News Network spoke with DeMario back in September 2019 when Troop 13214 began gathering at Elon Community Church. The troop is now in its fourth year of membership and is currently made up entirely of Brownie scouts — girls in the second and third grades.

DeMario founded the troop shortly after the 2016 presidential election. She said she was disappointed by the results and began seeking opportunities to empower young girls and teach them the importance of self-confidence and leadership.

But when local governments began enacting stay-at-home orders due to the coronavirus pandemic last March, Troop 13214 and other Girl Scouts across the country were forced to go virtual to continue their programs. Now, almost one year later, what began as a quick fix has become routine into the foreseeable future.

Girl Scouts councils have released guidelines for in-person meetings that adhere to state limitations on mass gatherings, but DeMario and her troops chose instead to observe measures taken by the Alamance-Burlington School System. DeMario said their membership fluctuated throughout the pandemic, but their Zoom meetings grew more organized.

“Sometimes our meetings are awful,” DeMario said. “Nobody’s paying attention, everybody’s off and it’s kind of like another obligation for people. And then we’ll recover with a meeting like tonight, where it’s all really fun, and everybody’s engaged.”

Troop 13214 ended last year with seven girls, and this year, they have five consistent scouts that participate in weekly virtual activities either organized by DeMario and troop co-leader Hannah Hendricks or borrowed from the Girl Scouts website.

Last week’s Zoom meeting centered around a virtual activity that had the Brownies solve puzzles to distribute Girl Scouts cookies; the girls are currently in the middle of cookie season.

This year, the Girl Scouts organization shifted their cookie-selling strategies online. Each scout has a unique sales link that can be used by customers to order their cookies, and customers who don’t personally know a scout have several ordering options including the Girl Scout Cookie Finder App and contact-free delivery via Grubhub.

According to DeMario, in-person group booths are permitted by the organization, but Troop 13214 opted out of hosting group booths due to the pandemic. Several of her scouts have hosted mini booths with their parents, DeMario said, and Troop 13214 is already close to passing their goal of 800 boxes sold.

Elon University’s chapter of Kappa Delta has also been counting down the days until cookie season. The sorority partners with the Girl Scouts as one of its national philanthropies, and according to Kappa Delta’s website, sisters from across the country dedicate over 125,000 hours working with Girl Scouts in their communities.

Lucy Ham, vice president of community service for Elon’s chapter of Kappa Delta, said the pandemic has made it more difficult to do hands-on activities with local Girl Scouts troops, but she is hoping to make the most of cookie season.

“Girl Scouts as a whole is a really great program for building social skills, life skills, confidence — we always talk about confidence, that’s kind of our big thing,” Ham said. “I think it’s awesome [for them], seeing older girls and being able to build those relationships.”

Ham said Kappa Delta will be using online order forms this year rather than working physical cookie booths. They will then work with several local troops to package orders, and Elon students can even get Girl Scouts cookies delivered directly to their campus mailboxes.

Ham’s sentiment was echoed by former Girl Scout and Elon sophomore Courtney Shanley, who fondly remembers her time as a Girl Scouts Brownie. Shanley said although she understands the necessity of virtual meetings, she regrets that today’s Brownies can’t experience all the organization has to offer.

“In the majority of the meetings, we talked about inclusivity and how to treat others with kindness — treat others the way you want to be treated,” Shanley said. “And I think the troops are somewhat missing out, since it was fun to be with your whole troop and make new friends within it.”