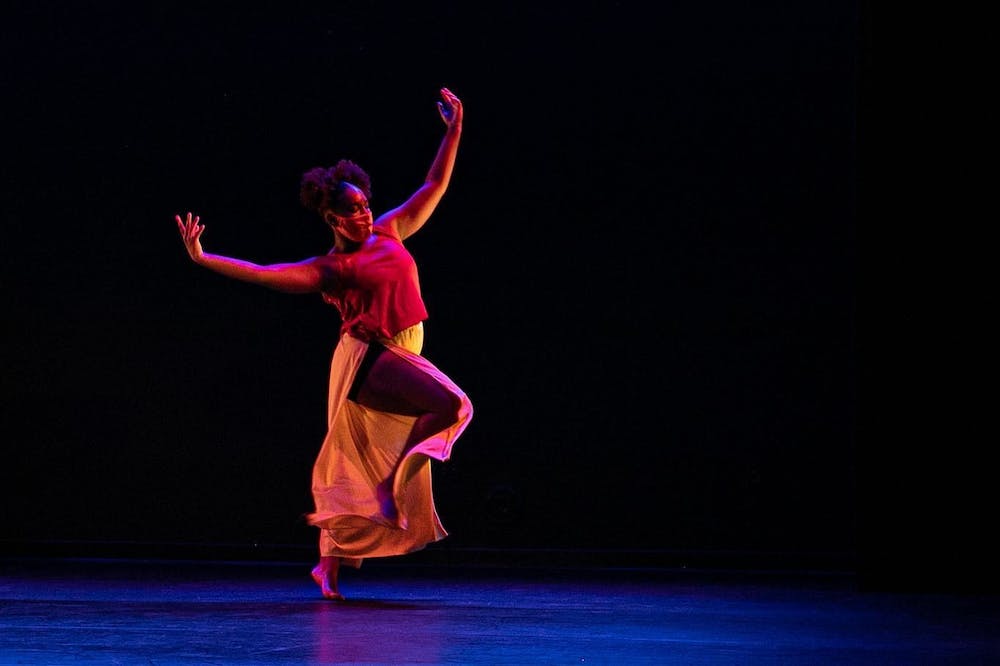 The 2021 Black History Month Dance Concert came with long hours of rehearsal and conversations that left dancers in tears of mixed emotions.

The concert features numbers in dance styles like West African dance, a poet laureate of North Carolina and a live band.

Unlike in past years where a recital occurred live, the cast and crew filmed the show in November, and the significance of the performance has only increased since. Elon University sophomore Eileena Boyce said even though the show will be presented virtually this year, the emotions felt by the cast will still be apparent.

“It’s definitely had an impact on me,” Boyce said. “Even during the rehearsal process, we all had to have really deep conversations about how we felt about current events and be very raw about what we were feeling.”

“Sometimes it’s hard to have a conversation with people because they are afraid that their opinions [are] gonna get judged or that people aren’t gonna see eye-to-eye so they’d rather not have conversations or just don’t want to learn about things that they should learn,” Boyce said.

The concert also initiates the hard conversations that happen when people address sensitive topics, as well as current events like the murder of George Floyd. Boyce hopes both will change perspectives and create newfound connections. Seeing the emotion behind the movement and learning from that is something she said cannot be found in a book.

Keshia Wall is the director of the concert and wants people to start asking difficult questions after viewing the performance. The show’s title this year is “Redemption for Our Skin,” and Wall emphasizes the dehumanization of black people and oppressive systems in the United States.

One of the events in mind was the automobile parade supporting then-President Donald Trump that drove through Elon University’s campus in September and left some students concerned for their safety.

“As we were creating these works, we were thinking about the motorcade that went through Elon and thinking about all of these things that the president at the time was speaking from his platform,” Wall said. “I’m literally looking at my students in the face and seeing the pain and agony that they’re facing as they’re learning all of these truths about how the world works.”

Wall said all participants were more invested in the concert this year than ever before — especially Black women.

“There are numbers and numbers of women just this year that have been killed at the hands of police brutality and others for other reasons, and their names are almost never hardly mentioned in [the] media,” Wall said.

Choreographers in the show considered both systems of oppression and the resilience of Black people in the United States when crafting their performance.

“On the one hand, we’re really thinking about systems of oppression but also the resilience of Black people in America and how we have to adapt, and how we’re still great and amazing artists and people of color,” Wall said.

As the movement against police brutality and racism continues amid the coronavirus pandemic, Wall believes the Black community only gets stronger.

“Our world got really small really quickly, but internally, we had to grow and get a lot bigger and still be resilient, despite everything that’s been going on, all the horrific acts of violence that have been going on in America,” Wall said. “And so that really is just kind of the framework for the entire show this year.”

Elon senior Jenna Kulacz said being a white dancer in the concert held a lot of meaning to her because she had to be careful in the way she executed the movements. Kulacz wanted to dance in a way that made Wall, her peers and the university proud. She said race does not cross her mind while performing.

“We’re just smiling at each other through our masks, feeling that energy and dancing as one,” Kulacz said. “That’s the way I feel when I’m dancing, but I definitely am aware of my whiteness and I do want to make sure that I’m being respectful in every sense of the word.”

This will be her third and final year performing in the concert, and Kulacz said she is absorbing every last second with her fellow dancers and faculty.

“It’s really meaningful to me,” Kulacz said. “I really wanted to just make the most of it and make sure that I’m in the moment each and every rehearsal and taking it all in because this is really when it counts the most, because it’s going to be what I remember when I graduate, which is so sad, but it’s really exciting.”

The Black History Month Dance Concert will stream on elonperformingarts.com on Feb. 26 and 27 at 7:30 p.m. Boyce said even when the concert was in-person, it did not get as much of a large audience turnout as other productions in the performing arts department.

The Friday performance will be followed by a question and answer session on Zoom that can also be found on elonperformingarts.com. Wall hopes viewers will bring questions, concerns and good conversation to the session.

“We are human,” Wall said. “We believe the same way. We cry the same way. We have fears, we have triumphant moments, we’re amazing. We’re dope, right? We’re dope people and there’s going to be things that lead you, I think, throughout the concert, [to] some very teachable moments and very thinkable moments.”