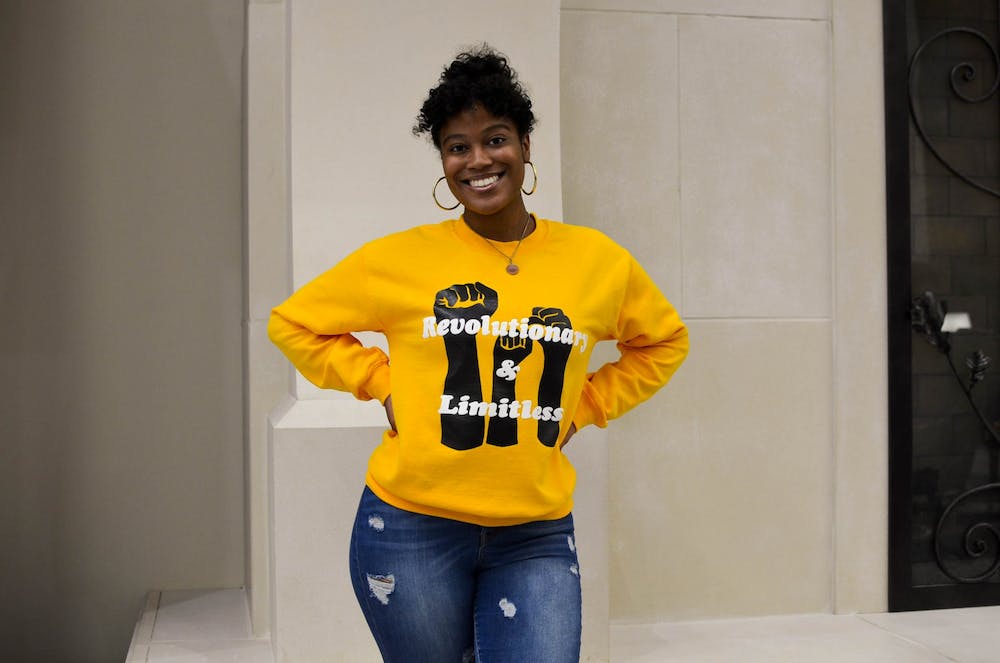 Photo by Frances O'Connor | Elon News Network
Soniyah Robinson is the founder of Boundless Blackness, a fashion and storytelling brand dedicated to elevating voices in the Black community.

The racial injustices repeatedly replayed on the news in the summer of 2020 were getting to Soniyah Robinson. Frustrated, the Elon University sophomore took action to raise awareness about police brutality and racial discrimination.

The Black Lives Matter movement and a summer of protests against racial injustice inspired her to follow suit and raise awareness about the plight of Black people in America, which led her to create the company on Jul. 22, 2020.

“[Entrepreneurship] is something I always saw myself getting involved in. But this summer, being in quarantine and having more time to think things through and do research, I realized I really wanted to start a business,” Robinson said. “With the [Black Lives Matter] movement getting a lot of attraction over the summer, I wanted to create a platform that emphasized how limitless Black people are.”

Robinson is interested in the representation of Black people in television and film and wants her brand to be a positive outlet. This led Robinson to create an independent major — she chose to call it “social justice” — which includes courses about African American studies, poverty and social justice and women’s gender and sexualities studies minors.

The brand shares Black experiences by interviewing members of the Black community and sharing their stories on the company’s website. Robinson has covered stories on Black artists, politicians, advocates, health care workers and entrepreneurs. Her goal through her writing is to amplify Black voices.

The clothing includes designs of the Black power fist paired with text that says “revolutionary and limitless” and a Malcolm X quote on the back. Another design portrays the African continent with the words “descended from greatness.”

Plans to make a video series documenting the experiences of Black people are in production. The series is expected to launch this month on the website and social media with the help of Miracle Smythe, a sophomore cinema and television arts major.

Smythe is one of the digital creators and videographers for the company. She said she likes being part of Boundless Blackness and it has instilled within her a sense of belonging.

“Initially, I was just going to be taking pictures for merchandise sales, but when I saw Soniyah’s vision through my camera lens, I realized how important this brand could be for so many people,” Smythe wrote in a text to Elon News Network. “My familiarity with the meaning of Blackness allowed me to find more confidence in my work.”

Boundless Blackness is looking to partner with on-campus organizations such as the Black Student Union, the Center for Race, Ethnicity and Diversity Education and the National Pan-Hellenic Council to engage in racial equity initiatives and spread the mission of the company.

Robinson hopes to inspire other students who are thinking about starting their own business with her entrepreneurial efforts.

“There is no better time than now. Stay resilient through it and believe in yourself. And do not get caught up on superficial things,” Robinson said. “I think social media makes people think that starting something can be easy and you may get a ton of followers and a ton of sales all at once, but [understand] that things take time. Keep pushing at it. Believe in yourself and believe in your mission.”