Still without a spring schedule, women’s soccer tries to remain hopeful for a season 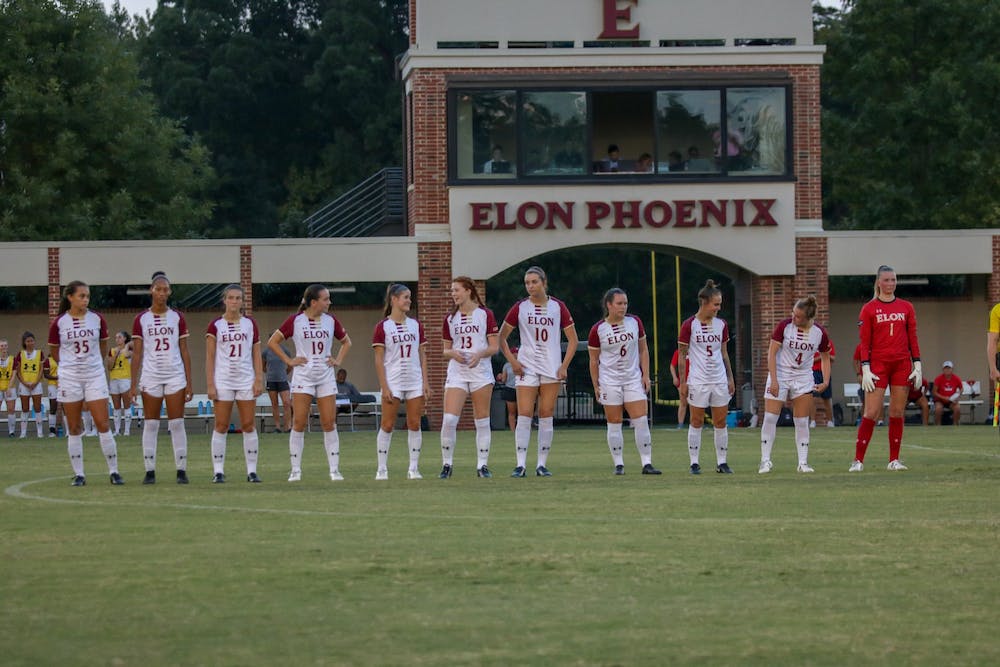 The 2019 campaign for the Elon women’s soccer team was a historic one. Making it to the second round of the Colonial Athletic Association Championship tournament for the first time in program history capped off the team’s best season in the conference to date.

Though she said she is disappointed with the team’s final loss against Hofstra University, senior goalkeeper Valentina Estrada said the team is hopeful to produce the same results, if not better, this season. She said they are always striving to improve.

University football and basketball teams have been given a schedule for CAA play, but women’s soccer has yet to confirm that its spring season will actually happen. Senior midfielder Kara Kimberl said that it can be difficult to maintain a positive mentality while the fate of her final season remains unknown, but she still tries to go out to practices and give everything she has.

"We're just kind of making the most of it. I mean, it's tough. This isn't how we had always planned this year to go.It's kind of hard because at this point, we would have been done with our soccer careers, and now it's all kind of hanging in the balance, and we don't really know what to expect."

“We’re just kind of making the most of it. I mean, it’s tough. This isn’t how we had always planned this year to go,” Kimberl said. “It’s kind of hard because at this point, we would have been done with our soccer careers, and now it’s all kind of hanging in the balance, and we don’t really know what to expect.”

When the team first received news that the fall season would be postponed to at least the spring, Estrada said she wasn’t surprised. Though she said the team is still apprehensive about whether the spring season will occur, she’s happy that there’s at least the chance that she will have a final season. She said that she has been satisfied with athletic’s communication with athletes.

“They’re trying to communicate with us as best as possible because there’s a lot of questions still up for administration, and then also for us. It’s also just a question of how the pandemic goes along. I feel like they’re telling us what they can tell us when they find out things,” Estrada said. “It’s not as quick, but I mean, you can’t really ask for more during this time.”

The team started off practices with small groups of four members and no contact during drills.

They’ve now worked up to full team practices with contact and weight training in two groups. Masks must be worn when the players are in contact with each other as well as in the weight room. No athletes share equipment and each athlete is provided individual racks for lifting.

Though the team is practicing in full now, the initial lack of social interaction between the team led to some challenges creating connections with the underclassmen.

“It is hard though because even living-wise we’re so separated from them, because all the upperclassmen, we all live together, so we’re close in that way and they’re all separated in the dorms,” Kimberl said. “I definitely think the full team practices have helped them. Some of them have told me that they’re almost feeling kind of depressed, not having somewhere to go in the morning. Now having these practices to go to and being able to interact with their older teammates, I think it’s really helped them a lot to transition into college.”

Estrada agreed that the introduction of full team practices has helped build connections with the underclassmen, especially the freshmen. She said that it’s required more effort from the upperclassmen than in previous years to continue to build relationships, especially with the lack of a preseason.

“Usually every single year [the preseason] happens, it’s like an immediate bonding thing. You’re spending every single day, like two meals a day, three meetings a day, every single day for like a month, so then you really get to know people very quickly during preseason,” Estrada said. “I’d say that everybody individually has had to put in three times the effort to be able to connect with the freshmen especially.”

The NCAA announced that it would extend eligibility for fall senior athletes through a blanket waiver, though it is up to the individual program to decide how scholarships are allocated. Kimberl said that she wouldn’t take the extra year because she has already received a full-time job offer for next fall. Estrada said that she “personally doesn’t believe” she’d take the extra year if offered. She said that there are seniors on the team considering taking the extra year. Though it would pair easily with master’s programs on campus, she said that there are pros and cons to weigh for those still debating the offer.

For now, all the Phoenix can do is continue to train, practice and wait for the decision to be made regarding their spring season. For Estrada, this means maintaining their level of focus to continue to improve not just as a team, but as individuals as well.

“I think that’ll be important come this big break that we’re about to hit in making sure everyone stays motivated,” Estrada said. “We’re playing as if we’re going to have a season in the spring.”