The coronavirus pandemic has slowed the women’s cross country team, but they are still running hard 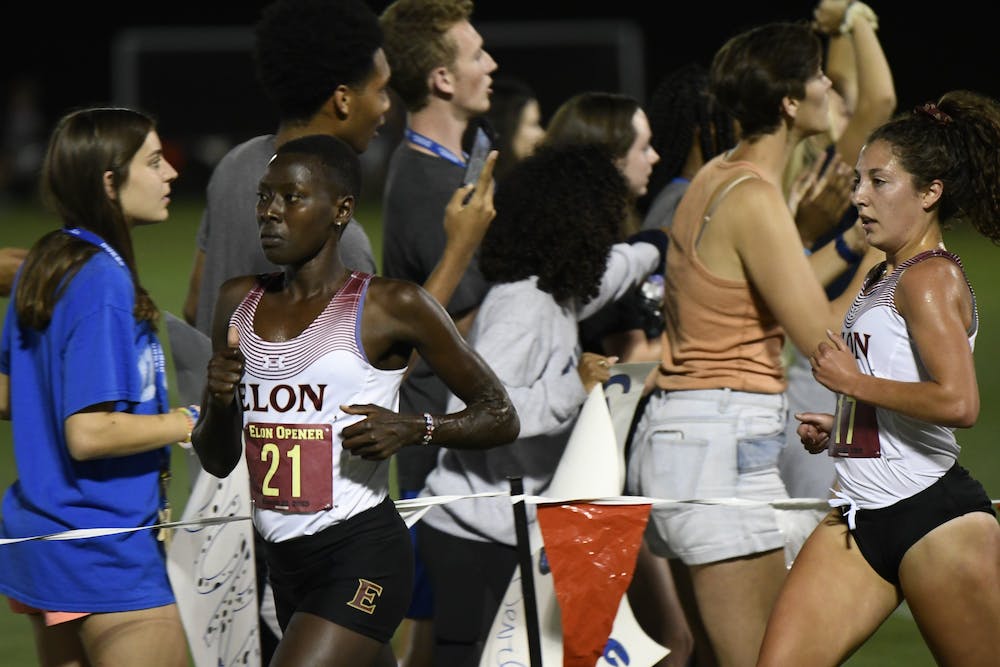 Photo by Thomas Denome | Elon News Network
Members of the Elon women’s cross country team compete in a meet during the fall of 2019. The team would go on to win the CAA championship later that year.

Bridget Kanaley and Kelley McCarten, seniors on Elon University women’s cross country team, had the news broken to them in the summer that their season would be delayed. Although tough to accept, Kanaley and McCarten put in perspective that there were bigger issues regarding the COVID-19 pandemic than their season getting delayed.

“With how things ended up in the spring, it was definitely something we’ve been thinking about just because we knew in the grand scheme of things ... our cross country season wasn’t as important as people’s health and safety,” Kanaley said. “But again, as seniors, it was upsetting, and it took some adjustments.”

"Our cross country season wasn't as important as people's health and safety.But again, as seniors, it was upsetting, and it took some adjustments."

As seniors, Kanaley said they’ve had lots of positive experiences in the past four years. She said that the biggest challenge has been accepting the fact that this season is going to be different than the others, despite their hope that their last year would be the best year.

“Once we kind of got over that, and were happy with what we have right now, it was fine,” Kanaley said.

McCarten’s biggest challenge has been re-understand “what is acceptable” and how their situation can play out.

“I feel like now that we’re moving forward with the year, it’s definitely gotten easier. We’re heading home and we’re excited for what’s to come with cross country,” McCarten said.

Cross country is one of the least contact-driven sports at Elon, so the COVID-19 protocols have been easy to adapt with. Members of the cross country team are placed into small groups — usually with the women they live with or spend the majority of their time with. When in these groups, they are allowed to remove their masks while training. However, when the team comes together, the masks go back on.

“All of our large team interactions are masked up.” McCarten said. “When we are in the weight room or any type of activity like that, we are masked up so it doesn’t really feel like we are together or a team.”

However, because cross country is such a low-contact sport, Kanaley and McCarten said they feel lucky because they can easily train alone.

“Even when things are in the very worst, you can always go out alone and go for a run and get your training.” Kanaley said. “So that’s been really nice.”

Kanaley also said that communication between the team and athletics administration since the postponement of the season has been good, especially with regard to what they could and couldn’t do with regulations set forth by the Colonial Athletic Association.

“Something we’ve talked a lot about is kind of post-winter break and our upcoming season,” she said. “The administration among athletics, like, they would love to see us compete in the sport that we love.”

“We’re working together and being positive for each other. In terms of the freshman, you definitely feel bad for them. And we kind of just remind them that like this isn’t normal and we’ve had success in the past and, like, we will get that back,” she said.

The women’s cross country team was officially told that their season will be happening from January to March. McCarten said the season will be brief, with not as many chances for meets. Since joining the CAA, the team has competed in five to seven meets per year, including the CAA Championships meet and NCAA regional Championships. They are still unsure as to what the policies will be at the meets as well. Kanaley said that the only concrete meet right now is a conference meet, with the possibility of one or two smaller meets with local teams.

Kanaley said the team is excited for the chance to compete once again. The team looks strong right now, something she said is impressive considering what they have had to go through.

“Coming off of last year, we’re really confident, and having that set date in mind and knowing we’re going to get our chance is super motivating,” she said. “We just have to keep reminding ourselves that this is going to happen.”