For some Hispanic people, economic opportunity and experiences draws them to Republican Party 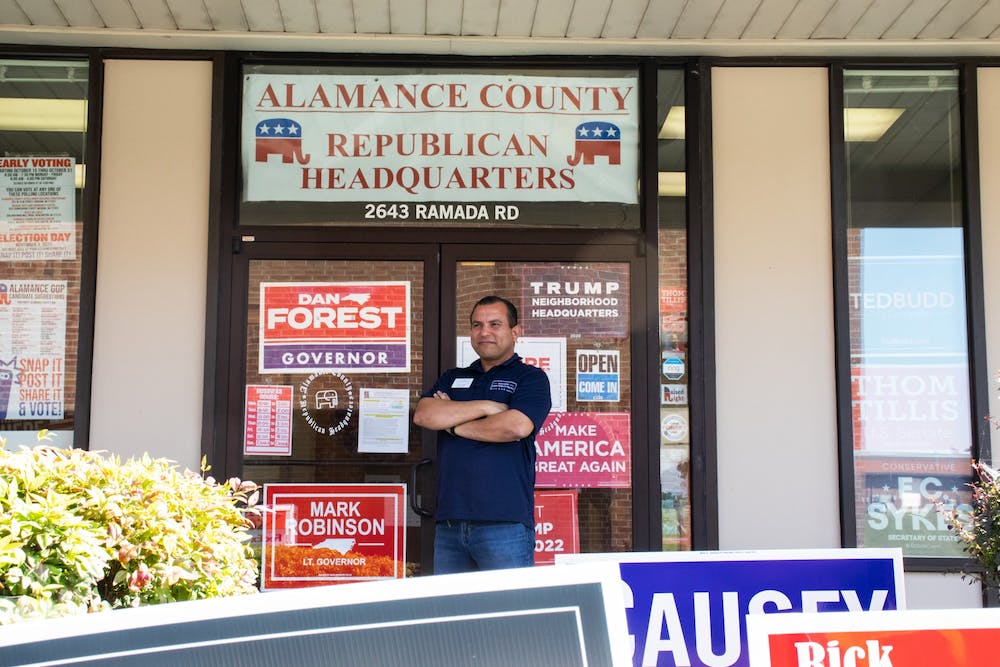 Photo by Mackenzie Wilkes | Elon News Network
Omar Lugo, a resident of Alamance County and board member of the North Carolina Republican Hispanic Coalition, wants to inform voters in Alamance County ahead of the 2020 election. Lugo believes that helping voters now, will empower them to help themselves in the future.

Omar Lugo wants to empower people to help themselves. He realized he wanted to help people after his time spent growing up in Venezuela. Lugo came to the United States as a political refugee from Venezuela. In Venezuela, his father was poisoned for fighting against Hugo Chavez’s regime.

The death of his father and growing up in Venezuela encouraged Lugo to be politically active in the United States.

“I basically received confirmation after confirmation that God was actually telling me ‘You’ve been through this, you know what it’s like living in communism, you know what is to see a country being destroyed. Your people need you,’” Lugo said. “And I’m here to serve God first off and to serve my community.”

Lugo’s lived experiences in Venezuela is why he embraces conservative politics — he said he doesn’t want to see socialism rise in the United States the way it did in Venezuela. To Lugo, there’s a difference between compassion and socialism.

“The reason why people confuse these two tendencies or these two ideologies is because it is nice to do nothing and basically receive something from the government,” he said.

Lugo said he was raised to work hard for himself and his family without relying on any assistance. When he sought refuge in the United States, he immediately began working to achieve the American dream. His first business was manning an ice cream truck.

“I came here with my mom, my younger brother, no money, no English. The little money we had was actually to pay for our legal process to go through,” he said. “And as soon as we did that, we established a business and we were able to pull ourselves out of that situation. It’s not that I’m a millionaire, but I have a better quality of life now.”

Lugo has been active in politics leading up to the 2020 election. Lugo is campaigning and advocating for President Donald Trump’s reelection as well as other Republican candidates on the ballot in Alamance County and North Carolina.

Lugo was selected to be a board member of the newly established North Carolina Republican Hispanic Coalition. With the coalition, Lugo wants to make government resources and officials more available to the community.

“In order for us to be a bridge between the government resources, knowledge and everything that is out there available for the public ... sometimes it gets lost in translation, interpretation and people actually fear ... that they don’t understand what they have that right in front of them,” Lugo said.

While Lugo has only been a member of the Republican Hispanic Coalition for a few weeks, he’s been working to elect Republicans for the past six months. Lugo has been knocking on doors and attending and hosting campaign events for local politicians, oftentimes translating people’s questions.

Lugo said he sees himself as a guide for Hispanic voters in the community. He said there’s a difference between voting and electing leaders. He wants people in the community to know that when you elect a candidate they should be the ones who are supporting policies that are favorable to Americans and not just voting for candidates for the sake of voting.

“People don’t know how to elect they actually know how to vote but that’s not enough. That doesn’t make you savvy in certain policies and points that you need to know in order for the general public to be able to elect a candidate and ones that can be actually elected,” he said.

This election cycle, Lopez — who lives in Mebane — wants to inform the Hispanic community statewide about the candidates in the upcoming election, but in the long term, he wants to see Hispanic people in office.

“But together having a voice in showcasing [that] the Hispanic communities here want to have a seat at the round table of policymaking and campaign decision making … we haven’t been considered,” Lopez said. “And I think the state GOP is … welcoming this opportunity to say ‘We think it’s a good time to start this initiative’ and make sure that the community is involved in some of these decision-making policies and connecting with legislators and whatnot to make sure that the Hispanic community is represented.”

On the ballot in Alamance County this November, there is one Hispanic candidate: Ricky Hurtado, a Democrat running for the North Carolina House of Representatives in the 63rd District.

Lopez is the son of Mexican and Guatemalan immigrants and grew up in Florida around the Hispanic immigrant community. Lopez echoed Lugo in his support for the Republican Party because of the experiences Latin American countries have endured under communist regimes.

“When we take a big picture, we see that some of these Hispanics that are leaning left or even call us names …. they’re going to their culture, going to their upbringing,” Lopez said. “But they didn’t experience what we’ve experienced in these communist communities and countries.”

Some of the defining policies for Lugo this election are fiscal. He wants to see more industries establishing their operations in the United States rather than abroad. He wants industries like the once booming textile industry in Burlington and Alamance County to return to the United States.

“We need, as a country, we need to produce things here in the states in order for us to be able to see a good return on investment,” he said.

Lugo sees the United States as a place for economic opportunity.

“The beauty of the United States of America: you have an idea, you have some money, you have the will and you prepare yourself and opportunity finds you. And that’s how you get lucky and that’s basically the American dream,” Lugo said.

For Lopez, there are three intertwining tenets that are important to him: family, faith and future.

“Whether it’s Catholicism or Christianity or whatnot, there’s a sense of religion that guides us, and in that family, and respecting the nucleus of the family,” he said. “Even in those two principles themselves, those lean towards conservative values.”

As for the future, Lopez said the economic opportunity and the willingness to work to achieve the American dream to better oneself and their family is important to him.

“We do not like to accept assistance from the government or sometimes from even our colleagues or friends,” he said. “We got to pull ourselves by the bootstraps, and we will work.”